The highlight of the New Jersey racing season is the $1.25 million Haskell Invitational Stakes (G1), featuring some of the best 3-year-olds in training go 1 1/8 miles over the Monmouth Park main track. A field of 7 went to post on a wet Sunday afternoon in Oceanport, but the eyes of the racing world including the 37,090 in attendance were on Preakness Stakes winning filly Rachel Alexandra, exiting a 19 length romp in the Mother Goose last time out and sent off at odds of 1-2. In to challenge her included 4-1 second choice Summer Bird, winner of the Belmont Stakes in his last start, and 5-1 third choice Munnings, winner of two straight Grade 2 events, the Woody Stephens and the Tom Fool. Rains throughout the day rendered the track sloppy, with temperatures in the upper 70's.

Jockey John Velazquez sent Munnings to the front soon after the start to set a quick pace of 22.99, 46.43, and 1:09.92. Rachel Alexandra bobbled slightly at the break but jockey Calvin Borel immediately sent her to challenge for the lead. Rachel Alexandra sat comfortably to the outside of Munnings down the backstretch just a length behind, with Summer Bird saving ground in third. Entering the stretch, Rachel Alexandra easily took over the lead, opening up a 5 length lead at the 1/8 pole through 1 mile in 1:34.29, and continued to widen late, cruising under the line under wraps 6 lengths in front of Summer Bird in 1:47.21 over the sloppy track, just 0.41 seconds off Spend A Buck's track record. It was another length back to pacesetter Munnings third. 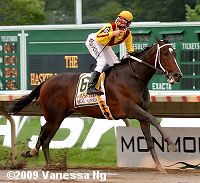 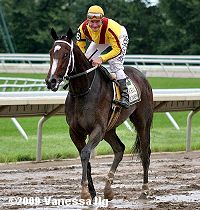 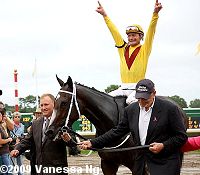 Right: Owner Jess Jackson leads Rachel Alexandra to the winner's circle. Jackson said, "I don't know what frontier she's going to conquer next, she does so well every time we raise the bar that we have to consider all options. At the same she's going to tell us when she s ready to run. We're not going to the Breeders' Cup. I've said it and I meant it. We'd love to run against Zenyatta but it has to be on a neutral course. When she's ready, I don't think there's a horse in America that can beat her." 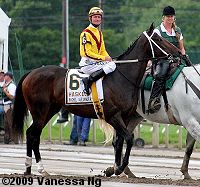 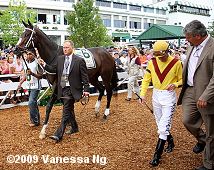 Right: Rachel Alexandra checks out the fans by the paddock while trainer Steve Asmussen discusses tactics with jockey Calvin Borel. Asmussen said, "I felt very confident that she would be able to handle the surface today. The Haskell was our major goal, and we were happy with the way she ran today. I can't tell you how amazing it is that everybody everywhere asks me about Rachel. I think it's fantastic, and Rachel is very deserving of the admiration. To compare her three races from the Preakness to the Mother Goose to today, it's hard to determine her best effort. All of her races are very special for different reasons. She can handle the crowd, the weather, nothing surprises her." 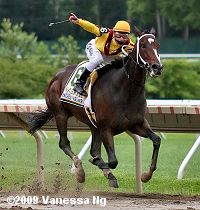 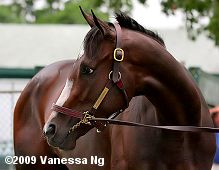 Left: Jockey Calvin Borel celebrates aboard Rachel Alexandra before the finish of the race. Borel said, "This filly is just unbelievable. I can't say how good she is. I don't know. I gave her a few taps at the 1/16 pole. I just wanted to keep her focused with a couple taps. She started looking around at the crowd, so I just kept her busy to the wire. I really didn't ask her for much run. We have not gotten to the bottom of her, that's for sure. She's an amazing athlete and I'm glad that I get to ride her."

Right: Rachel Alexandra relaxes at the barn after the race. 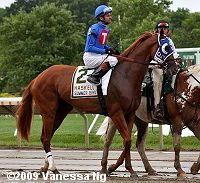 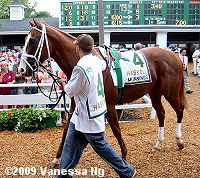 Left: Second place finisher Summer Bird in the post parade. His trainer Tim Ice said, "He was going real comfortable throughout. I'm very proud of how my horse dug in. It looked like the other horses were going to go right by him, but he fought back and pulled away for second. But that was Rachel Alexandra. That's what everyone came to see." Jockey Kent Desormeaux added, "I might have taken my horse out of his game today. I rode the racetrack thinking it was important to have enough speed to be close. He showed me a very good turn of foot and put me right in the catbird seat. Take Rachel Alexandra out of there, and we're the winner. He showed me a great deal of will and guts to hang in there and hold second."

Right: Third place finisher Munnings in the paddock before the race. The 5-1 third choice set the pace 2 paths off the rail under regular rider John Velazquez, battled between Rachel Alexandra and Summer Bird into the stretch, then tired late to finish third beaten 7 lengths. The Todd Pletcher trained son of Speightstown out of Holy Bull mare La Comete improved his record to 3 wins, 2 seconds, and 2 thirds in 8 starts, earning $547,240 for owners Michael Tabor, Mrs. John Magnier, and Derrick Smith.