The feature on Sunday at Belmont Park was the $200,000 Tom Fool Handicap (G2) for older horses sprinting 7 furlongs on the main track. A crowd of just 6,767 was on hand under sunny skies and temperatures in the upper 70's. After highweight and expected favorite Fabulous Strike scratched the day of the race, only 4 went to post with Munnings sent off as the 3-5 favorite, exiting a 5 1/4 length romp in the Woody Stephens Stakes. In to challenge him were 7-4 second choice Driven by Success, third both the Metropolitan and the Carter Handicaps, 4-1 third choice Riley Tucker, fifth in the Metropolitan, and finally 23-1 longest shot The Last Wave, making his stakes debut after finishing a close second in allowance company last out.

Riley Tucker and Driven by Success battled for the lead exiting the chute and down the backstretch through quick opening fractions of 22.10 and 44.47 over the fast main track, with Munnings sitting third just 2 lengths behind the pace duel. Around the turn, jockey John Velazquez pulled Munnings down to the rail to save ground, and then came through to pass the lead pair at the 1/4 pole when a hole opened up on the inside. Munnings quickly opened up a 2 1/2 length lead in midstretch through 3/4 in 1:08.27, and cruised under the line 2 1/4 lengths in front of Riley Tucker in 1:21.08. It was another 3 1/4 lengths back to Driven by Success third, and 15 more to The Last Wave who trailed throughout. 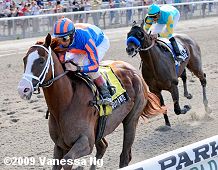 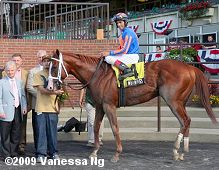 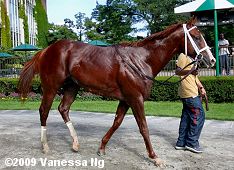 Left: Munnings in the winner's circle. His trainer Todd Pletcher said, "He's just in great form right now, he's put it all together - he's always shown us that kind of ability, but it's nice that he's developed into a professional horse. He actually reminds me a lot, not only of his daddy, Speightstown, but of Left Bank a lot, too. Just the style of running, speed and then an explosive kick to go with it. It's nice when you have a horse than can go a :44 half and then kick into a hole like that. I was a little bit uneasy running against older horses this early in the year, but I just felt like it was the right race for him. The one thing I felt was that sometimes when you win races like this, it carries a lot of weight toward the end of the year for championship honors."

Right: Munnings returns to the barns after the race. He will start next in the King's Bishop Stakes at Saratoga. 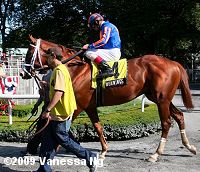 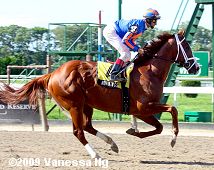 Left: Munnings heads out of the paddock before the race.

Right: Munnings in the post parade. His jockey John Velazquez said, "It's been a couple of frustrating weeks, finishing second, second, second. It's nice when it works out the way you thought. I knew the horse on the outside (Driven by Success) was going to go, and I figured (Riley Tucker) could be up close as well. When I asked my horse, he responded right away. He's grown this year. He's breaking better, and he has more confidence in himself." 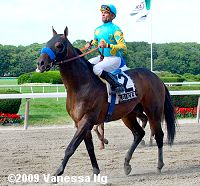 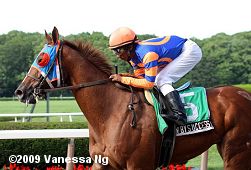 Left: Second place finisher Riley Tucker returns after the race. The 4-1 third choice broke slowly but was hustled to the lead by jockey Jose Lezcano, then drifted out on the turn allowing the winner to come through on the rail. The Bob Baffert trainee improved his record to 3 wins, 4 second, and 2 thirds in 13 starts, earning $280,405 for owner Zayat Stables LLC.

Right: Third place finisher Driven by Success returns after the race. The 7-4 second choice led briefly under jockey Rajiv Maragh before being headed by Riley Tucker, pressed the pace most of the way around and tired after 5 furlongs, finishing third beaten 5 1/2 lengths at the line. The Bruce Levine trainee improved his record to 3 wins, 2 seconds, and 4 thirds in 10 starts, earning $228,121 for owner Repole Stable.