Along with the Belmont Stakes, there were three other graded stakes events contested on the expansive main track at Belmont Park on Saturday afternoon before a crowd of 52,861. The most prestigious of these is the $300,000 Acorn Stakes (G1) for 3-year-old fillies, which kicks off New York's Triple Tiara series, comprising the Acorn, Mother Goose, and Coaching Club American Oaks. A field of nine went to post in this 1 mile main track event, with Justwhistledixie sent off as the 9-10 favorite coming into the race off a 5 race winning streak including the Bonnie Miss last out. In to challenge her included 4-1 second choice Funny Moon, an allowance winner making her stakes debut, and 11-1 third choice Livin Lovin, winner of the Tempted Stakes last out.

Jockey Javier Castellano sent 13-1 Gabby's Golden Gal to the front and she was allowed an uncontested lead of 1 1/2 lengths through fractions of 22.61, 45.39, and 1:09.01 over the fast track, with 12-1 Doremifasollatido and 29-1 longest shot Be Fair stalking her for the first 6 furlongs. Entering the stretch, favorite Justwhistledixie, who had raced in midpack fourth down the backstretch, put in a 3 wide move to challenge for the lead. However, Gabby's Golden Gal got the jump on the heavy favorite, opening up a 3 length lead at the 1/8 pole and easily holding off Justwhistledixie by 1 3/4 lengths at the line, completing the trip gate-to-wire in a time of 1:34.79. It was another 3/4 length back to late-running 18-1 Casanova Move third.

Gabby's Golden Gal suffered from heatstroke after returning to the unsaddling area and had to be hosed down and doused with ice water. She was also treated by the veterinarian and given an injection of electrolytes. She recovered and walked back to the barn afterwards, but did not get to participate in the winner's circle ceremony as a result.

Winning owner-breeder Arnold Zatcher said, "She's not real big but she puts everything into it. Bob (Baffert, trainer) calls her a little keg of dynamite. This is a good distance for her. When we bred her, at the time, we thought Medaglia d'Oro had good potential, and the dam, Gabriellina Giof, was our first winner; she won the 2002 Manhattan Beach Handicap for us. We wanted to get past that last race (6th in the Kentucky Oaks). We haven't thought about what's next, we really want to enjoy this one." 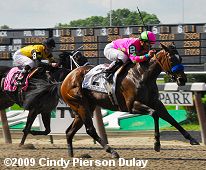 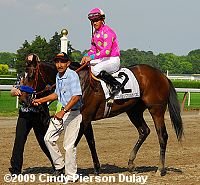 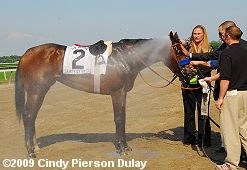 Left: Gabby's Golden Gal after the race only seconds before she started having problems. Winning jockey Javier Castellano said, "I thought when I pulled them up and she came back, she was coming back tired." Speaking about the race, he said, "I watched the replays of the couple races before, and she's a really nice filly. She does break out of the gate, and I took advantage. The track is speedy today and the rail is very good; that's the reason I took advantage. I knew handicapping the race there was a lot of speed in the race, but I broke on top and the filly gave it everything she had."

Right: Gabby's Golden Gal being hosed off in an effort to get her cooled down. The next day, assistant trainer Tonja Terranova said, "She's fine, she looks OK. As soon as she got cooled off, everything was fine. Javier said she just got a little overheated at the end. We're just going to give her a few days. Bob (Baffert) wants to come back and take a look at her to make sure she's okay and then he'll make a decision about whether she'll stay in New York or go back to California." 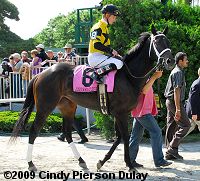 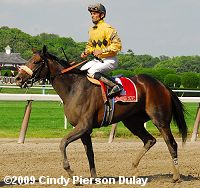 Left: Second place finisher and beaten favorite Justwhistledixie heads out of the paddock before the race. Her trainer Kiaran McLaughlin said, "This is definitely a speed-favoring track. The other one (Dream Play, last) didn't run at all. It's going to be an interesting Belmont." Her jockey Julien Leparoux said, "She ran a great race. She tried all the way, but the speed didn't back up. Speed has just been too good today. But she ran okay. I can't complain."

Right: Third place finisher Casanova Move returns after the race. The 18-1 shot raced well back in fifth on the rail early under regular rider Jose Lezcano, then came out wide into the stretch to pass tiring horses to gain third place beaten 2 1/2 lengths. The James Jerkens trainee improved her record to 1 win, 2 seconds, and 5 thirds in 11 starts, earning $187,993 for owner-breeder Edward P. Evans. 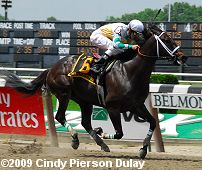 Kicking off the stakes action on Belmont Stakes day is the $250,000 True North Handicap (G2), a 6 furlong sprint on the main track. A field of six older horses went to post, with Carter and General George runner-up Fabulous Strike sent off as the 9-10 favorite over 3-1 second choice Benny the Bull, unraced since winning the Smile Sprint at Calder last July. 4-1 Two Step Salsa, winner of the Godolphin Mile in Dubai last out, completed the top three on the board.

20-1 longshot Sixthirteen broke poorly and was last out of the gate but was rushed to the lead by jockey Eibar Coa. Sixthirteen and Fabulous Strike battled for the lead down the backstretch and on the turn through very fast fractions of 21.85 and 43.62 over the "good" main track. Entering the stretch, Sixthirteen tired from the early pace allowing Fabulous Strike to open up a 3 length lead in mid-stretch through 5/8 in 55.28. Benny the Bull, who sat in midpack third early, came out 3 wide into the stretch and closed well but was left with too much ground to make up, as Fabulous Strike cruised under the line 1 1/4 lengths clear in 1:07.85. It was another 2 1/2 lengths back to 22-1 longest shot Silver Edition third. The time was just 0.19 seconds off the track record set by Artax in 1999.
Full results chart 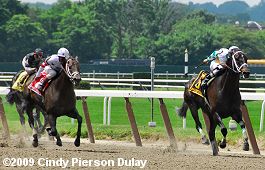 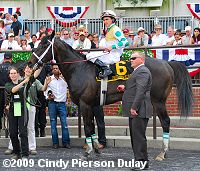 Left: Fabulous Strike in the winner's circle. Winning trainer Todd Beattie said, "He loves going 6 furlongs at Belmont. I knew we were caught up in that 21 4/5 first quarter. But I also knew that Sixthirteen had to run a lot faster because he started flat-footed. I felt comfortable that he was not going to run by us. I know the track had a speed bias, and I didn't mind that. We won't rush back into anything. I'll have to speak to Mr. (Walter) Downey to discuss our options. Fabulous Strike runs pretty hard and I don't want to abuse him."

Right: Fabulous Strike leads over Benny the Bull in the stretch. Winning jockey Ramon Dominguez said, "It was a dream trip for me with him breaking that sharp. That was going to be my No. 1 trip that I had in my mind -- to be able to clear them and come to the rail. The only thing that really changed up was when [Benny the Bull] came outside of me. At that point, there was nothing more for me to do than to keep going. We were in a suicide mission, so to speak at that point because I wasn't going to take back in the middle. I'm very pleased with the way he continued- he's really just a running machine. I was aware Benny the Bull was going to be close, but I felt we were still running so it was going to take a real, real big run from Benny the Bull. My horse wasn't backing off." 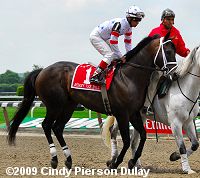 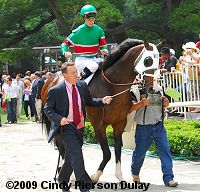 Left: Second place finisher Benny the Bull in the post parade. His jockey Edgar Prado said, "He ran great. I mean 1:07, you don't see that. How often do you see that? This is as good as it gets for today." The 3-1 second choice raced in fifth early saving ground on the turn and rallied well to get second. The Richard Dutrow Jr. trainee improved his record to 9 wins, 2 seconds, and 2 thirds in 18 starts, earning $2,271,630 for owner IEAH Stables.

Right: Third place finisher Silver Edition heads out of the paddock before the race. The 22-1 longest shot on the board was last down the backstretch under jockey Julien Leparoux, found room on the rail to pass tiring horses to get third beaten 3 3/4 lengths. The D. Wayne Lukas trainee improved his record to 4 wins, 6 seconds, and 3 thirds in 23 starts, earning $348,993 for owners Thomas Van Meter II and Phillip Maloof. 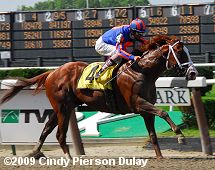 The $250,000 Woody Stephens Stakes (G2) features top 3-year-old sprinters going 7 furlongs on the main track. Sunshine Millions Dash winner This Ones for Phil was sent off as the 9-5 favorite in the field of 8, exiting two straight 2nd place finishes in the Swale at Gulfstream and the Withers and Aqueduct. In to challenge the Richard Dutrow Jr. trainee included 3-1 second choice Hull, undefeated in three lifetime starts including the Derby Trial last out, and 7-2 third choice Munnings, second in an allowance last time out after finishing 10th in last year's Breeders' Cup Juvenile.

17-1 Triumphant Flight and 4-1 fourth choice Everyday Heroes hooked up soon after the start and contested the early lead through fractions of 22.32 and 45.01 over the fast main track, with Hull sitting third a length behind. Entering the stretch, Triumphant Flight tired from the quick early pace, but Munnings, who bobbled at the start and moved up to fourth on the rail down the backstretch, found room between horses at the 3/16 pole and charged through to take over the lead in mid-stretch through 3/4 in 1:08.89. Munnings drew off in the final furlong to win by 5 1/4 lengths over Everyday Heroes in 1:20.63. It was just a head back to late-running 30-1 longest shot Kensei third.
Full results chart 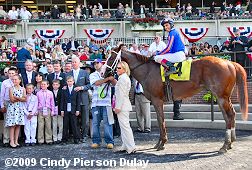 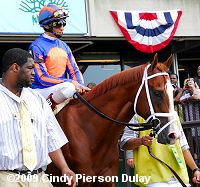 Left: Munnings in the winner's circle. Winning trainer Todd Pletcher said, "I liked the way he had been training here, and he came into the race in good shape. It was nice to see him deliver that performance. I thought his comeback race was better than most people thought because it was such a fast race. We talked about strategy a little bit. We felt we would be sitting off the leaders and in the pocket. We thought we would get lucky and get through on the inside. We had to wait longer than we anticipated. When it finally opened up, he accelerated and he kicked in big time. The obvious race we want to be ready for is the King's Bishop. It's a matter of how we get there. I might consider the Dwyer of the spacing."

Right: Munnings heads out to the track for the post parade. Winning jockey John Velazquez said, "We've always liked him. Now he's more mature and ready to roll. He saw the light and started to run. It has taken him some time to grow up and learn what to do but he's shown us he knows." 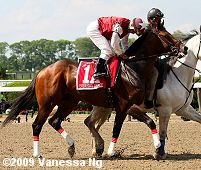 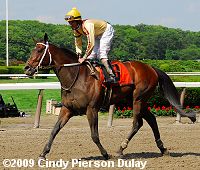 Left: Second place finisher Everyday Heroes in the post parade. The 4-1 fourth choice pressed the pace for the first 5 furlongs under jockey Jose Caraballo and bore out through the stretch finishing second beaten 5 1/4 lengths. The Tim Ritchey trainee improved his record to 4 wins, 1 second, and 0 thirds in 5 starts, earning $174,800 for owner Darley Stable.

Right: Third place finisher Kensei returns after the race. The 30-1 longest shot raced in midpack down the backstretch under regular rider Robby Albarado, was blocked behind a wall of horses at the top of the stretch, but closed well once he got clear, finishing third beaten 5 1/2 lengths. The Steve Asmussen trainee improved his record to 2 wins, 1 second, and 1 third in 5 starts, earning $108,620 for owners Stonestreet Stables and Gulf Coast Farms.