The $1 million Belmont Stakes (G1) is the final leg of American racing's Triple Crown and the highlight of the New York racing season, contested at the marathon distance of 1 1/2 miles, one complete trip around the main track at Belmont Park. A field of ten 3-year-olds went to post in the 141st "Test of the Champion" before a relatively small crowd of just 52,861 on a warm, sunny Saturday afternoon. Rains all day Friday rendered the track good early in the card, but it was upgraded to fast about 2 hours before the feature race.

As expected, Kentucky Derby winner Mine That Bird was sent off as the 5-4 favorite as the only gelding in the field, exiting his 2nd place finish to Rachel Alexandra in the Preakness last out. In to challenge the son of 2004 Belmont winner Birdstone were two colts sharing 9-2 second favoritism: Dunkirk, the Florida Derby runner-up who has been unraced since finishing 11th in the Kentucky Derby, and Charitable Man, winner of the Peter Pan and the Futurity both at Belmont Park.

Jockey John Velazquez sent Dunkirk to the lead soon after the start, and he opened up a 1 1/2 length advantage on the clubhouse turn getting fractions of 23.41, 47.13, 1:12.43, and 1:37.86. As expected, jockey Calvin Borel moved Mine That Bird down to the rail and to the back of the field for the early stages, while 22-1 Miner's Escape and 23-1 Mr. Hot Stuff pressed the pace a length behind Dunkirk. Approaching the far turn, Borel moved the rank Mine That Bird to the outside for room as he began to make his way towards the leaders. Mine That Bird gained a 1/2 length lead on Dunkirk at the top of the stretch, through 10 furlongs in a fast 2:01.66. Mine That Bird and Dunkirk battled the length of the stretch, but 12-1 Summer Bird, who raced in 6th saving ground around both turns, was moved to the outside at the 5/16 pole by jockey Kent Desormeaux for the drive. Summer Bird closed with a rush on the outside to run right by Mine That Bird and Dunkirk at the 1/16 pole to win going away by 2 3/4 lengths in a time of 2:27.54 over the fast track. Dunkirk outfinished Mine That Bird in the final strides to get second place money by a neck, and it was a long 3 3/4 lengths back from Mine That Bird to Charitable Man fourth. 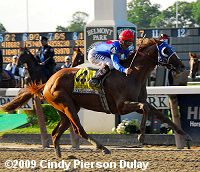 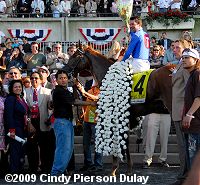 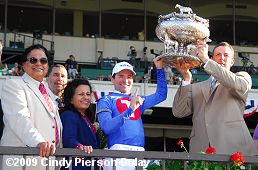 Left: Summer Bird in the winner's circle with trainer Tim Ice at his hip and owners Vilasini and Kalarikkal Jayaraman on the left.

Right: The Jayarmans watch on the left as jockey Kent Desormeaux and trainer Tim Ice hold up the Belmont Stakes trophy. "Right now it's just unexplainable. I have to thank the Jayaramans both for sticking with me. At first it was a little rough, you know. We had a nice colt coming on the way here. Picked up. They sent him to me in January. I owe everything to them. I think adding the blinkers let him focus. I think Kent Desormeaux helped a lot. With the blinkers and Kent, had they put it together and won the third leg of the Triple Crown. The horse was going great all week. Anybody that come up and ask me about him, I said this horse is going to run big. He's a good-feeling horse. He was fresh, you know. He had five weeks in between the Derby and the Belmont and that helped the colt a lot. He's still maturing, and, you know, he proved it today. We did the right thing by skipping the Preakness and waiting on the Belmont and bringing him here early." Tim Ice worked as an assistant to Kent Desormeaux's brother Keith for 5 years before going out on his own. 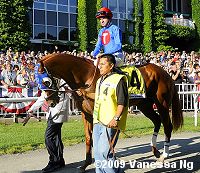 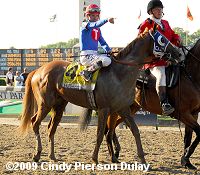 Left: Summer Bird in the paddock before the race.

Right: Jockey Kent Desormeaux celebrates as Summer Bird parades for the fans. Desormeaux, who rode the colt for the first time, sang "Happy Birthday" to the trainer at the start of the press conference. He said, "Tim had the horse breathing fire. I didn't pick up Mine That Bird till the 5/16 pole. I was riding my horse, paying attention to details, making sure he was comfortable. I thought an inside trip might help me. When I did pick him up, I was a little bit disappointed. I was like, how am I going to catch him? He's already in front of me. But when I did get that opportunity, this colt just laid down and took off. He really exploded the last 500 yards, and there was never any doubt turning for home after he changed his leads. The only way I was going to get beat was if there was somebody behind me coming, he had dead aim on the leaders. I want to congratulate (Tim Ice) on doing the right thing. He had this horse here early. It is very, very different lay of the land here at Belmont. We don't call it the Big Sandy for nothing. The track is different. The sand is different and the horses probably get a little stoved up training here the first couple of days already. They're not fast like Churchill or Pimlico." 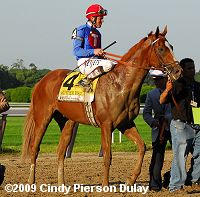 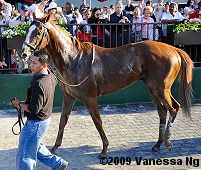 Left: Summer Bird after the race before getting his flowers.

Right: Summer Bird heads back to the barn after the race. His owner-breeder Dr. Kalarikkal Jayaraman said, "It was great, it was like a dream winning the Belmont. Oh yes we were yelling! It took a long time to get to the races, not that he had any problems. We kept him in the farm, trained him at the farm and on the track. We thought he was a good horse. As a 2 year old last year, he was a standout in the room. He was strong. He never had any physical problems, but he didn't have the explosive speed of a sprinter. He was a standout. All the rest of the work was done by Tim Ice and I thank him. Thank you Tim, and Kent, for his beautiful ride. 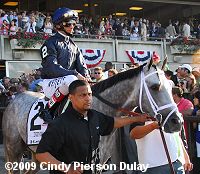 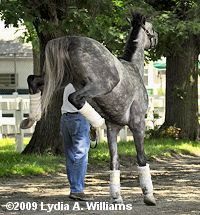 Second place finisher Dunkirk heads out to the track for the post parade. His trainer Todd Pletcher said, "He ran well. I told Johnny the same thing I told him all week, we wanted him to get into his rhythm. He made the lead very easily and we were very happy with that. At the 3/8 pole, we thought he might have been lucky."

Right: Dunkirk acts up on his way to the detention barn before the race. His jockey John Velazquez said, "He battled every step of the way. He just got tired late, but he ran a huge race. He was definitely tired when I pulled him up, and he tied up. I hosed him down, and he seemed to be okay. I couldn't believe I was on the lead early. There was no pace. The way he broke, he was already there on the lead, so I didn't want to hold him back. I didn't see Mine That Bird, and he came to me at the 1/8 pole. Then, I got after my horse and he put up a real good fight and came back to beat Mine That Bird for second. He just ran his eyeballs out, but unfortunately, we just got beat." 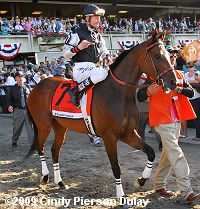 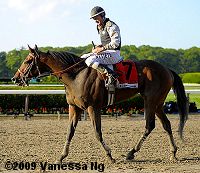 Left: Third place finisher and beaten favorite Mine That Bird heads out for the post parade. His trainer Chip Woolley said, "We're disappointed, down a little bit, but the colt did run a big race. Calvin rode a good race. I thought we might have gone ahead early. Hard to say that when you haven't seen the replay. I heard Calvin say the horse was kind of fresh down the backside, kind of getting up into the bridle. That's kind of something he hadn't been doing in the past. I was a little concerned with the horse when he went to the holding barn today. He was a hair more, a little more amped more than he had been previous races, you know. Maybe I had him a hair too fresh. Maybe I should have done something different when we got here. But it's hard to say. Like I said, he might have been a hair higher today coming in here, just a little more amped up. But overall, he was the same colt that led up in the Derby. He run a great race."

Right: Mine That Bird returns after the race with a somewhat downtrodden looking Calvin Borel. Borel said, "I had a good trip. He was a little bit more forward, like I expected going around the half, and down the back side I thought he might win. When I moved him, I was happy to get over a little bit, save a little ground, no excuses. He ran his eyeballs out. I knew the fence wasn't good. It's kind of deep down there. When I eased him out, he took me a little earlier than I wanted. So I let him go on. They kind of come back to me pretty quick. From the 1/8 pole to the wire, I was still comfortable. Last 40 yards he kind of threw the towel in. The horses in front kind of stopped, like a walk the last 1/4 mile. He bellied down when (Dunkirk) come up to the outside. He just got no excuses, nothing but race track in front of us. He ran his heart out, and I wouldn't give up for nothing in the world." 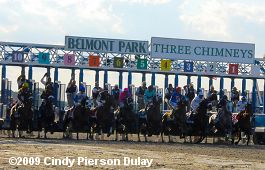 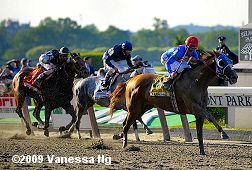 Left: The horses break from the gate in the 141st Belmont Stakes.