The $200,000 Peter Pan Stakes (G2) at Belmont Park, strategically placed between the Kentucky Derby and the Preakness Stakes, is used by horses ducking the main Triple Crown competition and preparing for a late invasion in the Belmont Stakes in four week's time. A field of just 7 three-year-olds went to post in this 1 1/8 mile trip around one turn of Belmont Park, on a cloudy day with a temperature of about 70 before just 5,264 paying spectators. Futurity Stakes winner Charitable Man was sent off as the 8-5 favorite exiting a poor 7th place finish in the Blue Grass Stakes last time out. In to challenge the Kiaran McLaughlin trainee included 9-4 second choice Imperial Council, fifth in the Wood Memorial after finishing second in the Gotham, and 3-1 third choice Hello Broadway, winner of an allowance at Keeneland last out after finishing seventh in the Tampa Bay Derby. 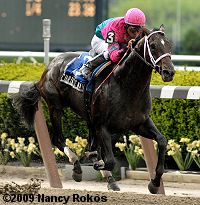 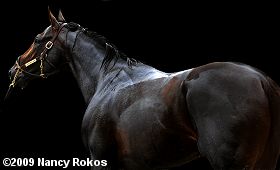 Charitable Man gets a bath after the race. Winning jockey Alan Garcia said, "He broke good today. He was on the lead, and then he wanted to kind of slow a little bit and I saw (Hello Broadway), run away from him and I thought, 'Okay, let me see' and I thought it was going to be a clear trip. Quarter for quarter, I feel (Imperial Council) coming a little bit and then (Charitable Man) switched the lead and he started running, he took off. (When Hello Broadway was in front) I thought he was going to come back. I was sitting there, I knew it was a comfortable pace, comfortable time, but I didn't think that horse could keep going the way he was running."

Winning trainer Kiaran McLaughlin said, "(After the Blue Grass) he cooled out in five minutes. He disliked the Polytrack. We figured that, and Mr. (William) Warren (owner) was very kind enough and patient enough not to wheel him right back in the Kentucky Derby or the Preakness. He settled well. Alan Garcia deserves a lot of credit. He did everything right and rode a great race. We'll talk with Mr. Warren about the possibility of the Belmont. We'll take a look and see how the Preakness goes. But he is definitely bred to get 1 1/2 and he likes this track and he did it the right way today, so we'll look at it."

Shug McGaughey, trainer of second place finisher Imperial Council, said, "It worked out fine. I thought around the turn he had it, but he was second-best today. We'll take a look at a race like the Dwyer next for him."