The $250,000 Gotham Stakes (G3) at Aqueduct is the first major Triple Crown prep in New York, with the winner earning a free nomination to the Wood Memorial, run in four week's time. A field of nine 3-year-olds went to post in this 1 1/16 mile inner track feature, contested under overcast skies and temperatures in the 60's before just 5,154 fans. Mr. Fantasy, undefeated in two starts against New York-bred company and making his stakes debut for trainer Kiaran McLaughlin, was sent off as the 2-1 favorite over 3-1 second choice I Want Revenge, shipping in from California where the son of Stephen Got Even was second in the CashCall Futurity and then third in the Robert B. Lewis last time out. Imperial Council, winner of his last two starts and making his stakes debut, was the 4-1 third choice for trainer Shug McGaughey.

When the gate opened, jockey Alan Garcia sent Mr. Fantasy to the lead and down on the rail to save ground around both turns, while Joe Talamo aboard I Want Revenge moved up to press the pace to his outside, through fractions of 23.76, 48.45, and 1:12.69 over the fast track. Turning for home, Talamo asked I Want Revenge for run and got it, as he quickly shot to the front opening a 2 length lead in mid-stretch. Imperial Council, who was 8th early, put in a strong rally down the center of the track but was left with too much ground to make up, as I Want Revenge cruised under the line 8 1/2 lengths in front, completing the trip in 1:42.65. It was just a head back from Imperial Council to favorite and pacesetter Mr. Fantasy in third.

The race prior to the Gotham was the Toboggan Handicap (G3) for the older sprinters. Results and photos for that race are below. 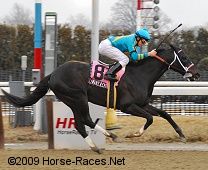 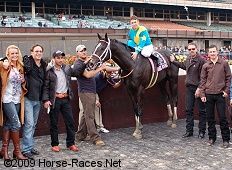 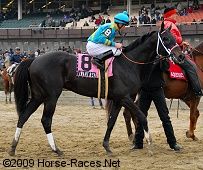 Left: I Want Revenge in the winner's circle.

Right: I Want Revenge returns after the race. Winning trainer Jeff Mullins said, "The horse was closer than I really wanted him to be. The horse kind of towed (jockey Joe Talamo) up there and (Talamo) stepped on him the whole way. I guess he knew what he was doing. We thought the dirt would move him up; I don't know if that's what did it or not. We might have just picked the right spot." 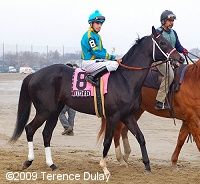 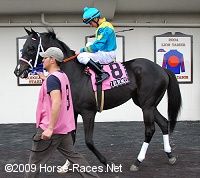 Right: I Want Revenge in the paddock before the race. Winning jockey Joe Talamo said, "I have to give all the credit to Jeff. He's kept him fresh this whole campaign. I had so much horse the whole way around. Me and Alan (Garcia aboard Mr. Fantasy) were going pretty slow, but at the 1/4 pole, my horse just took off. There is no comparison between real dirt and synthetic – he really took to it. I had so much horse, I was smiling once he inherited the lead. Just an unbelievable animal. When we went past the 3/16 pole, I was smiling. We'll be back in four weeks." 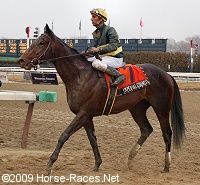 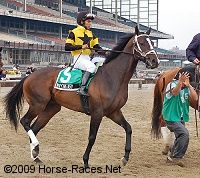 Left: Second place finisher Imperial Council returns after the race. His jockey Rajiv Maragh said, "This is a really talented horse that is going to appreciate more distance. He's the best three-year-old I've ridden in New York. He galloped out tremendous."

Right: Third place finisher and beaten favorite Mr. Fantasy scares his groom while acting up as he heads out for the post parade. His trainer Kiaran McLaughlin said, "They've got good races out on the West Coast. Why didn't (I Want Revenge) stay out there? The best horse won today. We were second-best, even though we didn't get second. If that horse doesn't ship East, we win by five." His jockey Alan Garcia added, "He ran good – he got tired, but he ran so hard. He was a little warm in the paddock, just so happy to run, but he warmed up and settled down. I'm very happy with the way he ran. He's a nice horse and we can do better than that next time."


Immediately before the Gotham, a field of nine older horses sprinted 6 furlongs on the inner track in the $100,000 Toboggan Stakes (G3). Driven By Success, winner of three straight but making his stakes debut, was sent off as the 9-5 favorite over 7-2 second choice Lucky Island, exiting a fourth place finish in the Gravesend last out. 5-1 third choice Eternal Star shipped in from Laurel Park where he was fourth in the General George last month.

15-1 West Coast Flier battled for the lead with 8-1 Grand Champion through fractions of 22.11 and 44.77, with favorite Driven By Success just behind them in third. Entering the stretch, the pace battle took its toll, as all three faded from contention. 44-1 longest shot Saint Daimon, who pressed the pace in fourth down the backstretch, inherited the lead in mid-stretch through 5/8 in 57.28, but the race set up perfectly for the closers. 7-1 Ah Day, who was last early, unleashed a powerful 6-wide rally through the lane to get up by a head over fellow closer Eternal Star in 1:10.28 over the fast track. It was another 3/4 length back to Saint Daimon third, while favorite Driven By Success finished fifth. 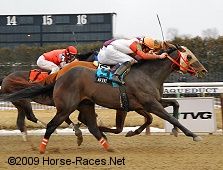 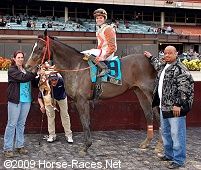 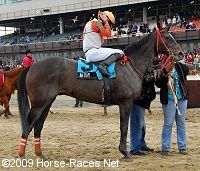 Right: Ah Day returns after the race. Winning jockey Sheldon Russell, celebrating his first stakes win, said, "Coming off the layoff, he was a tad slow coming out of the gate, and King's orders were not to rush him. There was a lot of speed in the race. He took himself back from being slow out of the gate, and I pretty much just sat on him, sat on him and saved as much ground as I could. I just angled him out and he came running. The horse was very ready and worked very well at Laurel. I am very grateful to King giving me the chance." 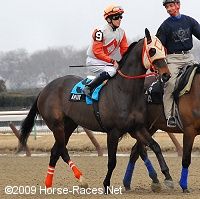 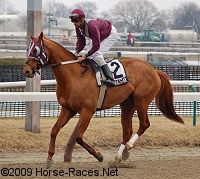 Left: Ah Day in the post parade. Avon Thorpe, assistant to trainer King Leatherbury said, "He ran awesome. He's been training good. He came back slowly and took his time. Then, he just did what he normally does, ran big. I have no idea what's next."

Right: Second place finisher Eternal Star warms up before the race. The 5-1 third choice raced in 7th down the backstretch under jockey Julian Pimentel, came out five wide into the stretch for his rally, gained the lead at the 70 yard pole but was beaten a head in the final strides. The Michael Trombetta trainee improved his record to 9 wins, 5 seconds, and 1 third in 20 starts, earning $497,420 for owners Harry and Tom Meyerhoff. 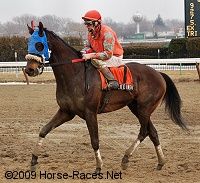 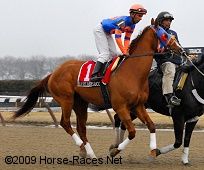 Left: Third place finisher Saint Daimon returns after the race. The 44-1 longest shot tucked in behind the early leaders in fourth early under jockey Jean-Luc Samyn, then came out four wide to pass the tiring pacesetters, inheriting the lead in mid-stretch but yielding late to finish third beaten just 3/4 length. The Steven Jerkens trainee improved his record to 5 wins, 2 seconds, and 6 third in 25 starts, earning $276,335 for owner-breeder Hobeau Farm.

Right: Fifth place finisher and beaten favorite Driven by Success in the post parade. His jockey Rajiv Maragh said, "My horse has a lot of speed and we definitely wanted to make the lead. Unfortunately, we had company through a demanding half. If you look, none of the horses in the top three that were chasing the pace finished anywhere. My horse showed a lot of guts to finish where he did." His trainer Bruce Levine said, "He got off a little slow and kind of rushed up. That might have hurt him. We'll see what happens."