The $750,000 Wood Memorial (G1) is New York's major prep race for the Kentucky Derby and the Triple Crown. A field of eight 3-year-olds (7 betting interests) went to post in this 1 1/8 mile feature, one complete circuit of the Aqueduct main track. Just 7,209 paying fans were on hand under overcast skies and temperatures in the low 50's. As expected, Gotham Stakes winner I Want Revenge was sent off as the 1-2 favorite, now running for new co-owners IEAH Stables. In to challenge the son of Stephen Got Even included 5-2 second choice Imperial Council, who was second in the Gotham, and the George and Lori Hall-owned entry of Atomic Rain and West Side Bernie, coupled in the betting as the 10-1 third choice.

When the gate opened, I Want Revenge broke poorly and found himself at the back of the field for the first half mile, while 16-1 Lord Justice was sent to the early lead by jockey Chuck Lopez. Lord Justice set slow early fractions of 24.50, 48.13, and 1:12.32 over the fast track while as many as 1 1/2 lengths in front of Atomic Rain and Imperial Council who stalked him to his outside. Turning for home, 16-1 Just a Coincidence, who sat midpack early, put in a bid for the lead on the outside and got to the front with a furlong remaining, getting the mile in 1:37.33. I Want Revenge moved up on the turn to 5th but found himself behind a wall of horses at the 1/4 pole. However, at the 3/16 pole jockey Joe Talamo found a hole and immediately took advantage, as I Want Revenge quickly accelerated past four horses in the final furlong to get the win by 1 1/2 lengths in a time of 1:49.49 over West Side Bernie. It was another 1 1/4 lengths back to Just a Coincidence third. 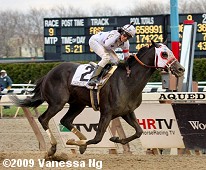 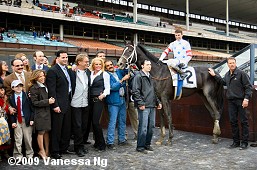 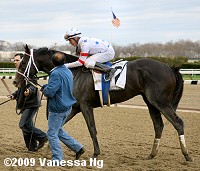 Left: I Want Revenge in the winner's circle with a much larger group than for the Gotham with his new co-owners IEAH Stable joining in.

Right: Jockey Joe Talamo gives him a pat before going in the winner's circle. Talamo said, "At the break he kind of reared up a little bit. But he actually had a great trip. He was on the rail the whole way and got to save ground. At the 1/2 mile pole, he was moving so good it was just a matter of if he could get out. He was just cruising at the 1/4 pole and was covered up, then when I found a seam I asked him and he just kicked it home. I thought today was a fairly easy race for him. To be honest, he only ran the last 1/8 mile, so I don't think it took too much out of him. He just keeps getting better and better." 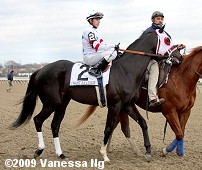 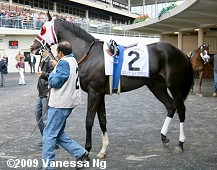 Right: I Want Revenge in the paddock before the race. Winning trainer Jeff Mullins said, "(When he missed the break) I was already heading back to the barn at that point. But Joe was patient, and it says a lot for a young rider. He saved his horse and waited for the right time to let him go. He got bottled up behind horses - when you have the rail you're worried about that anyway - but when you miss the break it makes it that much tougher for him to overcome. What he did today is pretty special. He had every trouble you could have in a race and still overcome it. That's as good as it gets right there - we've got one more show to go to and if he can win that one he's a pretty special animal." Mullins said I Want Revenge would ship to Churchill Downs on Monday. 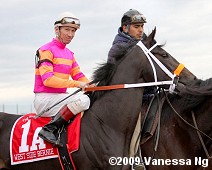 Second place finisher West Side Bernie in the post parade. His trainer Kelly Breen said, "When Stewart (Elliott) got clear and got the dirt out of his face at the top of the stretch, he really kicked in. Asking Stewart about going to Kentucky, he said they have the ground and you can take as much into context as you want about whether he's bred for it or not. But he seems to like the distance. The 2-horse (I Want Revenge) ran a great race got left and had a ton of horse left. But the Kentucky Derby, I don't want to say it's a once in a lifetime shot, but it would be my first shot, knock on wood. If this horse comes out of the race good, then we're all systems go." 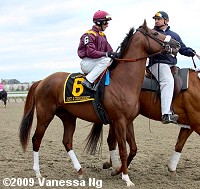 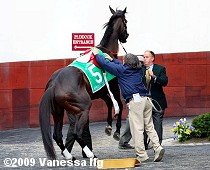 Left: Third place finisher Just a Coincidence in the post parade. His jockey John Velazquez said, "Down the lane, I thought he was going to run really well, but then he flattened out at the 1/8 pole. It was the first time he went two turns in a while, and he just flattened out. He's still a big baby. He's a little behind everybody else. He's still very green, and everyone seems to be a little bit faster."

Right: Fifth place finisher Imperial Council, the 5-2 second choice, was very fractious in the paddock before the race, rearing up several times and even fell on his side. This undoubtedly contributed to his 5th place showing, beaten 9 lengths at the line. Trainer Shug McGaughey said, "Edgar (Prado) said he was out of horse at the 3/8 pole. He was glad with the way the horse warmed up, and he was satisfied with where he was placed and moving easily. When Edgar called on him, he wasn't there. There's no chance he's going to the Kentucky Derby." 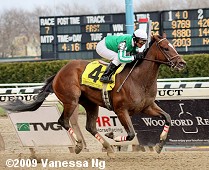 Kicking off the stakes action on Wood Memorial day was the $200,000 Bay Shore Stakes (G3), also restricted to 3-year-olds but sprinting 7 furlongs. Hutcheson Stakes winner Capt. Candyman Can was sent off as the 6-5 favorite in the field of 9, exiting a disappointing fourth in the Fountain of Youth last out. In to challenge him included 7-2 second choice Taqarub, 9th in the Fountain of Youth after winning the Jimmy Winkfield, and 9-2 third choice Not for Silver, second in the Private Terms last time out.

49-1 longest shot Yano went to the front early under jockey Harry Vega and he set early fractions of 22.51 and 45.19 while being stalked by Taqarub and Capt. Candyman Can down the backstretch. Turning for home, Yano continued to lead by was soon passed. Capt. Candyman Can quickly opened a 2 length lead on Taqarub in midstretch, getting 3/4 in 1:09.91, and drew off late to win by 3 3/4 lengths in 1:22.99. It was another 1 1/2 lengths back from Taqarub to pacesetter Yano third.
Results Chart from DRF. 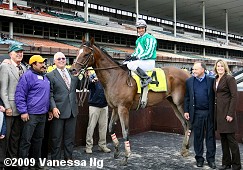 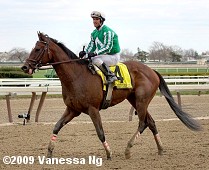 Left: Capt. Candyman Can in the winner's circle. Winning jockey Javier Castellano said, "There was a lot of speed in the race and my horse broke good but not fast enough to get up with the speed. He broke a little slow, and I'm glad he did that because I had a chance to set up a little bit and ride up to the speed. I was looking for a good spot and I got it. When I asked him, he took off. I looked for the point and he really went after it."

Right: Capt. Candyman Can returns after the race. Winning trainer Ian Wilkes said, "I am very happy. Our plan was to settle. I asked Javier to give me four lengths at the start; after that, it was up to him. I thought there'd be more speed in the race. I think he'll run 3/4, 7/8, he's a one-turn horse. I think he might stretch out to a mile later on. Our ultimate goal is the King's Bishop. In between we have several options. Right now, I am going to enjoy this." 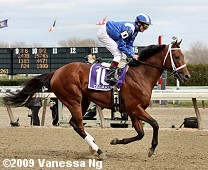 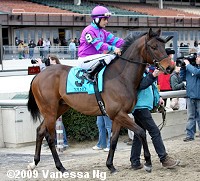 Left: Second place finisher Taqarub in the post parade. His trainer Kiaran McLaughlin said, "He had a great trip, we were just second best today. The winner is a very nice horse and congratulations to Ian (Wilkes) and all his connections. We were second-best best and happy to be there. What's next? That's a good question. Maybe the Woody Stephens on Belmont Day? We'll have to look and see."

Right: Third place finisher Yano heads out of the paddock before the race. Yano sprinted to a clear lead along the inside under regular rider Harry Vega and continued to lead to the 3/16 pole before giving way. The Valora Testerman trainee improved his record to 2 wins, 1 second, and 1 third in 4 starts, earning $57,260 for owner Roland Reeley.