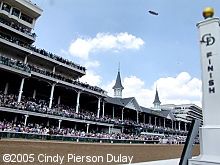 Here is my latest look at the list of top contenders for the 2009 Kentucky Derby to be run on May 2nd at Churchill Downs. The prep races are just getting started as the newly turned 3-year-olds begin their campaigns for the coveted Triple Crown races. Expect this list to change drastically over the next few months as some good at age 2 fail to progress and unknown but improving 3-year-olds pop into the picture.

Below is the current list of contenders with their trainer, jockey, and dosage index. Be sure to click the link on each horse's name to view full info, stats, and a photo where available. Jockey assignments are starting to firm up but a couple of the contenders are still without a confirmed rider. The Experimental Free Handicap is out now and there are quite a few dual qualifiers this year. An asterisk (*) by the name in the list below indicates a dual qualifier. The early Triple Crown nominations closed on January 24 and were released February 8th with only 401 horses nominated this year, down 11%. Late nominations closed on March 28 and 11 more horses were added.

Notes: The Pamplemousse is off the trail as of 4/5 due to a tendon injury. Announced on 4/6 that Quality Road has a quarter crack in his right hind foot that makes his status uncertain. Old Fashioned was injured in the Arkansas Derby on 4/11 and is out indefinitely and has been retired. Terrain is not going according to his trainer and Theregoesjojo out with a minor injury as of 4/14. Mafaaz moved to Kiaran McLaughlin and not going as of 4/16. Charitable Man not going as of 4/17. Giant Oak not going as of 4/20. Quality Road has a second quarter crack in a different hoof discovered on 4/24. As of 4/27 Quality Road is out due to his foot problems. On 4/28 Square Eddie out due to a recurring shin injury. Win Willy out as of 4/29 with an ankle proble.

Get a head start on handicapping the Kentucky Derby here: