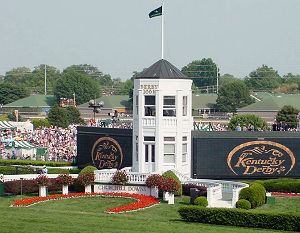 Fillies in the Kentucky Derby

The filly Stardom Bound was planning to enter the Kentucky Derby this year, unfortunately she did not make it to the race. So far 39 fillies have been entered in the Kentucky Derby, the last time was in 2008 when Eight Belles ran 2nd behind Big Brown then tragically broke down after the race and had to be euthanized. Before that was in 1999 when both Excellent Meeting and Three Ring took on the boys. Only three fillies have managed to win the Derby: Regret in 1915, Genuine Risk in 1980, and Winning Colors in 1988. There have been seven others to finish in the money, five in 3rd and two 2nd. Before Eight Belles was 2nd in 2008, you had to go all the way back to Prudery, who was 3rd in 1921, to find a filly finishing in the top three.

Here is a chart of all the fillies in the Kentucky Derby with their odds (* indicates the post time favorite) and finish position with winners in bold. There are no odds available for the races before 1900. Life's Magic and Althea in 1984 were a coupled entry.