The $300,000 Carter Handicap (G1) for top older sprinters is the co-feature on Wood Memorial day. A field of 8 contested this 7 furlong dash on the main track, with the 2-horse entry of Kodiak Kowboy and Biker Boy sent off as the 2-1 favorite, each co-owned by Fox Hill Farms. Kodiak Kowboy finished second in the Duncan F. Kenner Stakes at the Fair Grounds last time out, while Biker Boy was making his stakes debut after winning four allowance races in a row, all by open lengths. In to challenge them included 5-2 second choice Fabulous Strike, second in the General George at Laurel after winning both the Fall Highweight and the Gravesend, and 3-1 third choice Tale of Ekati, fourth in the Richter Scale last out after just missing in the Cigar Mile.

Fabulous Strike set the pace down on the rail through fractions of 22.23 and 44.52 while being stalked by 18-1 Driven By Success to his outside. Fabulous Strike continued to lead to mid-stretch, opening up a 1 1/2 length advantage at the 1/8 pole and getting 3/4 in 1:09.26. However, Kodiak Kowboy, who was reserved in 7th early, came out 5 wide for the drive and closed well down the center of the track to get up by a head, completing the trip in 1:22.47 over the fast surface. It was a long 2 lengths back from Fabulous Strike to Driven by Success third. 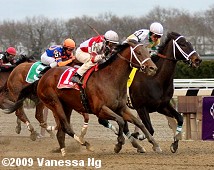 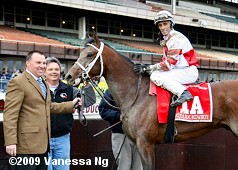 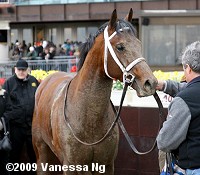 Kodiak Kowboy in the winner's circle. Tom Ludt, president of Vinery Stables, co-owner of Kodiak Kowboy said, "We couldn't be happier. He's got two Grade 2's at Saratoga (Amsterdam and Saratoga Special) and now a Grade 1 here. He loves New York. We got a prep race into him at the Fair Grounds, we aimed for this spot and we're going to aim for another Grade 1 at Saratoga (the Forego). It was a great race to start off the year. Now, we've got Friesan Fire to win the Derby."

Right: Kodiak Kowboy heads back to the barn after the race. 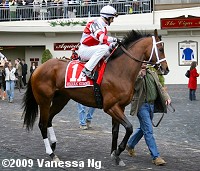 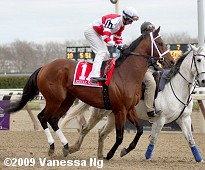 Left: Kodiak Kowboy in the paddock before the race.

Right: Kodiak Kowboy in the post parade. Winning jockey John Velazquez said, "He makes you work for it, but he runs. At the 1/8 pole, I was very confident, and when I got to the 1/16 pole, he started to slow down a little bit. I said, 'Oh no, buddy, you got to keep going.' Then, he jumped a foot print near the wire, and I said, 'My gosh!' He gave me the impression that he was going to pass, one he got rolling on the turn, I knew I had a pretty good shot to win it." 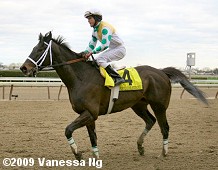 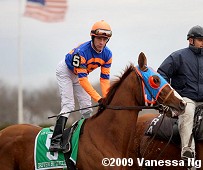 Left: Second place finisher Fabulous Strike returns after the race. His jockey Ramon Dominguez said, "I had a great trip other than that I got pressured pretty hard the whole way around, and we ended up going quicker than you want to for this distance. I was very proud of my horse, he ran hard and fought until the end. He just got outrun the last few strides."

Right: Third place finisher Driven by Success in the post parade. His trainer Bruce Levine said, "This is about the toughest race. A real Grade 1. I was proud of him. He never quit trying. I'll probably keep him in stakes company, but figure out where the first two ain't running and take it from there." Jockey Mike Luzzi added, "I guess (#3 True Quality) couldn't make the lead, so instead of laying third, we were laying second. We kept going and then horse came from behind and got the lead and my horse ran well. I think maybe he might want to do more than 7/8." 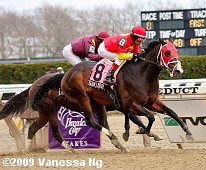 The $200,000 Excelsior Handicap (G3) featured a field of 8 older horses going 1 1/8 miles on the main track. Barrier Reef, exiting two straight wins in the Evening Attire and the Stymie, was sent off as the 5-4 choice over 3-2 second choice Cool Coal Man, fifth in the Gulfstream Park Handicap last time out. Kurbat, winner of an allowance at Laurel after competing in stakes company in his native Chile, was the 5-1 third choice on the board.

Jockey Chuck Lopez sent Cool Coal Man to the front immediately but he was soon challenged by 14-1 Giant Moon just to his outside on the clubhouse turn through slow fractions of 25.45, 50.69, and 1:14.76 over the fast track. Entering the stretch, jockey Edgar Prado asked Giant Moon for run and got it, as he surged to the front at the 1/8 pole, getting the mile in 1:38.62. The pair battled for the final furlong, but Giant Moon outfinished Cool Coal Man in the final strides to get the hard-fought 1/2 length win in 1:50.90. It was another 2 lengths back to late-running favorite Barrier Reef third.
Results Chart from DRF. 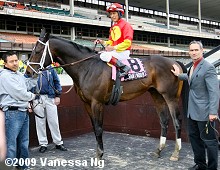 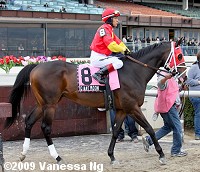 Left: Giant Moon in the winner's circle. Winning trainer Richard Schosberg said, We've had all the patience in the world with this horse. The main thing is his feet right now look like the way when God put them on originally. Last year, after the Preakness, his feet got away from him. It was a great comeback. It was his third race off a layoff and he figured to move forward. The fractions were an advantage to the two front-runners. I would rather see that than have him stalking a 46 3/5 pace. It worked out great. Now, he's a Grade 3 stakes winner with a lot of pedigree. Obviously, we're not going to come back in three weeks against New York-breds. We'll stay in the handicap division. He's gone Grade 3, now let's step it up to the next level."

Right: Giant Moon heads out of the paddock before the race. Winning jockey Edgar Prado said, "He was close to the pace and he had a really good break and was in position every step of the way. I was very happy with what it was and it was only a matter of time. The pace was fine and I knew to stay close. I put on a little pressure, and I knew he would respond. He does everything so easy." 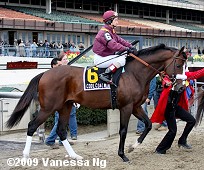 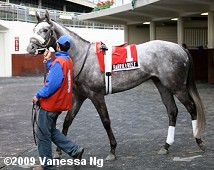 Left: Second place finisher and beaten favorite Cool Coal Man heads out for the post parade. Tim Poole, assistant to trainer Nick Zito said, "He ran hard. I thought we were safe with those fractions; however, the other horse had him measured and we couldn't get by him." Jockey Chuck Lopez added, "The horse ran his guts out, it's a shame he didn't win. I don't like to see them run that hard and not win, if I had things my own way. The other horse (Giant Moon) was better today, that's all."

Right: Third place finisher Barrier Reef in the paddock. His jockey Ramon Dominguez said, "He ran great; unfortunately the pace didn't materialize like I thought it would. I wanted to go quicker. 25 and change for this type of horse - that's walking. Every bit of pace definitely works to his advantage, and we didn't get that today. Having said that, the winner and the horse that ran second really came home strong. I feel we were a victim of the pace." 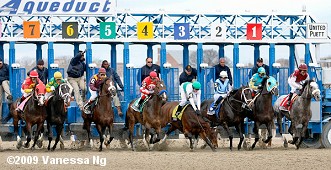 Today seemed to be a day for bad starts, but Kurbat (#4) who went to his knees at the start of the Excelsior was not able to recover like I Want Revenge did in the Wood Memorial, and finished last.