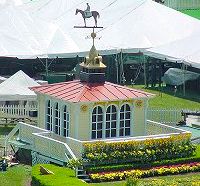 Kentucky Oaks winner Rachel Alexandra may run in the Preakness for her new owner Stonestreet Stable, but they would have to pay a $100,000 supplement fee to enter since she was not nominated to the Triple Crown. If she runs, she would be the first Oaks winner ever to run in the Preakness. Because she would be a supplemental entry which would be last in priority to get into the 14 horse field, she may be excluded from the race. There were plans to enter two horses for no reason other than to keep her out of the Preakness: Indy Express and Luv Gov. The first is a maiden who is winless in 9 starts but is owned in part by Mark Allen, owner of Mine That Bird, and the other, owned by Marylou Whitney, just broke his maiden on Derby day in his 10th career start. Owner Ahmed Zayat, who had 22 horses nominated to the Triple Crown, has declined to enter another horse besides Pioneerof the Nile just to keep Rachel Alexandra out.

Later in the day, John Hendrickson, husband and racing and breeding manager for Marylou Whitney, the owner of Luv Gov, has said they planned to enter him all along, but if their horse would be the cause of keeping Rachel Alexandra out of the race, they would withdraw him. He said, "She is a star and I want to see her run. We've only seen the back end of her. We're craving for stars and she's amazing to watch. I feel like we all own her. We don't enter to exclude anyone; we enter because we think we can win."

Mark Allen has also backed down from his plan to enter Indy Express, likely due to all the negative comments on the strategy. When asked about the uproar caused by his strategy, Allen said, "I don't think we caused the uproar. I think that this filly being bought and them supplementing her into this race caused the uproar."

Be sure to click the link on each horse's name to view full info, stats, and a photo where available.