The Friday before Preakness Day at Pimlico Race Course features several stakes races, highlighted by the $150,000 Black-Eyed Susan Stakes (G2). A field of eight 3-year-old fillies contested this 1 1/8 mile trip over the main track, before a crowd of 23,892 enjoying temperatures in the 70's and mostly sunny skies. Casanova Move, second in both the Davona Dale and Bonnie Miss at Gulfstream Park, was sent off as the 8-5 favorite over 5-2 second choice Payton d'Oro, winner of three straight going in, including the Instant Racing Stakes at Oaklawn last out. 3-1 Don't Forget Gil, winner of the Florida Oaks but second in the Comely in her last start, completed the top three on the board. 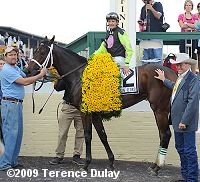 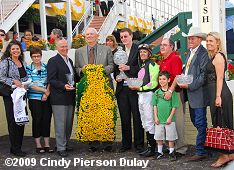 Left: Payton d'Oro in the winner's circle with her trainer Larry Jones at her hip. Jones said, "She's really gotten better ever since she's gone around two turns. This filly is very talented and we think she has a great future. We've got a chance to win the Black-Eyed Susan and the Preakness double, and not a lot of people have done that. We didn't discuss being on the lead. I trust Terry's judgment on it. As soon as I tell him to do something, everything could go awry leaving the starting gate. He knows this filly. He's ridden her every time at Oaklawn. And he's worked her every work at Oaklawn." 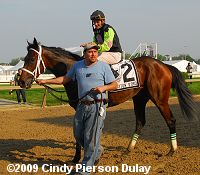 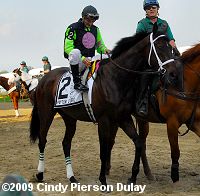 Right: Payton d'Oro circles after the race. Winning jockey Terry Thompson said, "Being down on the rail, the speed was carrying today if you could get it your way. I took her down into the first turn and no one really contested me. I was able to stay on the rail and sit until we hit the top of the stretch and then I hit the gas. She gave me what she had and ran to the wire." 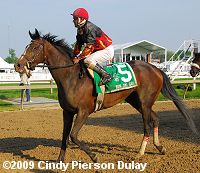 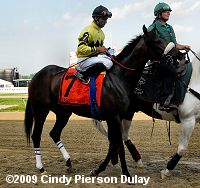 Second place finisher Bon Jovi Girl returns after the race. Her trainer Tim Ritchey said, "My horse ran very well. I'm very proud of her today. She didn't break the best and had a bit of a troubled trip." Jockey Jose Caraballo said, "She didn't get the best of starts. She stumbled out of the gate and got stepped on. She got going, but a little too late. You'll see more of her."

Right: Third place finisher and beaten favorite Casanova Move in the post parade. Her jockey Jose Lezcano said, "She ran an even race throughout. We were in position to win it, but she had no kick. I don't know why." 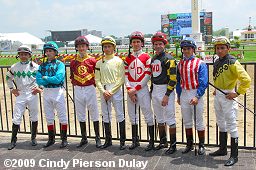 The undercard on Black-Eyed Susan Day included a new event, the inaugural Pimlico Jockey Challenge. The Challenge featured 8 top riders competing in 4 races on the undercard, with their mounts decided by lot. The riders from left to right are: Mike Smith, Mario Pino, Julien Leparoux, Garrett Gomez, Ramon Dominguez, Kent Desormeaux, Javier Castellano, Rafael Bejarano. Desormeaux won the second race of the competition and finished third in the first and last contest races to earn 22 points and win the $14,000 first prize. 14 points were awarded for a win, 6 for a second, 4 for a third and 3 for a fourth-place finish. Javier Castellano was second with 20 points netting him $10,000, followed by Garrett Gomez with 18 who earned $8,000. The other competitors and point totals were: Julien Leparoux (17), Ramon Dominguez (16), Mario Pino (9), Mike Smith (3) and Rafael Bejarano (3). The Challenge featured the top four riders in the country based upon earnings, two Hall of Famers and two Eclipse Award-winning riders. Going into the competition, the eight riders have combined to win more than 28,000 races and $1 billion in purses. 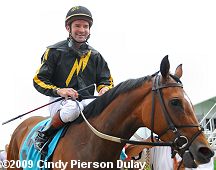 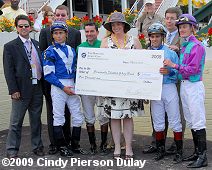 Left: Kent Desormeaux, winner of the Jockey Challenge, after winning the 5th race aboard Bette to Win. Desormeaux said, "I actually had butterflies going into the starting gate (for race 10, the final race of the contest). I've ridden in a lot of these contests around the world, but I've never won one before. It's good to be home with all my friends in Maryland."

Right: The Maryland Jockey Club presents a check for $5,000 to the Permanently Disabled Jockeys Fund with the four winners of the Jockey Challenge races: Garrett Gomez, Kent Desormeaux, Javier Castellano, and Julien Leparoux. 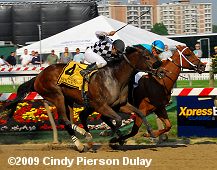 The $100,000 Adena Stallions Miss Preakness Stakes (G3) featured a compact field of 5 three-year-old fillies sprinting 6 furlongs on the main track, with the first three finishers earning a breeding season to Touch Gold, Milwaukee Brew, or Giacomo. 9-10 favorite Heart Ashley ran as expected, going to the lead under new jockey Garrett Gomez through fractions of 22.66 and 44.86, opening up a 4 length lead at the top of the stretch through a half in 44.86. 9-1 fourth choice Cinderella's Wish steadily gained on the favorite through the stretch but Heart Ashley was up to the task, holding her off by a head in the final strides to get the win in 1:10.79. It was another 4 1/4 lengths back to 20-1 longest shot Trophy Collector third.
Full results chart from DRF 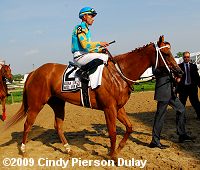 Heart Ashley heads to the winner's circle. Winning trainer Steve Asmussen said, "I think she's got a tremendous amount of talent. (Assistant trainer) Toby Sheets has had her at Belmont and has done a great job with her, but the weather has not been cooperating with us lately. The idea off the Cicada, was to freshen her up, but it wasn't to miss a few works. I think she just won on talent today."

Winning jockey Garrett Gomez said, "They were making her work early. What I wanted to do was just squeeze her leaving there so she could make the lead fine, and she did. After I made the lead, they came over on her and put pressure on her all the way up the backside. She never got a breather until the middle of the turn. In the last 1/16 of a mile, she was looking for a place to slow down. She ran a very good race, especially for going that fast." 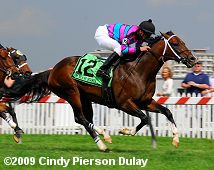 The $100,000 Jim McKay Turf Sprint featured a field of 10 older horses sprinting 5 furlongs on the turf. 2-1 second choice Mr. Nightlinger battled for the lead with 35-1 Natural Seven through fractions of 21.95 and 44.35. Natural Seven tired through the stretch to finish sixth, as 11-1 Blue Sailor put in a late rally from third. Mr. Nightlinger easily held him off in the final 1/16 to win by 1 1/2 lengths in 56.29 over the firm course. It was just a neck back to 10-1 Rouse the Cat third, who nosed out 7-2 True to Tradition in fourth. 9-5 favorite Heros Reward raced in midpack early but showed no rally late, finishing fifth.
Full results chart from DRF 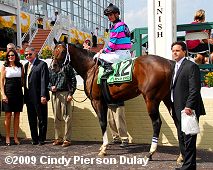 Mr. Nightlinger in the winner's circle. Winning trainer Bret Calhoun said, "In these sprint races, there's always plenty of speed. We drew favorably. We were outside where we could apply pressure instead of getting pressure applied on us. Things worked out very well." Jockey Jamie Theriot added, "Coming into the race, we knew he was a different horse. The last time we knew he needed a race. I got a chance to work him last week and he showed me he was back to himself. He doesn't mind pressure if it's there." 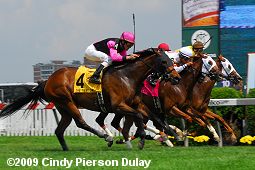 Kicking off the stakes action on Friday was the $50,000 The Very One Stakes for older fillies and mares sprinting 5 furlongs on the turf. 23-1 Sentebale set a pace of 22.22 and 44.96 while 1 1/2 lengths in front. Three horses closed on the leader in the final furlong, creating a four-horse blanket finish in 56.76. The photo determined that 6-5 favorite Smart and Fancy on the outside nosed out 6-1 Canadian Ballet for the win, who headed 7-2 Ahvee's Destiny in third. It was just a nose to pacesetter Sentebale fourth, and 3 more to the rest of the field.
Full results chart from DRF 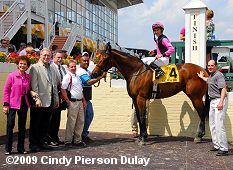 Smart and Fancy in the winner's circle. Tom Ianotti, assistant to winning trainer Anthony Dutrow said, "Ramon has ridden this horse since she was 2 years old. He knows her well. She's got heart and class. She knows where the line is and she knows how to get there. She got clear and the sixteenth-pole. She hit that last gear and found the line. Ramon is an excellent rider and did a fantastic job."  Jockey Ramon Dominguez added, "She really tries hard. The leader really dug in. I wasn't sure we got up until the very end. I really wasn't trying to time my move, but she did it." 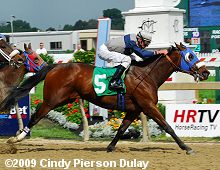 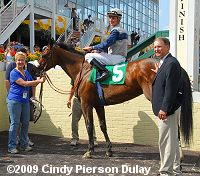 All Giving in the winner's circle. Winning trainer Flint Stites said, "She's been a joy since I first got her. In terms of longevity and durability, and in terms of making money, this mare has been my very best. When we first got her she had problems in the gate. She needed to learn to relax. This was probably her best performance." Jockey Jonathan Joyce added, "She knows exactly what she's doing. She can be anxious in the gate at times, but she was very calm today and professional. She broke sharp and I knew my mare was going to give me everything she has." 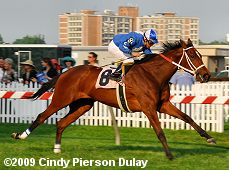 The last race on the Friday afternoon card was the $50,000 Hilltop Stakes for 3-year-old fillies going 1 1/16 miles on the turf. 12-1 Listentothewindblo was loose on the lead through fractions of 24.04, 48.00, and 1:11.99, while as many as 3 lengths in front of 3-1 Blind Date in second. At the top of the stretch, the pacesetter tired allowing Blind Date to inherit the lead. She drew off through the stretch to defeat late-running 9-10 favorite Rena by 2 3/4 lengths in 1:42.89 over the firm course. It was a length back to 8-1 Glamorous Gal third.
Full results chart from DRF 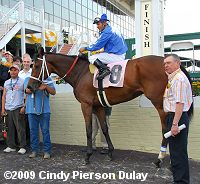 Blind Date in the winner's circle. Winning trainer Hamilton Smith said, "She's an awful nice filly. The jock said she did it real easy. After it was over, I saw it the same way. It never looks that easy during the race. If it wasn't for the Maryland Million Day race (a third-place finish), she'd be undefeated. This will help me get over that disappointment." Jockey Jeremy Rose added, "I didn't think we were going through the fractions as fast as she did. She's a very big horse. She just does things very easily. Once she had the lead and we were in the stretch, she got back on the bit when the other horse came to us. I didn't have to look back, because she told me there was someone coming."