Of the three Triple Crown races, the undercard of the Belmont Stakes has the most prestigious races on its undercard. This year, the 52,861 on hand were treated to 5 graded stakes which preceded the main event. Three were Grade 1 events, including both turf races.

Immediately before the Belmont Stakes, a field of 12 top older turf horses went to post in the $400,000 Woodford Reserve Manhattan Handicap (G1), a 1 1/4 mile trip over the inner turf course. Cowboy Cal, a close second in the Woodford Reserve Turf Classic at Churchill Downs last out, was sent off as the slight 3-1 favorite over 7-2 second choice Gio Ponti, winner of the Frank E. Kilroe Mile at Santa Anita in March. The two-horse IEAH Stables entry of Court Vision, third in the Turf Classic, and Optimizer, second in 3 straight starts in claiming company and entered as the "rabbit", were the 4-1 third choice on the board.

As expected, jockey Rudy Rodriguez sent Optimizer to the lead soon after the start, setting early fractions of 24.38 and 49.08 over the first half mile while as many as 1 1/2 lengths in front of Cowboy Cal who stalked him in second. Optimizer was used up after 5 furlongs allowing Cowboy Cal to inherit the lead through 3/4 in 1:12.70 and 1 mile in 1:37.42 over the yielding course. Entering the stretch, Cowboy Cal tired as 7-1 Cosmonaut moved up to take the lead with a furlong to go before tiring to 5th. Gio Ponti, who was last of all for the first 3/4 mile saving ground around both turns, came out 5 wide at the top of the lane and closed with a rush down the center of the course to win going away by 1 1/2 lengths over late-running 15-1 Marsh Side in a time of 2:02.91. It was another 1 1/4 lengths back to 24-1 Better Talk Now third, while favorite Cowboy Cal faded to finish ninth. 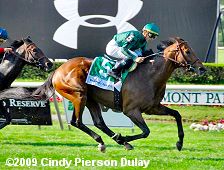 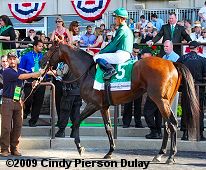 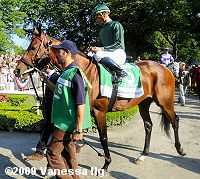 Left: Gio Ponti in the winner's circle. Winning trainer Christophe Clement said, "This was great! It was a very good race to see him come from last to first. We always thought he was a very good horse. He won a Grade 1 race on a firm turf horse going a mile, now he has won a Grade 1 race at 1 1/4 miles on good (yielding) ground. He's a good horse."

Right: Gio Ponti in the paddock before the race. Winning jockey Garrett Gomez said, "I was a little worried because I was so far back. He kind of threw his head at the start and he shot off really nice. The only thing that really had me worried was I had Better Talk Now in front of me and next to me and it seemed like I was a little further back then I needed to be. Court Vision was right in front of me, I followed Ramon (Dominguez), he kicked on just a little bit and I squeezed him just a little bit in the middle of the turn and I looked up and they were starting to stagger, so I just sat there for a second, and you know he put in a nice run, ran a really good race. He's never really run a bad race for me and he continues to just get better with age." 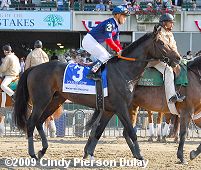 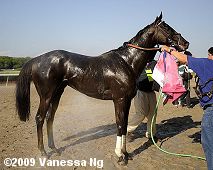 Left: Second place finisher Marsh Side in the post parade. His trainer Neil Drysdale said, "Gio Ponti had more acceleration than us, but we're still delighted by our finish. Our horse ran very well. I think he may be better at 1 1/2 miles." His jockey Javier Castellano said, "He's an honest horse and always tries hard. We had a perfect trip. There were four horses going for the lead, and they seemed to be rank. We took advantage of that and stood behind them. We had the acceleration at the end, but the other horse was good here."

Right: Third place finisher Better Talk Now gets hosed down after the race. His trainer Graham Motion said, "I am really thrilled. I wanted to see exactly where he was, and I think today he showed that he is back where he was. It was also a lot to ask Jeremy (Rose) to ride him cold turkey. He probably needs 1 1/2 miles and a quick pace in front of him, but then, that's almost always been the case. When he doesn't run his race, there is usually no pace in the race. Our goal is to run in the Sword Dancer next. We would love to win another Grade 1 with him."


The $400,000 Just a Game Stakes (G1) features top older fillies and mares going 1 mile on the Widener turf course. A field of seven went to post after I Lost My Choo scratched out, with last year's champion turf female Forever Together sent off as the 7-10 favorite, exiting wins in the Breeders' Cup Filly and Mare Turf in October and then the Jenny Wiley in April. In to challenge her included 6-1 second choice Modern Look, a close second in the Moscow Burning Stakes at Santa Anita last out, and 7-1 third choice My Princess Jess, winner of the Beaugay at Belmont on May 2.

When the gate opened, jockey Pascacio Lopez sent 14-1 longest shot Raw Silk to the front and she set early fractions of 23.85, 47.88, and 1:12.35 over the yielding turf course, while being stalked by 9-1 Captain's Lover a length behind. Entering the stretch, Raw Silk continued to lead but stopped badly inside the final furlong. 10-1 Diamondrella, who was last of all for the first 3/4 mile, came out six wide and closed with a rush to pass the whole field, taking over the lead at the 1/8 pole and drawing away to win by 1 3/4 lengths over late-running favorite Forever Together in 1:36.49. It was another 1 1/4 lengths back to My Princess Jess third. 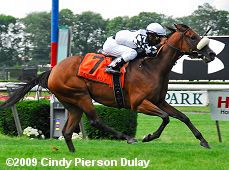 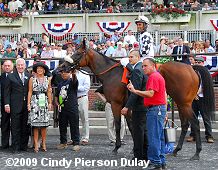 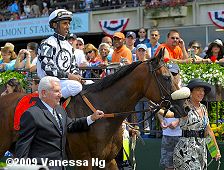 Left: Diamondrella takes her walk down Victory Lane. Winning trainer Angel Penna Jr. said, "The only thing I really panicked about was when it started raining (on Friday). Then, there was the matter of distance. But, when you have a good horse, it makes it easy, and she's a very good horse. Plus, she was getting 5 pounds from Forever Together. The other filly is a champion, a big, huge horse and 5 pounds on soft turf can make a difference. Now, after this race, I know my filly likes soft turf. As for what's next, I'll ask Rajiv what he thinks. It's great we might have more on the horizon (than sprints). The Breeders' Cup is an awfully long way away - we'll look at whatever is next, and take it from there."

Right: Diamondrella in the winner's circle. Winning jockey Rajiv Maragh said, "The gates opened and she broke sharp. I didn't want her to run up early, so I kind of took hold of her right away. The pace slowed down more than I was hoping it would, but she was comfortable being in the back of the pack because there was nobody really chasing behind her, so she got real comfortable and got happy. And, she's an awesome filly, so once she does that she's going to finish all the time. She's honest, she's always consistent, so I knew I was going to get a good run from her and it was good enough!" 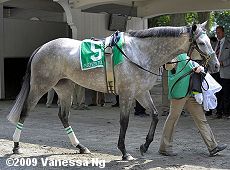 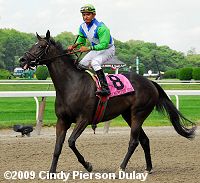 Left: Second place finisher and beaten favorite Forever Together in the paddock. Her trainer Jonathan Sheppard said, "Diamondrella kind of got the first run on us. It took my horse a little while to get running room. Considering she was giving weight and running not under ideal conditions for her, she was by no means disgraced. I was quite worried about the soft turf. There are all sorts of variations of soft, yielding, and so on. But, she'd been training for this and I thought let the chips fall where they may." Her jockey Julien Leparoux said, "I didn't think I had that tough a trip. The only thing I can say is that the winner got the jump on us in the stretch. My filly ran good and finished good, but the race might have been a little shorter for her than we would have liked. And if the ground was a little more firm, it would have helped us more as well."

Right: Third place finisher My Princess Jess returns after the race. The 7-1 third choice settled in midpack fifth under jockey Cornelio Velasquez, came out 5 wide into the lane and rallied well to get third beaten 3 lengths. The Barclay Tagg trainee improved her record to 5 wins, 3 seconds, and 2 thirds in 12 starts, earning $465,515 for owner Lael Stable (Roy and Gretchen Jackson).