The feature race at Belmont Park on the Friday before Belmont Stakes Day is the $200,000 Brooklyn Handicap (G2), a complete 1 1/2 mile circuit of the sloppy main track for older horses, an very early prep for the Breeders' Cup Marathon at Santa Anita. Just 3,563 were on hand on a rainy, cool afternoon, and they sent Three Coins Up Stakes runner-up Rising Moon off as the 8-5 favorite in the seven-horse field. Delosvientos, winner of the Gallant Fox, was the 4-1 second choice over 9-2 Ea, second in the William Donald Schaefer at Pimlico last out.

6-1 Nite Light contested the early lead with 21-1 longest shot Fierce Wind and favorite Rising Moon through the first 6 furlongs in 24.74, 49.02, and 1:13.81. Entering the stretch, Fierce Wind dropped back and was eased through the stretch by jockey Kent Desormeaux, as Nite Light continued to lead through a mile in 1:39.57 and 1 1/4 miles in 2:04.61. 17-1 shot Eldaafer, sixth early, swung out wide into the stretch and closed with a rush to nail the pacesetter at the line by a nose in 2:31.58. It was another 2 1/2 lengths back to Rising Moon third. Fierce Wind and Delosvientos did not take to the muddy track and were both eased. 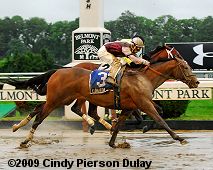 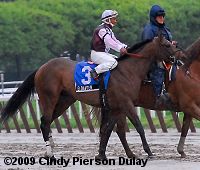 Left: Eldaafer in the winner's circle. Winning trainer Diane Alvarado, celebrating her first stakes win said, "We took the blinkers off. He likes to stalk. He has to have things his way. (Jockey) Jorge Chavez rode a good race - we all rode him to the wire. His owner (Richard DeMarco of Alghuwayriyah Stable) was very confident and even said he was going to kiss any horse who finished in front of him - I was confident, but I wasn't going to kiss any horse."

Left: Eldaafer behind the gate before the start. 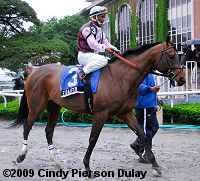 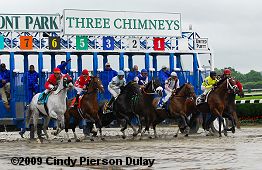 Left: Eldaafer heads out of the paddock before the race. Winning jockey Jorge Chavez said, "I had a beautiful trip. My horse is still learning and he got a little scared on the rail on the first turn. But after that he was okay. I tried to put him in gear just a little, but he didn't respond. So, in the stretch, I took him to the outside and he responded when I asked him and I guess I made it right in time to the wire!"

Right: The horses break from the gate for the Brooklyn Handicap. 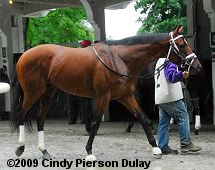 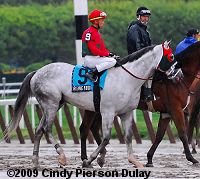 Left: Second place finisher Nite Light in the paddock before the race. The 6-1 fourth choice contested the pace for the first 7/8 mile under jockey John Velazquez, led into the stretch but was caught in the final strides. The Todd Pletcher trainee improved his record to 5 wins, 5 seconds, and 0 thirds in 12 starts, earning $312,520 for owner Edward P. Evans.

Right: Third place finisher and beaten favorite Rising Moon behind the gate before the start. The 8-5 favorite stalked the pace in second the whole way under jockey Garrett Gomez, fought gamely to mid-stretch but faded late to finish third beaten 2 1/2 lengths. The Richard Dutrow Jr. trainee improved his record to 4 wins, 1 second, and 2 thirds in 10 starts, earning $221,938 for owner Four Roses Thoroughbreds.


With rains falling throughout the day, the $100,000 Hill Prince Stakes was taken off the turf and contested at the distance of 1 mile around one turn of the sloppy main track, immediately downgrading the race from Grade 3 to listed. With 4 scratches, just 6 three-year-olds went to post with Lexington Stakes runner-up Conservative sent off as the 7-5 favorite over 2-1 Affirmatif, winner of the Woodlawn at Pimlico. 9-2 Dubinsky, winner of an allowance last time out and entered as "main track only", completed the top 3 on the toteboard.

Affirmatif battled for the lead with 8-1 Despite the Odds down the backstretch through fractions of 23.47, 46.25, and 1:10.13, with Dubinsky sitting third another 2 lengths behind. Entering the stretch, jockey Jeremy Rose asked Despite the Odds, who quickly drew away on the field, cruising under the line 7 1/2 lengths ahead of Affirmatif in a time of 1:35.68. It was a long 6 1/4 lengths back to Dubinsky third, while favorite Conservative was fourth. 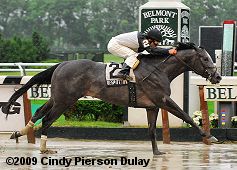 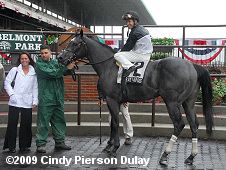 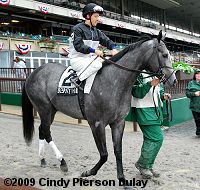 Left: Despite the Odds in the winner's circle.

Right: Despite the Odds heads out for the post parade. Winning jockey Jeremy Rose said, "I always thought he was a distance horse. He wasn't himself in his last race and I thought he showed his credentials today. Coming off the turn I had a ton of horse, if they were going to run him down it would have to be a horse with a lot of kick. Even though he never ran in the slop before, I was happy with the way he was getting over it, even in the post parade. I couldn't believe we went that fast. It was all about where he was comfortable today - it never seemed like he wanted to be on the lead any more than I did, and I had plenty of horse to finish up with." 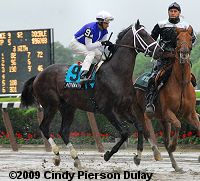 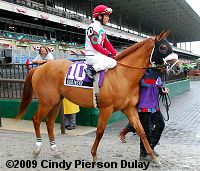 Left: Second place finisher Affirmatif in the post parade. The 2-1 second choice forced the pace outside the eventual winner the whole way under jockey John Velazquez until the stretch when he faded to finish second beaten 7 1/2 lengths. The Todd Pletcher trainee improved his record to 2 wins, 2 seconds, and 0 thirds in 4 starts, earning $83,600 for owner-breeder Wertheimer et Frere.

Right: Third place finisher Dubinsky heads out for the post parade. The 9-2 third choice stalked the leaders to the outside the whole way and could not improve position late, finishing third beaten 13 3/4 lengths. The Richard Dutrow Jr. trainee improved his record to 2 wins, 2 seconds, and 1 third in 8 starts, earning $82,450 for owners Paul Pompa Jr. and Four Clover Stable. 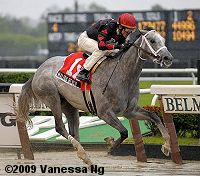 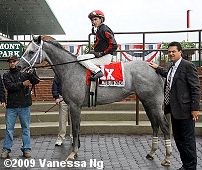 The first stakes race on Friday was the $65,000 Alyssum Stakes for 3-year-old fillies at 6 1/2 furlongs on the main track, with just 4 remaining in the race after three scratches. 2-1 second choice Malibu Beach led from gate to wire, holding off the late charging 4-5 favorite Reforestation in deep stretch to get the win in 1:17.12 over the sloppy going. It was a long 6 lengths back to 9-2 third choice Pretty Katherine, and 3 more to 5-1 Speculation last.
Results Chart 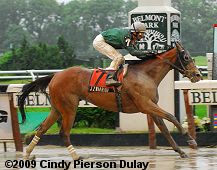 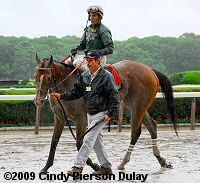