The $600,000 Shadwell Metropolitan Handicap (G1), popularly referred to as the "Met Mile", is the traditional Memorial Day feature at Belmont Park, featuring top older horses and some 3-year-olds going 1 mile around 1 turn of the main track. After Mr. Fantasy scratched out, a field of 12 went to post on a sunny holiday afternoon before just 10,099 paying spectators, with Bribon sent off as the 3-1 favorite, exiting a win in the Westchester Handicap after a fourth place effort in the Gulfstream Park Handicap. In to challenge the French-bred included 7-2 second choice Smooth Air, winner of the Gulfstream Park Handicap last out after finishing second in the Tallahassee, and 6-1 third choice Mr. Sidney, winner of the Maker's Mark Mile on the turf at Keeneland.

12-1 Driven by Success was sent to the front by jockey Ramon Dominguez and he set a quick pace of 22.70, 45.20, and 1:08.55 while as many as 1 1/2 lengths in front of 19-1 Accredit who stalked him down the backstretch. Turning for home, Driven by Success continued to lead, as Smooth Air, fifth early, moved up alongside to challenge. With a furlong remaining, Smooth Air passed the pacesetter to take over the lead at the 1/16 pole, but Bribon, who was 7th early, came out five wide into the stretch and closed with a rush to nail Smooth Air late for the 1/2 length win in 1:34.15 over the fast track. It was a length back to Driven by Success, who held off late-running 8-1 My Pal Charlie by a nose. 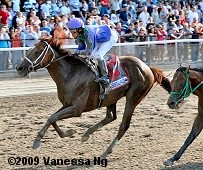 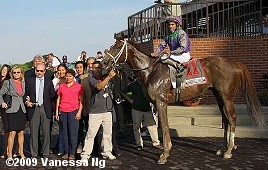 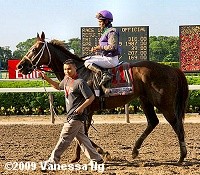 Left: Bribon in the winner's circle.

Right: Bribon circles after the race. Winning trainer Robert Ribaudo said, "There was no reason not to run him. The horse was doing good, this was the logical spot to run him and it's a credit to the horse. Everybody likes to save ground and come through, but this horse has run all his races circling (the field). You know it might not be the best way, or the shortest way home, but he's very comfortable doing that and it worked out great today. A mile is a great distance for him, but it's a great time to give him a break now. There are no mile races left - nothing of any consequence. Maybe we'll come back in Saratoga at 7/8. He's as strong now (as he ever was) and maybe a little better. He's got no choice (as a 6-year-old gelding), he's going to be around for awhile." 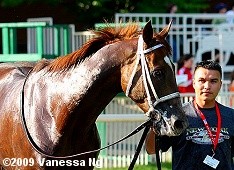 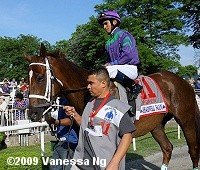 Left: Bribon returns to the barn after winning the Met Mile.

Right: Bribon heads out of the paddock before the race. Winning jockey Alan Garcia said, "I had a good trip all the way around. I didn't want to be too far back. At the 1/4 pole, my horse put his head down and ran. I'm happy to win my second Met Mile in a row!" Garcia won last year's renewal aboard Divine Park. 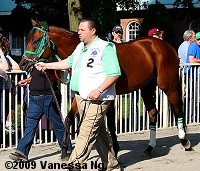 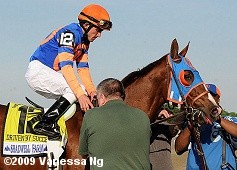 Left: Second place finisher Smooth Air in the paddock before the race. His jockey Paco Lopez said, "He was positioned good, ran good. Second best." The 7-2 second choice raced back in fifth early, split horses on the turn, gained the lead with 1/2 a furlong remaining but could not hold off the winner late. The Bennie Stutts trainee improved his record to 6 wins, 4 seconds, and 3 thirds in 15 starts, earning $1,052,200 for owner-breeder Mount Joy Stables.

Right: Third place finisher Driven by Success after the race. The 12-1 shot sprinted clear on the rail exiting the chute, set a fast uncontested pace under jockey Ramon Dominguez, and maintained his lead for the first 7 furlongs before tiring in the final furlong to finish third beaten 1 1/2 lengths. The Bruce Levine trainee improved his record to 3 wins, 2 seconds, and 3 thirds in 9 starts, earning $213,121 for owner Repole Stable. 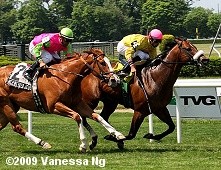 Earlier in the afternoon, a field of seven older New York-breds went in the $65,000 Dedicated Rullah Stakes, a 6 furlong sprint on the inner turf course. 9-2 fourth choice Redefined was loose on the lead down the backstretch through fractions of 22.57 and 45.56 while as many as 2 1/2 lengths ahead of 5-1 Meriwether Jessica in second. Redefined continued to lead to mid-stretch through 5/8 in 56.65, with Meriwether Jessica closing to his outside. Redefined held off Meriwether Jessica in the final strides to win by a neck in 1:07.85 over the firm course. It was a long 2 1/4 lengths back to late-running 5-2 favorite Mor Chances third. 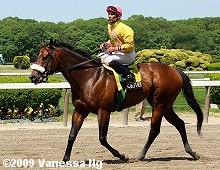 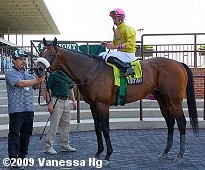 Left: Redefined in the winner's circle.

Right: Redefined returns after the race.