Belmont Park hosted three graded stakes over the fast main track on Independence Day, on a sunny Saturday afternoon with temperatures in the high 70's before 7,667 paying spectators. The highlight of the card was the $400,000 Suburban Handicap (G2) for older horses going 1 1/4 miles. Asiatic Boy, exiting a runner-up finish in the Stephen Foster Handicap last time out at Churchill Downs, was sent off as the 8-5 favorite in the field of 10. In to challenge him included 5-2 second choice It's a Bird, winner of both the Oaklawn Handicap and the Lone Star Park Handicap, an 6-1 third choice Cool Coal Man, winner of the Lord of the Night Stakes at Belmont in his last start.

33-1 Finallymadeit was rushed to the front by jockey Eduardo Nunez and he set a pace of 24.48, 47.63, 1:11.39, and 1:35.73 saving ground on both turns while as many as 3 lengths in front of the rest of the field led by It's a Bird and Cool Coal Man. Jockey Alan Garcia kept favorite Asiatic Boy in midpack fourth the whole way. Entering the stretch, Finallymadeit continued to lead but the fast pace had taken its toll as he grudgingly yielded late. 11-1 Dry Martini, who was outrun early and settled at the back of the field for 3/4 mile, came through on the inside on the turn and closed well to take over the lead inside the 1/8 pole. Asiatic Boy passed tiring horses to get second at the top of the stretch but was no match for the winner, as Dry Martini cruised under the line 2 lengths in front in 2:00.80. It was just a neck back from Asiatic Boy to 7-1 Rising Moon third, and another neck to pacesetter Finallymadeit fourth. 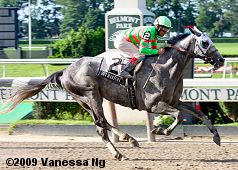 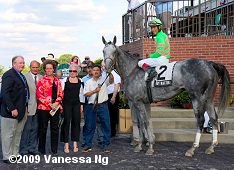 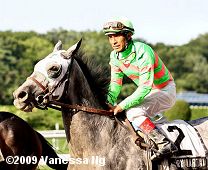 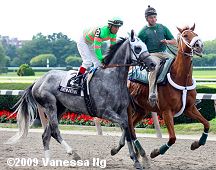 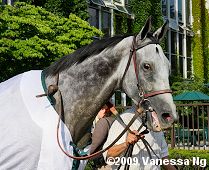 Left: Dry Martini in the post parade. His jockey Edgar Prado said, "Well, it worked out the way we planned it. Just break, take a little hold and wait, save as much ground as possible and hopefully pick up the pieces and come with a run. He ran a super race last time, he was right there every step of the way and today he did the same thing. I was very comfortable and he was doing everything so easy. Just a little traffic at the top of the stretch, but once he found his room he just leveled off and found another gear. I was very proud of him."

Right: Dry Martini looks a bit wild-eyed as he heads back to the barns after the race. 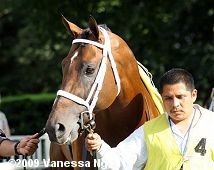 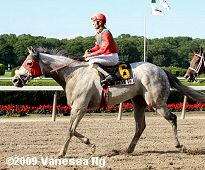 Left: Second place finisher and beaten favorite Asiatic Boy in the paddock before the race. His trainer Kiaran McLaughlin said, "I didn't like it, we finished second. He ran well - we'll have more time going into the Whitney, 5 weeks, and he's a very nice horse, ran well. And the winner ran well. Congratulations to Barclay Tagg and his team and we'll go from here."

Right: Third place finisher Rising Moon returns after the race. The 7-1 fourth choice raced in 8th down on the rail under new jockey Jose Lezcano, came out 5 wide into the stretch and closed with a rush to get third beaten 2 lengths. The Richard Dutrow trainee improved his record to 4 wins, 1 second, and 3 thirds in 11 starts, earning $261,938 for owner Four Roses Thoroughbreds.


The $300,000 Prioress Stakes (G1) featured a field of nine 3-year-old fillies (8 betting interests) sprinting 6 furlongs on the main track. The Edward P. Evans entry of Cat Moves and Light Green were sent off as the 11-10 favorite. Cat Moves came into the race undefeated in 2 lifetime starts and was making her stakes debut, while entrymate Light Green exits an 8 length romp in the Fall Aspen Stakes. In to challenge the pair included 5-2 second choice Gabby's Golden Gal, exiting a win in the Acorn, and 7-1 third choice Heart Ashley off a 3-race winning streak including the Cicada at Aqueduct and the Miss Preakness at Pimlico.

Heart Ashley and Light Green battled for the lead down the backstretch through quick fractions of 21.56 and 44.01 while as many as 3 1/2 lengths in front of the rest of the field. Entering the stretch, Light Green pulled away from Heart Ashley, opening up a clear lead with a furlong to go through 5/8 in 55.99. However, entrymate Cat Moves, who lunged in the air at the start and raced back in 5th early, came out 4 wide into the stretch and outfinished Light Green in the final 1/16 to win by 3/4 length in 1:08.65. It was another 2 1/4 lengths back to 48-1 longest shot Reforestation third. 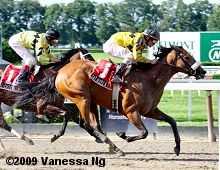 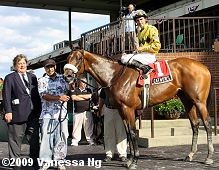 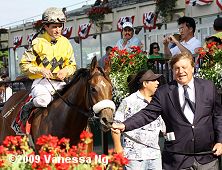 Left: Cat Moves in the winner's circle with owner and breeder Edward P. Evans on the left.

Right: Happy owner Edward P. Evans leads Cat Moves down Victory Lane. Evans, who also owns and bred the runner-up Light Green, said, "We were high on both fillies, probably higher on the second finisher because she had more of a record. Man, they both ran fantastic!" 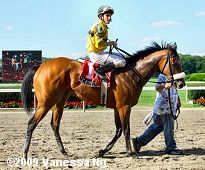 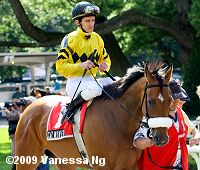 Right: Cat Moves in the paddock before the race. Her trainer Anthony Dutrow said, "I came over here today thinking she was live. I was so confident this filly was going to run a great race. I was OK all during the race. I didn't know if we were going to win it, but I knew it was going to be an exciting stretch. This filly is so relaxed. After she won her first race, she acted like she had done this 100 times. (In the winner's circle,) while everyone was gathering around to take a picture, she just stood there. She never moved a muscle and she'd still be standing there. It was a big effort for her today. We'll consider the Test Stakes but we will have to see how she comes out of this race and of course discuss it with Mr. (Edward) Evans." 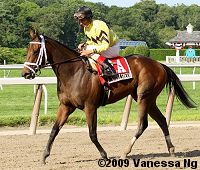 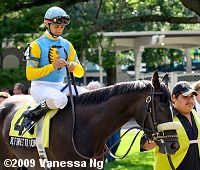 Left: Second place finisher Light Green returns after the race. Her trainer Todd Pletcher said, "She ran great. Fought through extremely fast fractions, dug in, tried hard. I was a little surprised someone was eager enough to go with her (in the beginning), but it was a good effort." Her jockey John Velazquez added, "Good trip, a little too fast for her. She ran great though, ran really good."

Right: Third place finisher Reforestation in the paddock before the race. The 48-1 longest shot raced in fourth along the rail early under new jockey Eibar Coa, saved ground on the turn and split tiring horses late to gain third place. The Billy Turner trainee improved her record to 2 wins, 5 seconds, and 1 third in 7 starts, earning $137,600 for owner Thor-Bred Stable LLC.


Kicking off the stakes action on the Fourth of July card was the $200,000 Dwyer Stakes (G2) for three-year-olds going 1 1/16 miles around one turn of the main track. Warrior's Reward, a close second in the Northern Dancer Stakes at Churchill Downs last out, was sent off as the 4-5 favorite in the field of 7 over 5-1 second choice Just Ben, an allowance winner last out and making his stakes debut. 6-1 Kensei, who was second in the Derby Trial and then third in the Woody Stephens last out, completed the top three on the toteboard.

Warrior's Reward stumbled badly at the start and was at least 10 lengths off the pace down the backstretch as Just Ben led the field through fractions of 23.23, 45.71, and 1:09.30 while being pressed by 8-1 American Dance the whole way. Turning for home, 7-1 Kensei, who drafted in behind the leaders in third most of the way, came out for room to pass the tiring pacesetters and took over the lead at the 3/16 pole. 8-1 Convocation put in a strong rally of his own but was no match for Kensei, who cruised under the line 3 1/4 lengths in front in 1:40.47. It was another 2 1/4 lengths back to late-running favorite Warrior's Reward third. 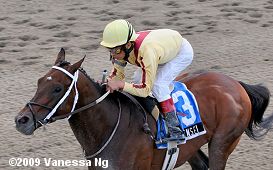 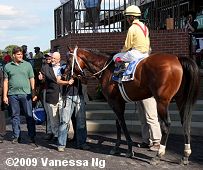 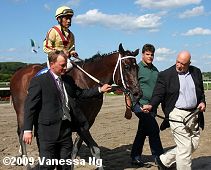 Left: Kensei in the winner's circle with owner Jess Jackson of Stonestreet Stables giving the thumbs up. Jackson said, "He was within himself, which I liked. Saratoga is on our screen, but we have to look at other alternatives, as well. We have hard decisions but first we have to see how he comes out of the race. Curlin spoiled me; now (Rachel Alexandra and Kensei) are spoiling me. I'm very delighted Kensei came along as he did. It's all a question of hope, and who emerges is anyone's guess."

Right: Kensei is led to the winner's circle by assistant trainer Scott Blasi and owner Jess Jackson. Blasi said, "You can tell by his progression, in his numbers and in our confidence in him, that he's headed in the right direction. The key was getting him to learn to relax a little bit and Edgar said he was just perfect today and when he called on him, he ran and that sort of helps them get long distances." Jockey Edgar Prado added, "Every step of the way, I was feeling very comfortable. It felt good. It was a matter of time, and when I turned him loose, he responded. It's very nice to ride this kind." 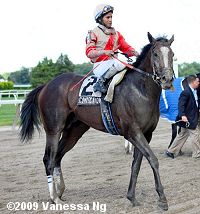 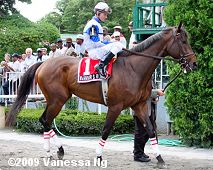 Left: Second place finisher Convocation returns after the race. His trainer Jimmy Jerkens said, "He was a little further back that I thought he'd be. It was a fast racetrack, but not lightning-fast. We'll go to Saratoga and figure things out from there." His jockey Alan Garcia added, "He ran a good race. It took him a while to get going (but) he finished well. I think the track was favoring speed."

Right: Third place finisher and beaten favorite Warrior's Reward heads out of the paddock before the race. His jockey Calvin Borel said, "He broke badly and I couldn't get him going. He was fine, the ground just broke out under him, it was bad luck. We'll get them next time." His trainer Ian Wilkes said, "The break really cost us our position. We didn't need to be that far back here. It's tough to close from a long way back on this track. Calvin said he was standing good, the ground just broke out underneath him. He's a big horse, you know. That's why they call it Big Sandy here, it's not easy. He finished strong and we'll move forward from here. If he's fine we'll keep on going to the Jim Dandy. We'll make sure he's okay, make sure he didn't hurt himself or anything."