The 37,090 fans who came out to Monmouth Park on Sunday for the Haskell Invitational enjoyed 7 stakes races on the undercard. Heavy rains earlier in the day rendered the track sloppy, and after a 4 horse spill on the turf course in the 4th race, the rest of the turf races were moved to the main track for safety reasons. Since two of the turf races were Grade 3 events, because of the switch in surface they were automatically downgraded to ungraded. 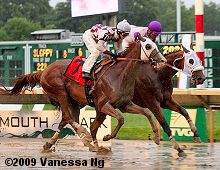 Kicking off the stakes action on Haskell day was the $100,000 Majestic Light Stakes for older horses going 1 1/16 miles on the main track. 5-1 Actin Good battled for the lead with 23-1 longest shot Pampered Sir through fractions of 23.52, 47.31, and 1:11.87. Entering the stretch, Pampered Sir tired but 4-1 second choice Acting Zippy was closing well from sixth early. Actin Good prevailed by a nose over Acting Zippy in 1:43.76. It was 2 1/4 lengths back to 9-2 third choice Famous Patriot, while 3-2 favorite Chirac was fourth. 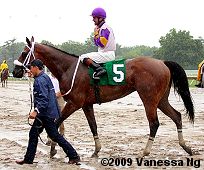 Actin Good heads for the winner's circle. His trainer Bobby Dibona said, "We've been pointing to this race all along," Dibona said. "I knew he'd need a couple of starts to get to a peak, and he was really tenacious out there today. The Iselin (Aug. 22) is a possibility for him." Jockey Kent Desormeaux added, "He had a lot of run turning for home and when the other horse (Acting Zippy) stuck with us, he dug in gamely." 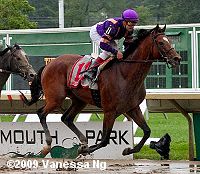 The $100,000 Jersey Derby was originally scheduled for turf but was contested on the main track at 1 1/16 miles. After 7 scratched out, only 4 made the gate. 8-1 longest shot Algeiba dueled out front with 7-1 third choice Code of Honour through a half in 47.17, before 2-5 favorite Despite the Odds off over the lead on the far turn. However, 5-2 second choice Endymion came wide into the stretch and easily passed the favorite at the 3/16 pole, drawing clear to win by 1 3/4 lengths in 1:44.22. It was a long 10 1/4 lengths back to Code of Honour third. 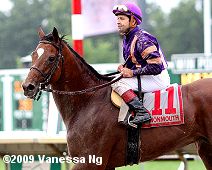 Endymion returns after the race. His jockey Joe Bravo said, "My horse ran a real big one today, and dug in all the way to the end. He didn't want to let that horse go by." 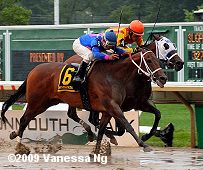 After 5 scratches, just three older fillies and mares sprinted 6 furlongs in the $100,000 Regret Stakes. 7-10 favorite Sunday Geisha dueled with 2-1 Fearless Leader through fractions of 22.17 and 44.75, before 5-2 longest shot D'wild Ride, who settled 3 lengths off the leaders early, came out wide into the stretch and got up by a head over Fearless Leader in 1:09.52. It was 1 3/4 lengths back to favorite Sunday Geisha last. 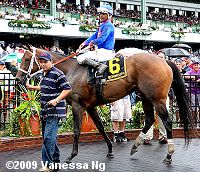 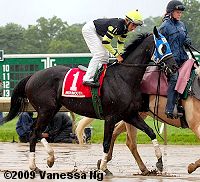 D'wild Ride in the winner's circle. Her jockey Carlos Marquez Jr. said, "This filly really showed her class today. I wasn't sure if she was going to go by that horse, but she kicked it in for me as we got down towards the wire." 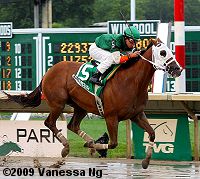 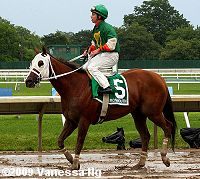 Fleet Valid returns after the race. His trainer Scott Volk said, "He's just a plain, good horse. He was a good horse when he was young, he hit the bottom, and now he's come back. He was a terrific claim." 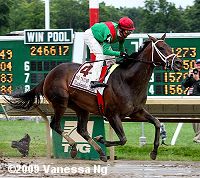 The $200,000 Taylor Made Matchmaker Stakes for older fillies and mares was originally carded for turf but was run at 1 1/8 miles on the main track. 3-1 third choice Meadow Saffron battled for the lead with 5-2 second choice American Border through fractions of 23.64 and 48.16. Meadow Saffron tired after 5/8, allowing American Border to lead the field into the stretch through 3/4 in 1:12.16. 2-1 favorite Captain's Lover, who stalked the pacesetters in 3rd early, easily passed American Border at the 3/16 pole and drew away late to win by 7 lengths over late-running Princess Haya. It was another 1 1/4 lengths back to American Border third. 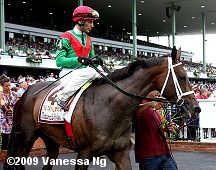 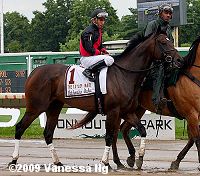 Left: Captain's Lover in the winner's circle. Her trainer Todd Pletcher said, "Any time you have a horse that has never run on the main track before, you're a little nervous. She's trained so good over it in the morning that we knew if the opportunity arose where she could race on it, we would do it. That opportunity came today, and she ran very well." Jockey John Velazquez added, "She didn't break that well for me today and she didn't get comfortable in her stride until the backstretch. I know she's a nice horse, but we didn't know if she'd be able to handle the slop. Once she got comfortable and started striding smoothly, she just ran her race." 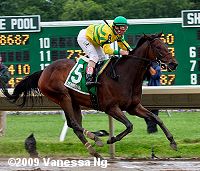 The $100,000 Lady's Secret Stakes featured a field of 9 older fillies and mares going 1 1/16 miles on the main track. 5-1 third choice Devil House was quickest out of the gate and set fractions of 23.86, 47.56, and 1:11.74 while being stalked by 8-1 Ask the Moon to her outside. Entering the stretch, Devil House accelerated away from the competition, opening up a 4 length advantage in mid-stretch and cruising under the line 3 lengths in front of late-running 10-1 Talkin About Love in 1:43.47. It was another length back to 8-5 favorite Jasmine Gardens third. 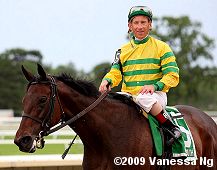 Devil House returns after the race. Her jockey C.C Lopez said, "We got a great trip and I was confident the whole way with her. She has good natural speed and can carry it a long way. Today she carried it all the way and ran great." 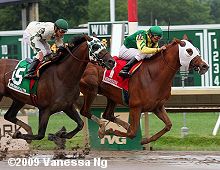 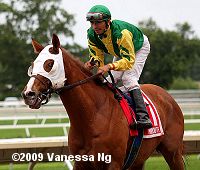 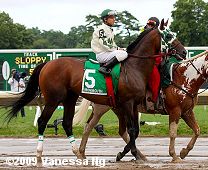 Left: Get Serious returns after the race. His trainer John Forbes said, "I think he tolerates it (the slop) more than anything. I thought it was a great ride. He (Pablo Fragoso) did a great job of slowing him down." Jockey Pablo Fragoso added, "This horse really runs hard every time he races, and he loves to win. He broke well, and I was able to get him to relax down the backside. Once that horse got up to our side, he kicked into another gear and would not let him go by."

On to the 2009 Haskell results and photos