The highlight of the New Jersey racing season is the $1 million Haskell Invitational (G1) for 3-year-olds going 1 1/8 miles over the Monmouth Park main track. The crowd of 45,132 enjoyed clear skies and temperatures in the 80's for the marathon 14-race card which included 8 stakes races. In the main event, a field of seven were entered but the eyes of the racing world were on Big Brown, who had entered the Belmont Stakes undefeated and looking for a Triple Crown sweep, but was eased in the stretch in that race finishing last of nine. The Oceanport crowd sent him off as the heavy 1-5 favorite in his first start back since the Belmont loss, over 6-1 second choice Cool Coal Man, exiting a win in the Spend A Buck at Monmouth after finishing 15th in the Kentucky Derby, and 8-1 third choice Atoned, second in his last two starts, the Spend A Buck and the Long Branch, both at Monmouth.

When the gate opened, jockey Joe Bravo sent 20-1 Coal Play to the rail and to the lead, setting a pace of 23.05, 46.59, and 1:10.85 while Big Brown and regular rider Kent Desormeaux sat about 1 1/2 lengths off the pace and to the outside down the backstretch. Turning for home, Bravo asked Coal Play to open up and he did, pulling 2 lengths ahead of the IEAH colorbearer with a furlong remaining, getting the mile in 1:35.20. Desormeaux went to the whip and Big Brown responded, finally getting into gear and passing the pacesetter at the 1/16 pole to win going away by 1 3/4 lengths in 1:48.31 over the fast main track. It was a long 4 1/4 lengths back to late-running Cool Coal Man third. 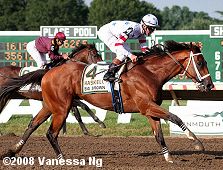 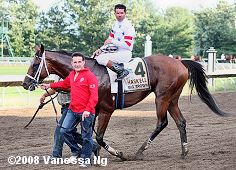 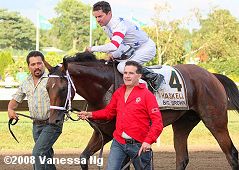 Big Brown circles after the race. Winning jockey Kent Desormeaux said, "He found a new gear and just kept sticking his neck out. I knew he was going to get there. At the top of the stretch that horse (Coal Play) took off, but Big Brown took off after him. He just kept coming, and I knew we'd get him. He made a lead change and showed another gear. He's back. Big Brown is the best horse I've ever ridden. Today he showed he's a warrior. He's always won his other races with such ease. Today he showed what courage he had. Grade 1's, they don't give them away, and Big Brown earned it today." 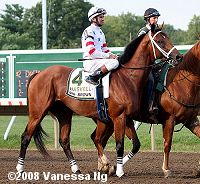 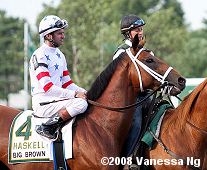 Big Brown in the post parade. Winning trainer Richard Dutrow Jr. said, "He showed up today. That other horse ran a huge, huge race. The last eighth, (Big Brown) got himself together and showed us what he's made of. I feel much better than the last time he ran, I’ll tell you that. I’m as happy as I can be with him. It was his first race after pulling up in a race, so how can I not be as thrilled as I am? He could have pulled up again. He showed that he’s a true racehorse; he got done what he had to do. I’m very proud of him." Asked if he would start next in the Travers, Dutrow said, "I wouldn’t do it, because it looked like he put in one hell of a race today. To run him back so quickly, it might not be in his best interests." 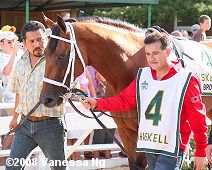 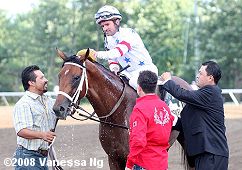 Left: Big Brown in the paddock before the race. Michael Iavarone of ownership group IEAH Stable said, "I thought we were in trouble at the 1/4 pole. Nick Zito's horse ran so big. He kicked away from us and I thought we were in trouble. This was another dimension for Big Brown, he showed his heart and courage. That was a lot tougher than anybody could imagine. Let's see what this race took out of him (before deciding what's next). He had to get down on his belly today."

Right: Kent Desormeaux sponges off Big Brown's head after the race to cool him down. 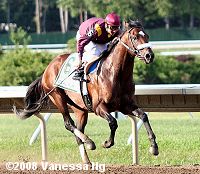 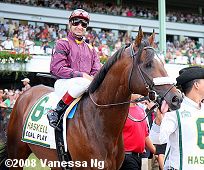 Left: Second place finisher Coal Play still on the lead in the stretch. His trainer Nick Zito said, "I thought we had a hell of a shot turning for home. I thought to myself 'We could do this again.' I'm very happy right now. We made (Big Brown) run, that's for sure. But this is good for racing. Coal Play ran a big race."

Right: Jockey Joe Bravo looks pretty happy on Coal Play as they head out for the post parade before the race. Bravo said, "It just sucks, it’s a heartbreaker. You do everything completely right and you got to have the best horse come and beat you." 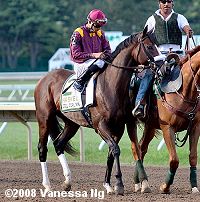 Third place finisher Cool Coal Man in the post parade. The 6-1 second choice broke inward then settled back in 6th under jockey Eddie Castro, then advanced between tiring horses on the far turn but was unable to sustain his drive, finishing third beaten 6 lengths. The Nick Zito trainee improved his record to 5 wins, 1 second, and 1 third in 11 starts, earning $449531 for owner Robert V. LaPenta, who also owns runner-up Coal Play. 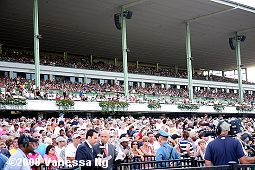 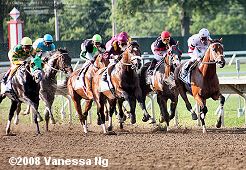 Left: The huge crowd waits for the start of the Haskell.

Right: Shortly after the start with Big Brown on the inside and Coal Play in the center. 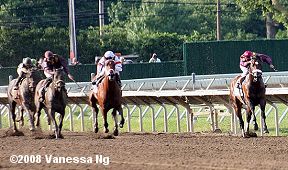 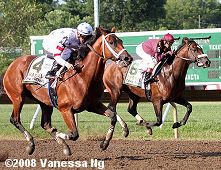 Left: Near the head of the stretch with Coal Play leading on the inside and Big Brown struggling in second way to his outside.

Right: In deep stretch with Big Brown getting the lead on the outside over Coal Play.

On the the Haskell undercard results and photos