Haskell Invitational Day is the biggest day of racing in New Jersey, and this year was no exception with 45,132 fans packing sunny Monmouth Park in Oceanport on Sunday for the 14-race card including 8 stakes events. 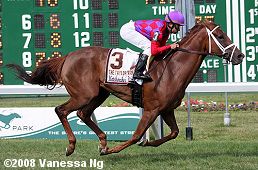 The first graded stakes race on the card was the $150,000 Taylor Made Matchmaker Stakes (G3) for older fillies and mares going 1 1/8 miles on the turf. 8-1 Eclisse was loose on the lead through fractions of 47.71 and 1:11.54 while being stalked by 2-1 favorite Paris Winds. Paris Winds put her head out in front in mid stretch, but the fast pace set the race up for closers, as 5-1 J'ray, well back early, came 5 wide into the lane and closed down the center of the course to win going away by 1 3/4 lengths over 7-1 Dyna's Lassie in 1:46.39 over the firm course. It was just a neck back to late closing 45-1 Cozzi Capital third, with Paris Winds finishing fourth.
Results Chart from DRF 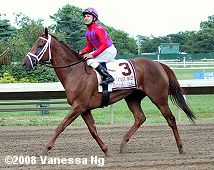 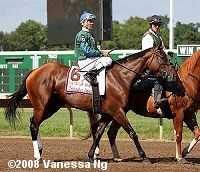 Left: J'ray returns after the race. Winning jockey Joe Bravo said, "This filly ran awesome today. Any time you team up with Pletcher, you know you have a big shot. At the 3/8 pole I started to ask her, and she picked it up unbelievably. She ran by those horses like they were fence posts." 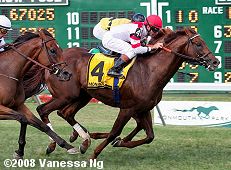 The $150,000 Oceanport Stakes (G3) featured older horses going 1 1/16 miles on the turf. 8-1 Giant Wrecker set the pace of 24.11, 47.68, and 1:10.71 while being stalked by 39-1 Baron Von Tap and 10-1 Hotstufanthensome down the backstretch. Entering the straight, Baron Von Tap tired and faded to last, but 9-5 favorite Silver Tree, sixth early, found room between horses at the top of the lane and closed well to nail the pacesetter at the line by a head in 1:40.05 over firm turf. It was just a head back to Hotstufanthensome to complete a blanket finish.
Results Chart from DRF 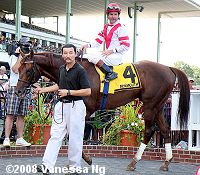 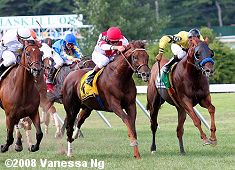 Left: Silver Tree in the winner's circle. Winning jockey Kent Desormeaux, who rode Big Brown to victory in the Haskell in the very next race, said, "This is my favorite horse in the barn. He really is a pleasure to ride. This horse loves his job and always gives his best in every race." 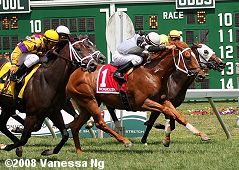 Kicking off the stakes action on Haskell day was the $100,000 Jersey Derby for 3-year-olds going 1 1/16 miles on the turf. 20-1 Primal Impact battled for the lead with 11-10 favorite Meal Penalty through fractions of 25.33, 49.43, and 1:12.89, but the pace duel ended both their chances. 6-1 Mr. Maccool, who was fourth early, split horses at the 1/8 pole to get the win in a four-horse photo finish. It was a head back to 4-1 Atwell second, then a neck to 33-1 Roman Tiger third, and another neck to Meal Penalty fourth. Only 3 lengths separated the winner and last place in the 7 horse field.
Results Chart from DRF 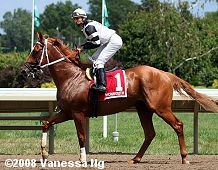 Mr. Maccool returns after the race. Winning trainer David Fawkes said, "Eddie (Castro) rode the horse just perfect. The instructions were to sit just behind the speed and wait and wait. This horse and Eddie did everything right." 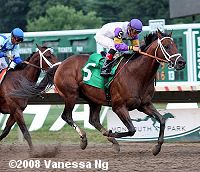 The $100,000 Charles Hess III Handicap is a 1 mile 70 yard main track event for New Jersey-bred older horses. 9-1 Bythebeautifulsea and 17-1 Hermosillo contested the early pace before Hermosillo faded after a half in 46.88 and 3/4 in 1:11.35. 2-1 favorite Cuba, fourth early, came out 4 wide into the stretch and closed well, getting the lead inside the 1/8 pole and drawing off to a 1 1/2 length victory over Bythebeautifulsea in 1:41.51. It was another 1 1/2 lengths back to 16-1 Trueamericanspirit third.
Results Chart from DRF 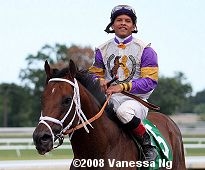 Cuba and happy jockey Pedro Cotto return after the race. Winning trainer Bobby DiBona said, "He's definitely the best claim I ever made. He's just a phenomenal horse." The horse had been claimed for just $18,000 in February. 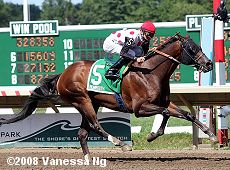 A field of 8 older horses sprinted 6 furlongs in the $100,000 Teddy Drone Stakes. 5-2 second choice Rockerfeller took the lead soon after the start and battled for the lead with 2-1 favorite Joey P. through fractions of 22.32 and 44.62. Entering the stretch, Castro asked Rockerfeller for run and got it, as he pulled ahead of the favorite through the lane to win by 3 3/4 lengths gate-to-wire in 1:08.09. It was a long 4 3/4 lengths back from Joey P. to 16-1 Who's The Cowboy third.
Results Chart from DRF 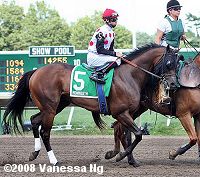 Rockerfeller in the post parade. Winning jockey Eddie Castro said, "I was supposed to sit off the early speed, but nobody went to the front and we ended up on the early lead." 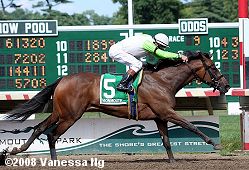 The distaff counterpart to the Teddy Drone is the $100,000 Regret Stakes for older fillies and mares sprinting 6 furlongs on the main track. 4-1 Hungarian Boatbaby led the field exiting the chute through a quarter in 22.04 before 10-1 My Sister Sue took over halfway down the backstretch, getting the half in 44.74. However, in mid-stretch, Hungarian Boatbaby came back inside the final furlong to get the win by a length over late-running 6-1 Solarana in 1:09.62. It was just 1/2 a length back to My Sister Sue third, while 2-1 favorite Dixie Dreamer failed to fire, finishing fifth in the 10-horse field.
Results Chart from DRF 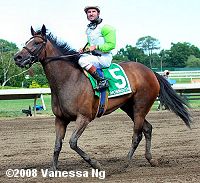 Hungarian Boatbaby returns after the race. Winning jockey Kent Desormeaux said, "She broke as sharp as a tack. She left there bounding from the gate." 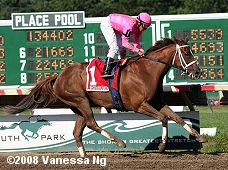 The $100,000 Lady's Secret Stakes featured 9 older fillies and mares go 1 1/16 miles on the main track. 3-1 second choice Devil House was loose on the lead through fractions of 23.31, 46.63, and 1:10.89 with 7-1 Salty Response in behind in second the whole way. Entering the stretch, Salty Response came off the rail for room taking over the lead at the 1/8 pole and drawing away to win by 5 lengths in 1:43.20. It was another 3 1/4 lengths back to 5-1 Rolling Sea third, while 5-2 favorite Talkin About Love raced well back early and lacked a rally, finishing sixth.
Results Chart from DRF 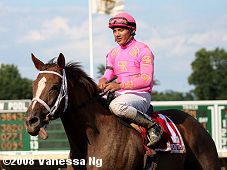 Salty Response and jockey Elvis Trujillo return after the race. Trujillo said, "The No. 1 hole helped. I had a great trip."

On the the 2008 Haskell results and photos