The highlight of Monmouth Park's meet is the $1 million Haskell Invitational (G1). A field of nine 3-year-olds went to the starting gate in this mid-summer classic, with Kentucky Derby and Belmont Stakes runner-up Bluegrass Cat sent off as the even-money favorite over 2-1 Strong Contender, winner of the Dwyer Stakes in his last start. Local hope Praying for Cash was the 9-1 third choice, having won the Long Branch Breeders' Cup over the same track on July 15. A crowd of 42,318, the fifth largest in stakes history, was on hand to watch the race on a sunny afternoon in Oceanport.

As expected, Praying for Cash took the lead right away and battled with 10-1 Deputy Glitters around the clubhouse turn through an initial quarter in 23.62. Down the backstretch, Deputy Glitters dropped back a bit allowing Praying for Cash an uncontested 4-length lead after a half in a slow 47.52. Praying for Cash still held a 1 1/2 length lead at the top of the stretch after 3/4 in 1:11.85, but the closers were moving in on the pacesetter. Bluegrass Cat, who had raced in fourth early while racing out of trouble wide throughout, was gaining with every stride around the far turn. The heavy favorite took over the lead inside the 3/16 pole and drew away to win by 7 lengths over Praying for Cash in a time of 1:48.85 for the 1 1/8 mile feature. It was another 1 1/4 lengths back to Strong Contender in third, while Deputy Glitters faded to finish ninth. 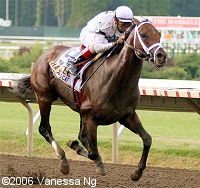 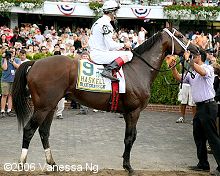 Bluegrass Cat in the winner's circle. Winning trainer Todd Pletcher said, "He's been doing so well since the Belmont Stakes that we were enthusiastic about this race. Although you never envision something as dominating as this. His performance today is as good as any 3-year-old's this year. To win a Grade 1 as significant as the Haskell puts him in the elite category as a racehorse and prospective sire." Asked where Bluegrass Cat would start next, Pletcher added, "We only have 20 days to the Travers, which gives the horses who ran in the Jim Dandy an extra week on us. We'll let him tell us how he bounces out of this." 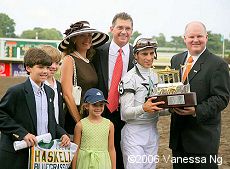 The happy connections with the Haskell trophy. Winning jockey John Velazquez said, "We were able to get good position going down the backstretch and he was pulling on me just waiting for me to ask him to run. When I called on him, that was it. He really just took off, went right by that horse (Praying for Cash) turning for home. He did the whole thing really easily. It was a very impressive race from him." 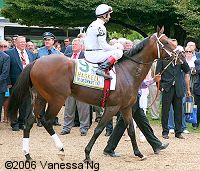 Bluegrass Cat in the paddock before the race. He was quite lathered up on his neck by the time the race started, but it didn't seem to slow him down. This was his first race since finishing second in the Belmont on June 11. 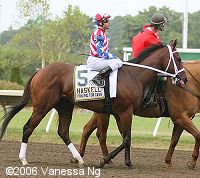 Second place finisher Praying for Cash in the post parade. His jockey Joe Bravo said, "This horse ran awesome. Down the backside, I had lots of horse and all I could think about was the gold. This is a great horse." Trainer Kelly Breen added, "I left it in Joe's hands. I said to make sure he breaks sharp and he can go to the front. I was watching the race closely; when he spurted away at the 3/8 pole I thought he had a big shot. He ran a big race. I couldn't expect much more than winning. He ran great. We were just second best." 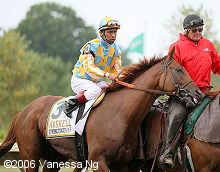 Third place finisher Strong Contender in the post parade. He was acting up quite a bit in the paddock as well as here. His trainer John Ward Jr. said, "It was a polo match around the first turn. He had a rough trip. We got crammed, rammed, and bammed. The winner got away clean. That's horse racing. Anything that takes that much knocking around early in the race is tough to overcome. He had a kind of coming of age today. You had to be there at the half-mile pole. He was still fighting through horses and the winner was already gone. We'll see how he comes back. He was sharp in the post parade. He was a happy horse today." Jockey Edgar Prado added, "Unfortunately the rail was dead today so that hurt us. I tried to get outside, but it didn't work." 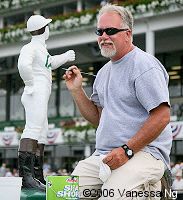 Tom Donnerallen paints the jockey statue by the winner's circle with the colors of the new Haskell winner.