The $1 million Haskell Invitational Handicap (G1) is the highlight of the Monmouth Park summer meet, featuring the best 3-year-olds in the country going 1 1/8 miles on the main track, traditionally run on the first Sunday in August. This year, along with being a major prep for the Travers at Saratoga, it has added significance in that the Breeders' Cup World Championships will be coming to Monmouth for the first time this year, and many of the Haskell contenders have the Classic as an ultimate goal. A crowd of 43,106 was on hand on a warm sunny afternoon on the Jersey Shore, where a field of seven hopefuls (after Stormello scratched due to colic) went to post with Preakness winner Curlin sent off as the 9-10 favorite, making his first start since losing the Belmont to Rags to Riches. In to challenge him were 9-5 second choice Any Given Saturday, runaway winner of the Dwyer on July 4, and 5-1 third choice Hard Spun, winner of the Lane's End who was second in the Derby, third in the Preakness, and then fourth in his last start, the Belmont.

When the gate opened, 10-1 local hope Cable Boy as expected was sent to the lead by regular rider Jose Velez Jr. and opened up a 1 1/2 length lead on the clubhouse turn. Hard Spun and Any Given Saturday stalked him second and third respectively through fractions of 23.49, 47.11, and 1:10.70 over the fast track. Curlin saved ground on the clubhouse turn and sat in fifth down the backstretch. Entering the stretch, Cable Boy tired badly from his fast early pace allowing Hard Spun a brief taste of the lead, as Garrett Gomez moved Any Given Saturday three-wide to make his run. Any Given Saturday and Hard Spun hooked up at the 3/16 pole, but after a brief duel, Any Given Saturday shook him off with a furlong to go and drew off to win by 4 1/2 lengths in a time of 1:48.35. Curlin came out four wide into the stretch and put in a mild bid but was left with too much ground to make up, finishing a head behind Hard Spun in third. 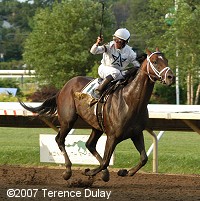 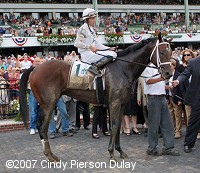 Any Given Saturday in the winner's circle. His jockey Garrett Gomez said, "It really all went to plan. I saw Xchanger and Curlin make early moves and I was still sitting on the inside. At the 1/4 pole I angled out to come after the leaders. I was happy to see (Cable Boy) dig a little, it helped me out, because I was sitting just behind him. I sat 2 to 3 lengths off the lead, and like I said I made my move right at the 1/4 pole. He's just an incredible horse and Todd's a great trainer. I'm happy to be along for the ride. I knew he was a better horse than he showed in the Derby. In that race we turned for home and he just flattened out. From that time, Todd got him back going in the right direction. When I sat atop him in the Dwyer he was a different horse. He was the same today. I was very confident. It was just a matter of what kind of trip I'd get from the one hole." 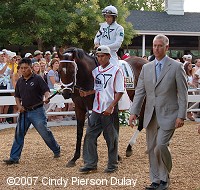 Any Given Saturday in the paddock with trainer Todd Pletcher on the right. Pletcher said, "Using Curlin and Hard Spun as how you judge the 3-year-olds, he beat them convincingly today. Obviously, he's as good as any 3-year-old in this crop. This horse came out of the Derby with a pretty good foot bruise that surfaced two days after. In his two races since, he's been extra special. He's a very hard horse and never had any problems. He has very good feet, but he stepped on something and a few days later was lame. The race unfolded the way we thought it would. I don't give jockeys instructions, and all I told Garrett was there were three main speeds and I wanted him to secure an inside position going around the first turn. I don't handcuff a rider like Garrett with too many instructions. I was hoping he would get the jump on Hard Spun around the turn. He didn't, but he was good enough to push his way through there." Pletcher said that the Breeders' Cup Classic is on target given his performance over the track. 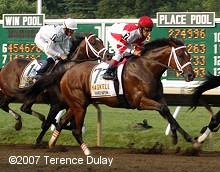 Second place finisher Hard Spun as they pass the stands the first time. His trainer Larry Jones said, "He ran good and the race set up perfectly for him. He picked up Cable Boy turning for home, but never really got a rest. Today he just got outrun. No excuses. He stumbled a little bit leaving the gate. Maybe he wasn't as close to Cable Boy as we wanted. We'll see how he comes out of this. He'll have a few races before (the Breeders' Cup Classic, the goal)." 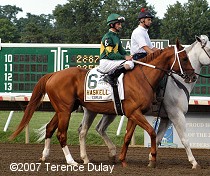 Third place finisher and beaten favorite Curlin in the post parade. His trainer Steve Asmussen said, "He ran third. We're going to have to figure out why he ran third. He ran the worst race of his career and we'll have to find out why." His jockey Robby Albarado said, "I had a perfect trip and when we kicked for home he gave me some run. He ran real hard and just couldn't get past the leaders. He felt good, Steve does a great job of getting this horse ready but he just couldn't get it done today. He may have needed a rest today but he'll bounce back and be fine." 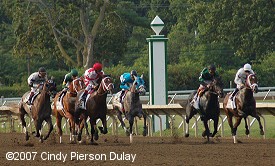 The field for the Haskell shortly after the start of the race with local favorite Cable Boy out front followed by Any Given Saturday on the inside and Hard Spun on the outside. 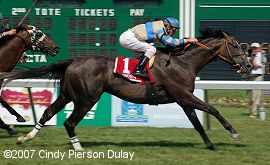 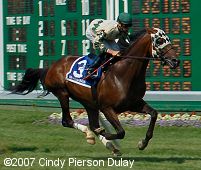 There were 6 stakes races on the undercard at Monmouth on Sunday afternoon. The $150,000 Oceanport Stakes (G3) featured older horses going 1 1/16 miles on the turf. 5-1 fourth choice Silent Roar sat well off the pace set by 4-1 third choice Smart Enough, then Stewart Elliott took him four wide into the stretch and he closed with a rush to win by a length over 26-1 Kiss The Kid (right) in 1:38.99 over the firm course. 6-5 favorite Kip Deville finished a neck back in third. Winning owner-trainer Michael Moran said, "He has a lot of talent. You just don't know which horse will show up, the aggressive type or the one that wants to lay back." Jockey Stewart Elliott added, "We ended up sitting a few more lengths off of it today, but we got a good trip. When I asked him, he really picked it up for me."
Results chart from Equibase 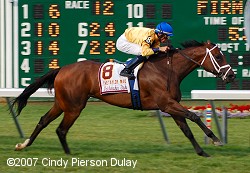 The $150,000 Matchmaker Stakes (G3) featured older fillies and mares going 1 1/8 miles on the turf. 11-10 favorite Roshani stalked the pace of 24-1 Humoristic through 3/4 in 1:12.78, then launched her bid at the top of the stretch to win by a length over late-running 14-1 Trick's Pic in 1:47.55. Pacesetter Humoristic was third. Winning trainer Todd Pletcher said, "We've been high on this filly. I was concerned about the way the race would set up, because there didn't appear to be a lot of speed. I told Garrett (Gomez) to do what he feels. She had to move a little earlier than Garrett would have liked, but she was good enough to overcome that." Pletcher and Gomez went on to win the next race on the card, the Haskell.
Results chart from Equibase 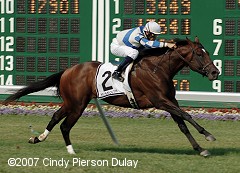 The $100,000 Jersey Derby featured 3-year-olds going 1 1/16 miles on the turf. 4-5 favorite Buddy's Humor led from gate to wire under jockey Garrett Gomez, setting a slow pace of 50.37 for the half and then drawing clear through the stretch to win by 3 lengths in 1:41.64 over 11-1 Chaluiwitcane. It was a long 1 3/4 lengths back to 7-2 second choice French Vintage in third. This was the second turf win in three tries for the colt by Distorted Humor, who broke his maiden first time on the grass on June 10 at Belmont and was second in the Lexington Stakes last out, also on the Belmont turf.
Results chart from Equibase 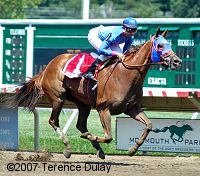 The $100,000 Lady's Secret Stakes saw a field of 7 distaffers go 1 1/16 miles on the main track. 9-10 favorite Prop Me Up sat in fifth off the pace set by entrymate Cachinnated, then split horses mid stretch to win going away by 1 3/4 lengths over 7-2 Tap Gold in 1:44.95. Winning trainer Gregg Sacco said, "We just got these fillies two weeks ago. They came to us in great shape. She's such a nice filly. When Joe (Bravo, jockey) asked, she responded like she always does."
Results chart from Equibase 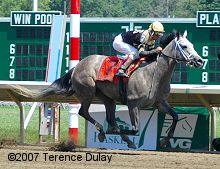 The $100,000 Regret Stakes featured older distaff sprinters at 6 furlongs on the main track. 12-1 Pure Disco stumbled at the start unseating rider Daniel Centeno, as 3-5 favorite Oprah Winney took over the lead which she would not relinquish. Under skillful handling by jockey Edgar Prado to avoid the loose horse, she saved ground around the turn and drew away to a 3 1/4 length victory over 5-2 second choice Sweet Fervor in 1:09.35. Winning trainer Richard Dutrow Jr. said, "We thought Pure Disco was the speed and we wanted to sit right off her. But she lost the rider and our horse broke so good, we had to stay on the lead. She has been training better than ever and keeps getting better and better. One of the reasons we ran here was to get a start over the track for a visit back in a couple of months (for the Breeders' Cup Filly and Mare Sprint)."
Results chart from Equibase 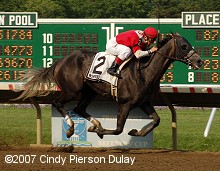 The $65,000 Lincroft Handicap featured older New Jersey-breds go 1 mile 70 yards on the main track. 4-1 third choice Fagedaboudit Sal took over the lead soon after the start and led at every call through fractions of 22.53, 45.90, and 1:10.11, holding his advantage through the stretch to finish 2 1/4 lengths clear of 3-1 second choice Carrots Only in a time of 1:41.22. It was a long 7 3/4 lengths back to 9-1 Rolled Up in third, while 2-1 favorite Meadow Blue failed to fire and was seventh. The win gave jockey Chuck Lopez four victories on the card.
Results chart from Equibase 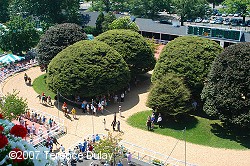 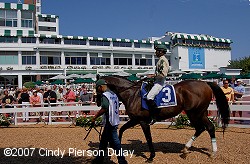 Left: The paddock and walking ring at Monmouth Park.

Right: A view of the clubhouse building from the paddock.