On Sunday, the Triple Crown alumni were back for a "class reunion" at Saratoga Race Course and Monmouth Park. Derby and Preakness winner Funny Cide shipped south to New Jersey to contest the Grade 1 Haskell Invitational Handicap, while Belmont winner Empire Maker stayed in New York State for the Grade 2 Jim Dandy. Each was the heavy favorite in his respective race, as both were using these races as preps for their eventual showdown at Saratoga in the Travers Stakes on August 23. Both failed to live up to their expectations, meaning the Travers could have a larger, competitive field instead of a two-horse race it could have been.

In the Jim Dandy, a field of six (down from an originally drawn seven after Awesome Time scratched out) faced the starter for the lion's share of the $500,000 purse. Empire Maker was respected by the public, sent off as the 3-10 favorite, with Strong Hope the almost 7-1 second choice.

When the gate opened, John Velazquez sent Strong Hope to the front to the lead. 24-1 longshot During settled in behind, as the pair set early fractions of 23.66 and 47.17, after which During began to drop from contention to his eventual last place finish. Jerry Bailey kept heavy favorite Empire Maker back in fifth early, saving energy for the stretch drive.

Turning for home, Strong Hope continued to hold the lead, after 3/4 in 1:10.63, with 10-1 shot Tafaseel attempting to challenge to no avail. Straightening out for home, Empire Maker, as expected, rallied strongly to the outside but Strong Hope held him off to win by 1/2 a length in a final time of 1:48.10 for the 1 1/8 mile feature. It was another 2 1/2 lengths back to the 30-1 longest shot Congrats, who was last early but finished well.

Soon after the Jim Dandy was made official, seven horses faced the starter at Monmouth in the $1 million Haskell Invitational before a record New Jersey racing crowd of 53,638. Funny Cide was sent off as the even-money favorite, with Peace Rules the second choice at 5-2. As expected, jockey Edgar Prado sent Peace Rules immediately to the lead, and rattled off decent fractions of 23.29, 47.06, and 1:10.86, while the field remained a length and a half behind. Funny Cide remained in fifth position through the early running.

Turning for home, Peace Rules widened his lead to 3 lengths while Funny Cide and Jose Santos began a small move, splitting rivals and getting to the outside for a late run at the leaders. However, it was too late. Funny Cide's jockey, Jose Santos, said, "He broke real nice. I had a good hold of him, but he just spit the bit at the six-furlong pole. After that he was just traveling along. He didn’t accelerate. He just wasn’t the same horse I rode in his previous races." 4-1 third choice Sky Mesa, who had stalked the pace in third early, also came running late eating into Peace Rules' advantage but could only manage second, beaten 1 3/4 lengths by the gate-to-wire winner. It was another 7 1/4 lengths back to Funny Cide in third. The final time for the 1 1/8 miles was 1:49.32 over a fast surface.

Jim Dandy winning jockey John Velazquez said, "He popped out of there. I just wanted to get him comfortable. He went :23 and :47 and that's easy enough for him. He's used to running faster. I asked him for his best off the turn. I could see Empire Maker on my outside. My horse was running hard. I hit him a few times; sometimes he handles the whip better than other times. He was okay today. I've never ridden a horse that has improved like this" Trainer Todd Pletcher said, "We weren't taking a chance. He kept reeling off wins. Empire Maker was revving up at the top of the stretch. He had the length of the stretch to get by and couldn't. You've got to give this horse a lot of credit, he runs hard and keeps going. He's a big horse that took a while to come to hand."

Bobby Frankel, trainer of beaten favorite Empire Maker, said "He's a funny-running horse sometimes who seems to run in spots. It looked like he was going to finish third. Then he took off in the last sixteenth of a mile. I don't that feel bad about losing this race. I think this race will set him up for the Travers." Jerry Bailey, aboard Empire Maker, said, "He settled in the back. I let the front runners go. He made a run and couldn't get there." 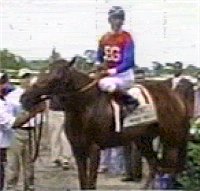 Peace Rules gave trainer Bobby Frankel his 17th Grade 1 win of the year in the Haskell. Frankel said, "He had been training really well - the works indicate that. He's also a good horse. I have to think about running him in the Travers. There's a chance that both horses may be going in the Travers. If Peace Rules does go in the Travers, that's going to make the race really interesting. But I don't know if he is going to be able to get the mile and a quarter." He also mentioned possibly entering Peace Rules against older horses in the Pacific Classic at Del Mar on August 24.

Haskell winning jockey Edgar Prado said, "He was very sharp today. He wanted to go out there running. We wanted to lay second or third behind the speed, but with no one willing to take the lead, we took it. In the stretch he found another gear and kept on running. I felt someone coming at me late. I didn't know it was Sky Mesa, but my horse was home by then."

Barclay Tagg, trainer of third place finisher and beaten favorite Funny Cide, said, "I don't know what to say. He didn't do any running."

More on Saratoga
More on Monmouth
History of the Haskell Invitational