The $1 million William Hill Haskell Invitational Stakes (G1) is the highlight race of the Monmouth Park meeting, featuring some of the top 3-year-olds going 1 1/8 miles over the main track in Oceanport, New Jersey. A crowd of 36,284 enjoyed a cloudy Sunday afternoon with temperatures in the upper 70's. Wood Memorial (G1) and Pegasus (G3) winner Verrazano was sent off as the 11-10 favorite in the field of 7. In to challenge him uncluded 3-1 second choice Oxbow, winner of the Preakness (G1) then second in the Belmont (G1), and 5-1 third choice Power Broker, winner of the Easy Goer last out.

Jockey Gary Stevens sent Oxbow to the lead first time by and he set fractions of 23.90, 48.22, and 1:12.43 over the fast main track while pressed by Verrazano just to his outside. At the top of the lane, John Velazquez asked Verrazano for run and the favorite easily ran past the now tiring Oxbow. Opening a 3 length lead over Power Broker at the 1/8 pole through 1 mile in 1:37.96, Verrazano continued to power away, winning by a stakes record 9 3/4 lengths in 1:50.68. It was 6 lengths back from Power Bwoker to late-running 8-1 Micromanage third. 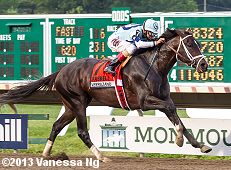 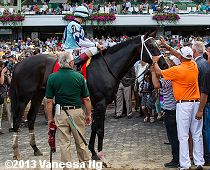 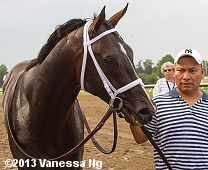 Left: Verrazano in the winner's circle. Trainer Todd Pletcher said, "He made a huge statement today. This was one of the most impressive, if not the most impressive, races by any 3-year-old this year. I would say this was his most impressive race for a horse that's near perfect minus the sloppy race in the Kentucky Derby. You couldn't have drawn it up any better. Power Broker came to his hip and Johnny asked him to go and he immediately took over the race."

Right: Verrazano heads back to the barns after the race. 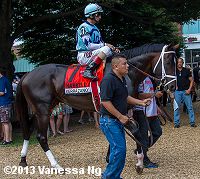 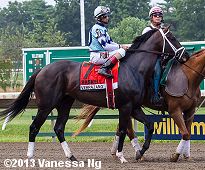 Left: Verrazano in the paddock before the race. Winning jockey John Velazquez said, "We had the perfect trip. He was incredible today. When I asked him, he was right there. He was in the perfect spot and (Oxbow) was moving easily, so I moved him out to the middle of the track so no one could keep me pinned in. It looked like Oxbow was going a little slow on the lead, so I went up to put a little pressure on him. Power Broker moved at us a little, and my horse just took off." 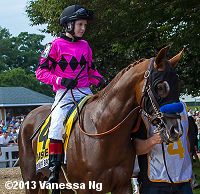 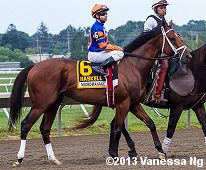 Left: Second place finisher Power Broker in the paddock before the race. His trainer Bob Baffert said, "He ran a good race. I think he thinks he won. I don't know if he ever saw Verrazano go by. We were a little overmatched today. He's still a very immature horse, and he got a lot out of the race."

Right: Third place finisher Micromanage in the post parade. The 8-1 fifth choice was sixth about 6 lengths off the early pace under jockey Joe Bravo, then passed tired horses to finish third beaten 15 3/4 lengths while nosing out pacesetter Oxbow in a photo. The Todd Pletcher trainee improved his record to 3 wins, 1 second, and 1 third in 7 starts, earning $276,200 for owner Mike Repole. 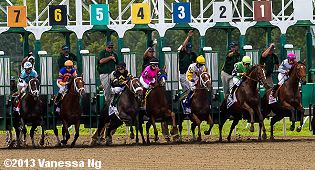 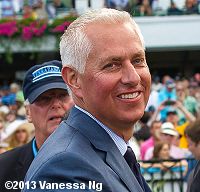 Left: The horses break from the gate for the 2013 Haskell Invitational.

Right: Winning trainer Todd Pletcher smiles in the winner's circle. Pletcher said, "The plan all along was to run in the Haskell, and if he showed he could handle distances of 1 1/8 plus, the Travers would be a logical next spot. The way he finished today over a track that's been deep and demanding all week with his ears pricked at the wire showed he handled it pretty well."