The 36,284 fans who came out to Monmouth Park on Sunday afternoon for the Haskell Invitational enjoyed 6 stakes races on the undercard. Spectators and participants enjoyed a mostly cloudy day with temperatures in the upper 70's, with a fast main track and firm turf course. Thankfully the forecasted rain mostly held off with just some intermittent showers. 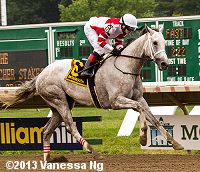 The richest race on the undercard is the $200,000 Molly Pitcher Stakes (G2) for older fillies and mares going 1 1/16 miles on the main track. Santa Margarita (G1) winner Joyful Victory was sent off as the 7-10 favorite in the field of 5 off her 5th place finish in the Ogden Phipps (G1), over 2-1 second choice Wine Princess, 5th in the Fleur de Lis (G2), and 11-2 third choice Lady Samuri, winner of the Lighthouse Stakes.

Jockey Rosie Napravnik sent Joyful Victory to the lead and she set fractions of 24.14, 47.85, and 1:12.47 while stalked by Lady Samuri. Entering the stretch, Joyful Victory opened up on the field, finishing 7 1/2 lengths in front of Wine Princess in 1:46.09. It was another 7 1/4 lengths back to Lady Samuri third. 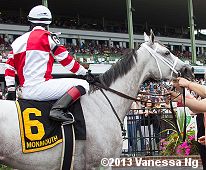 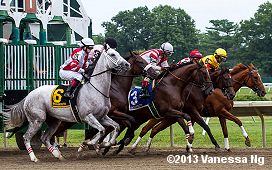 Left: Joyful Victory in the winner's circle. Jockey Rosie Napravnik said, "You have to get 47 for the first half. She's fast and she's got natural speed -- she pretty much tells you what she wants to do." Trainer Larry Jones said the plan is to get to the Breeders' Cup Ladies' CLassic at Santa Anita.

Right: The horses break from the gate for the Molly Pitcher. 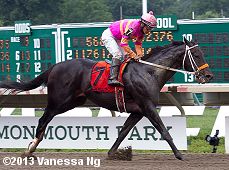 The $200,000 Monmouth Cup Stakes (G2), formerly run as the Meadowlands Cup, featured a field of 7 older horses going 1 1/16 miles on the main track. Alysheba (G2) winner Take Charge Indy was sent off as the 7-10 favorite off his last place finish in the Stephen Foster (G1), over 5-2 Hymn Book, second in the Criminal Type, and 7-1 Pants on Fire, third in the Mountain View Handicap. Jockey Gary Stevens sent Take Charge Indy to the lead, but after setting opening fractions of 23.97 and 47.43, Stevens sensed an injury and pulled up. Pants On Fire inherited the lead through 3/4 in 1:12.84. Hymn Book, 7th early, attempted a late rally but Pants on Fire easily held him off by 1 3/4 lengths in 1:45.86. It was another 1/2 length back to 13-1 Ponzi Scheme third. 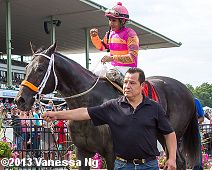 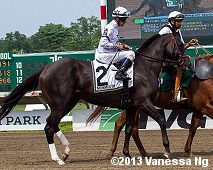 Left: Pants on Fire in the winner's circle.

Right: Beaten favorite Take Charge Indy in the post parade. He was pulled up after a half mile and vanned off after suffering a condylar fracture of the left foreleg. He had surgery to repair the injury and has been retired to stand at WinStar Farm in 2014. Jockey Gary Stevens said, "I was having the ride of my life, just having a ball, just cruising, figuring how far I wanted to win by. I heard a loud pop at the half-mile pole. He tried to go on, but then he helped me get himself pulled up, a very intelligent horse." 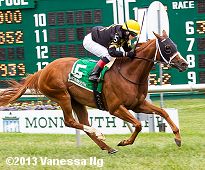 The $150,000 Matchmaker Stakes (G3) featured a field of 7 older fillies and mares going 1 1/8 miles on the turf. All Along (G3) winner Channel Lady was the 2-1 favorite over 5-2 Starstruck, third in a Churchill allowance last out, and 3-1 Julie's Love, second in the Dance Smartly (G2) at Woodbine.

7-2 fourth choice Minakshi battled for the lead with Channel Lady through fractions of 25.44, 50.78, and 1:14.85 over the firm course while stalked by Julie's Love. Entering the stretch, Channel Lady ti red, as Starstruck, 4th early, moved up to take the lead through 1 mile in 1:37.82. 6-1 Naples Bay put in a late rally but Starstruck cruised past the post 1 1/4 lengths in front in 1:49.27. It was just 3/4 length back to Minakshi third, while Channel Lady was sixth. 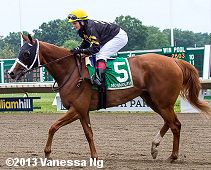 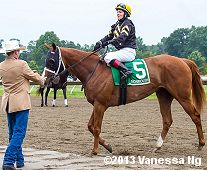 Left: Starstruck returns after the race. Jockey Rosie Napravnik said, "I had a good trip. It was a pretty slow pace so we just inched closer and closer and she finished tremendously. She's improved every time out and I was happy to get a good trip from her."

Right: Trainer Larry Jones with Starstruck after the race. Jones said, "She didn't like the soft turf she was catching in Europe, and we figured she'd like the firmer turf. We've tried to figure her out a little bit. Hopefully, we're finally getting all the keys going together." 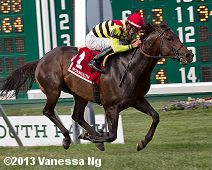 Immediately before the Haskell, a field of 10 older horses contested the $150,000 Oceanport Stakes (G3) at 1 1/16 miles on the turf. Tampa Bay Stakes (G3) winner Swift Warrior was the 5-2 favorite off his close third in the Colonial Turf Cup (G2), over 3-1 second choice Hudson Steele, winner of the Da Hoss Stakes, and 4-1 Silver Max, third in the Cornhusker Handicap (G3).

Jockey Robby Albarado sent Silver Max to the lead and he set fractions of 23.84, 47.08, and 1:09.81 while pressed by 16-1 Tune Me In. At the top of the stretch, Silver Max began to extend his lead, opening up a 3 length advantage midstretch through 1 mile in 1:33.85. 9-2 fourth choice Howe Great rallied from sixth but Silver Max finished 5 3/4 lengths in front in 1:40.02. It was another 1 3/4 lengths back to late-running Hudson Steele third, while Swift Warrior checked in sixth. 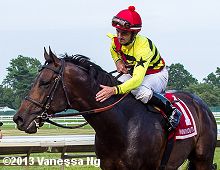 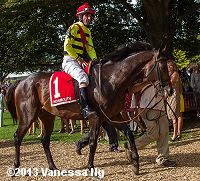 Left: Silver Max returns after the race. His jockey Robby Albarado said, "It's pretty textbook. He's pretty comfortable and content on the lead. He has exceptional gate speed, so I used it to his advantage today. He's got high cruising speed, and he extended to the wire very nicely." Trainer Dale Romans added, "It took a little while to get him untracked this year, but I think he's back."

Right: Silver Max in the paddock before the race. 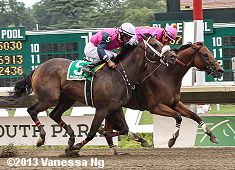 Kicking off the stakes action on Haskell day was the $100,000 Teddy Drone Stakes for older horses sprinting 6 furlongs on the main track. Jockey Paco Lopez sent 3-5 favorite Immortal Eyes to the lead exiting the chute and he clicked off quick fractions of 21.86 and 44.92 while pressed by 13-1 He Can Run. Opening a 2 length lead into the stretch through 5/8 in 57.41, Immortal Eyes had to hold off late-running 3-1 Javerre by a neck to win in 1:10.82. It was another 2 1/4 lengths back to He Can Run third. 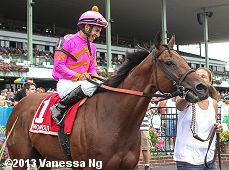 Immortal Eyes in the winner's circle. Jockey Paco Lopez said, "I was bumped a bit on the backstretch, but got to the front. Once, we got to the stretch, I hit him twice and he started to move. Luckily, I was able to hold off the five (Javerre) and get to the wire." 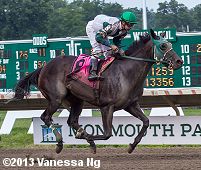 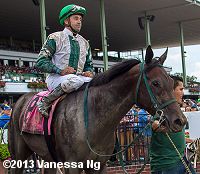 Geeky Gorgeous in the winner's circle. Winning trainer Danny Lopez said, "I told Joe (Bravo), 'Let her fall out of there and be four or five off of it,'" A quarter of a mile out of the gate, I knew she was going to be awful tough because he had her placed perfectly. I knew when he asked her to run, she was going to fire."

On to the 2013 Haskell results and photos