The $1 million Haskell Invitational Stakes (G1) is the highlight race of the Monmouth Park meeting, featuring some of the top 3-year-olds going 1 1/8 miles over the main track in Oceanport, New Jersey. A crowd of 35,253 enjoyed a mostly sunny Sunday afternoon with temperatures in the upper 70's. Belmont Stakes (G1) runner-up Paynter was sent off as the even-money favorite in the field of 6. In to challenge him included 2-1 second choice and Wood Memorial (G1) winner Gemologist, unraced since a distant 16th in the Kentucky Derby (G1), and 7-2 third choice Dullahan, third in the Derby but 7th in the Belmont after winning the Blue Grass Stakes (G1). 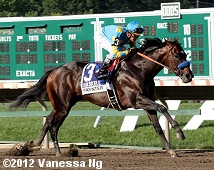 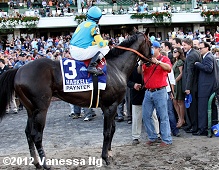 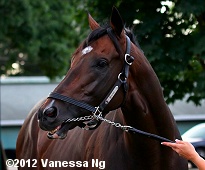 Left: Paynter in the winner's circle. His trainer Bob Baffert, winning his 6th Haskell, said by telephone from Del Mar, "When you win, they always feel like the first one. They're all exciting and they never get old. When he turned for home, he just pinned his ears and took off. Jimmy (Barnes, assistant) have always been very high on him. He's tough. He's strong. He can handle what you throw at him. I've always felt he could come off the pace. I think we gave (Bejarano) about 50 sets of instructions."

Right: Paynter back in the barns after the race. Baffert said Paynter would go next in the Travers Stakes at Saratoga. 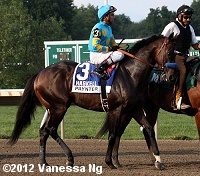 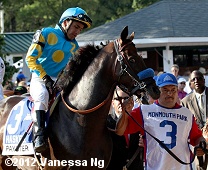 Left: Paynter in the post parade. Winning jockey Rafael Bejarano said, "I was so impressed with the way he ran. I knew I could from off the pace if I wanted to. I pulled him to the outside and that was that. Gemologist floated me out a little into the first turn, but it didn't matter. I knew Gemologist was the horse to beat, but if he wanted to go to the lead, that was fine. My horse was so relaxed the whole way."

Right: Paynter in the paddock before the race. 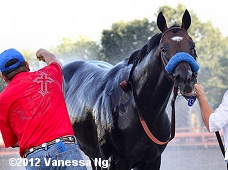 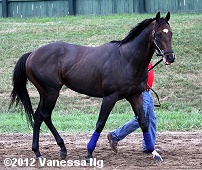 Left: Paynter gets hosed off after the race. Assistant trainer Jimmy Barnes said, "We've been training him to sit off other horses. It's not like he's rank or anything. A lot of our horses seem to end up on the lead. So I was glad to see Gemologist jump to the front and Rafael get outside of him. He was in a perfect spot in the middle of the track."

Right: Paynter heads back to the barn. 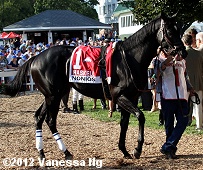 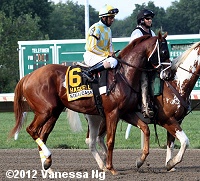 Left: Second place finisher Nonios in the paddock before the race. His jockey Corey Nakatani said, "We were a little unfortunate at the post position draw to get the rail. I would have loved to be on the outside. That would have given us a better opportunity to get a little better of a trip. I thought he ran a good race, but just second best."

Right: Third place finisher Stealcase in the post parade. The 28-1 longest shot was last 5 1/2 lengths early under jockey Shaun Bridgmohan, then passed tiring horses in the stretch to get third beaten 8 1/4 lengths. The Mark Casse trainee improved his record to 2 wins, 1 second, and 2 thirds in 9 starts, earning $217,702 for owner John Oxley.