The 35,253 fans who came out to Monmouth Park on Sunday for the Haskell Invitational enjoyed 5 stakes races on the undercard. Spectators and participants enjoyed a mostly sunny day with temperatures in the upper 70's, with a fast main track and firm turf course. 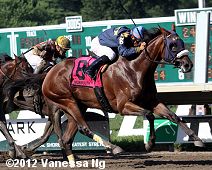 The richest race on the undercard is the $200,000 Molly Pitcher Stakes (G2) for older fillies and mares going 1 1/16 miles on the main track. R Gypsy Gold was sent off as the 2-1 favorite in the field of 8, exiting a win in the Endear Stakes at Belmont Park. In to challenge her included 7-4 second choice Afleeting Lady, second in the Fleur de Lis (G2) at Churchill Downs, and 5-1 third choice Derwin's Star, winner of the Bed O'Roses (G3) at Belmont. 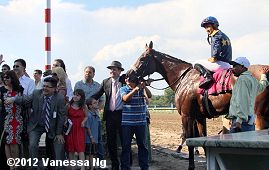 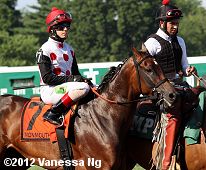 Left: Brushed by a Star in the winner's circle. Trainer Grant Forster said, “We gave her the winter off, and she’s had a great four-year-old season. She’s a big, long, strong filly and she’s come back even better this year. This is a great example of what a horse can do when they get their confidence back." 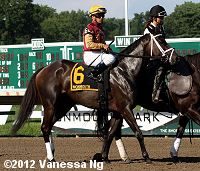 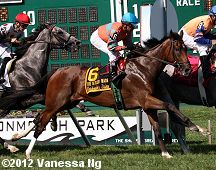 The $150,000 Taylor Made Matchmaker Stakes (G3) featured a field of 6 older fillies and mares going 1 1/8 miles on the turf. Gallorette Handicap (G3) third place finisher Laughing was sent off as the 6-5 favorite over 7-4 second choice Silver Screamer,winner of the Eatontown (G3), and 4-1 third choice Unbridled Humor, third in the Eatontown.

Laughing and Silver Screamer dueled for the lead for the first mile through fractions of 24.55, 48.87, 1:12.80, and 1:36.63 over the firm turf, while stalked by Unbridled Humor third. In mid-stretch, Silver Screamer and Unbridled Humor tired, allowing Laughing to carry her speed to the line, finishing a length in front of late-running 10-1 Shimmering Momennt in 1:48.93. It was a long 3 1/2 lengths back to 12-1 Island School third. 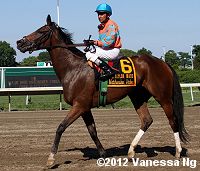 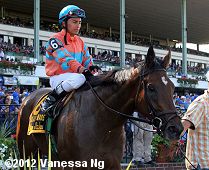 Left: Laughing returns after the race. Winning trainer Alan Goldberg said, “She’s a nice filly. She never had a real chance in the (Gallorette) with the heat and the shipping. But she’s been doing great since then, and I thought she would run well today.”

Right: Laughing in the winner's circle. Jockey Rafael Bejarano said, "The other horse went right to the front, but under the wire the first time, I saw he took a little hold, so I sent my filly to the lead. They were rocking in the first part, and I was a little worried, but I put her on the lead, and that's where she was very comfortable." 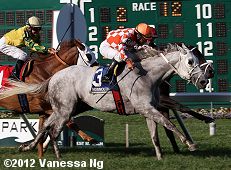 Immediately before the Haskell, a field of 7 older horses contested the $150,000 Oceanport Stakes (G3) at 1 1/16 miles on the turf. Queen'splatekitten, third in the Red Bank (G3) last out, was sent off as the 6-5 favorite over 5-2 second choice Get Serious, winner of the Red Bank, and 3-1 third choice Admiral Perry, off an allowance win.

26-1 longest shot Tune Me In battled for the early lead with Get Serious through fractions of 25.85, 50.12, and 1:13.64 over the firm course, with 8-1 Crepuscolo and favorite Queen'splatekitten stalking the lead pair third and fourth. Entering the stretch, Crepuscolo tired as Tune Me In took a short lead to the 1/8 pole through 1 mile in 1:37.36. Queen'splatekitten put in a mild rally but Tune Me In held him off by 1/2 a length in 1:43.39. It was a neck back to Get Serious third. 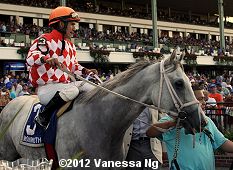 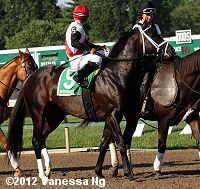 Left: Tune Me In in the winner's circle. His jockey Paco Lopez said, “The pace was so slow so I just wanted to wait as long as possible. I was very confident because the pace was slow. At the 1/4 pole, I asked him and he finished strong." Trainer Bruce Alexander added, "I knew no one wanted to go with Get Serious, so we did. The whole race was won when they went 25 and 50. He’s a good horse, and he showed it." 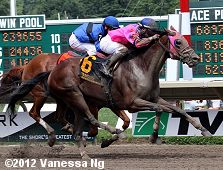 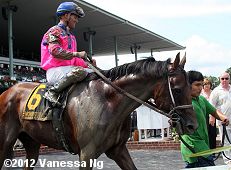 Gourmet Dinner in the winner's circle. The Bruce Brown trainee improved his record to 5 wins, 2 seconds, and 2 thirds in 14 starts, earning $1,067,277 for owner Our Sugar Bear Stable. 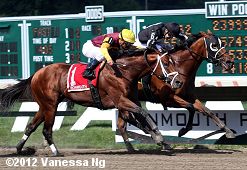 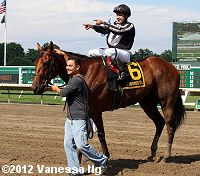 On to the 2012 Haskell results and photos