The $1 million William Hill Haskell Invitational Stakes (G1) is the highlight race of the Monmouth Park meeting, featuring some of the top 3-year-olds going 1 1/8 miles over the main track in Oceanport, New Jersey, also looking for automatic entry into the Breeders' Cup Classic (G1) under the "Win and You're In" promotion. A crowd of 35,983 enjoyed a sunny Sunday afternoon with temperatures in the high 80's. Untapable was sent off as the 7-5 favorite in the field of 9 off a 4 race win streak including the Rachel Alexandra (G3), Fair Grounds Oaks (G2), Kentucky Oaks (G1), and Mother Goose (G1), attempting to become the first filly since Rachel Alexandra to win the Haskell. In to challenge her included 9-2 second choice Bayern, winner of the Woody Stephens (G2) after 9th in the Preakness (G1), and 5-1 third choice Medal Count, 3rd in the Belmont (G1) after finishing 8th in the Kentucky Derby (G1).

Jockey Martin Garcia sent Bayern to the lead first time past the stands and he set fractions of 23.54, 47.66, and 1:11.16 over the fast track while pressed by 10-1 Wildcat Red and stalked by 7-1 Social Inclusion. Entering the lane, Bayern began to leave the field in his wake, opening up a 3 length lead at the 1/8 pole through 1 mile in 1:35.49. 11-1 Albano, 4th early, attempted to rally to no avail, as Bayern cruised under the line 7 1/4 lengths in frontg in a time of 1:47.82. It was another length back to Wildcat Red third, while favorite Untapable raced 5th early and lacked a rally, finishing 5th beaten 9 lengths. 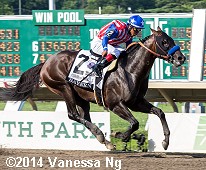 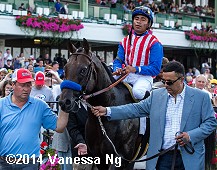 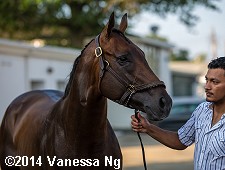 Left: Bayern in the winner's circle. Trainer Bob Baffert, celebrating his record 7th Haskell victory, said, "It's so exciting. I was hoping he'd be able to get the 1 1/8. Gary Stevens, after he rode him last time, said 'You have to let him route again. He'll just keep going.' We tried to slow him down in the past, but now we know we just have to utilize his speed. I didn't think he'd do it as devastating as that. It looks like he has it all together now. The only concern is that he needs to break, There is no Plan B. Before this, I said we were going to the King's Bishop, but I don't think I'll back him up after this. I'm so happy for (owner) Kaleem Shah. He has such a passion for racing."

Right: Bayern back at the barn after the race. 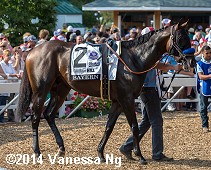 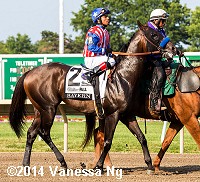 Left: Bayern in the paddock before the race.

Right: Bayern in the post parade. Winning jockey Martin Garcia, celebrating his third Haskell, said, "That was real impressive. Obviously, we were going to the lead. I wasn't surprised at how well he ran. He was cruising out there the whole way. He was able to set the fractions on his terms, and when we turned for home, he took off. Going into the race I wasn't worried about the filly or anyone. I knew I was on a really good horse. He showed how good he was today." 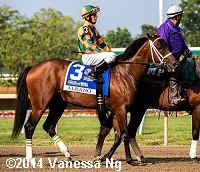 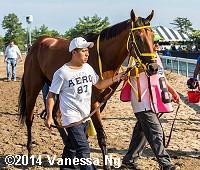 Left: Second place finisher Albano in the post parade. The 11-1 shot saved ground in 4th 2 lengths off the pace under jockey Kerwin Clark, then passed tired horses late but was no threat to the winner. The Larry Jones trainee improved his record to 3 wins. 3 seconds, and 1 third in 8 starts, earning $508,100 for owner-breeder Brereton Jones.

Right: Third place finisher Wildcat Red comes over before the race. The 10-1 shot pressed the pace in second after stumbling at the start, then tired late to finish third beaten 8 1/4 lengths. The Jose Garoffalo trainee improved his record to 5 wins, 3 seconds, and 1 third in 10 starts, earning $850,850 for owner Honors Stable Corp. 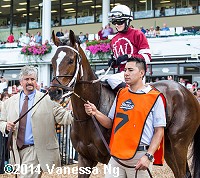 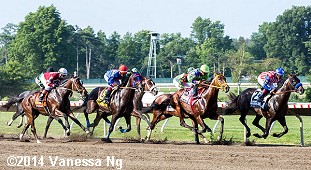 Left: Fifth place finisher and beaten favorite Untapable heads out to the track led by trainer Steve Asmussen. Asmussen said, "She didn't get away well at all, and was never in position to win the race the way the track was playing today."

Right: First time by in the Haskell Invitational with eventual winner Bayern out front and favorite Untapable in fifth. Jockey Rosie Napravnik aboard Untapable, who bumped with Social Inclusion at the start, said, "The horse next to us (Social Inclusion) acted up in the gate, so she got a little fussy and didn't get away well. We had the widest trip of everybody; she ran a hell of a race and ran as hard as she could." 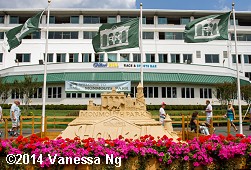