The $1 million Betfair Haskell Invitational Stakes (G1) is New Jersey's most prestigious race, featuring some of the top East Coast 3-year-olds going 1 1/8 miles over the main track at historic Monmouth Park in Oceanport, looking for automatic entry into the Breeders' Cup Classic (G1) under the Breeders' Cup Challenge Series "Win and You're In" promotion. Conditions were excellent for the 35,303 fans in attendance, with sunny skies and temperatures near 80. Timeline was sent off as the 9-5 favorite in the field of 7, undefeated in 4 starts including the Peter Pan (G3) and Pegasus Stakes (G3). In to challenge him included local hero and 2-1 second choice Irish War Cry, winner of the Wood Memorial (G1) but 10th in the Kentucky Derby (G1) and 2nd in the Belmont (G1), and 9-2 third choice Practical Joke, winner of the Dwyer (G3) after finishing fifth in the Kentucky Derby (G1).

7-1 Battle of Midway battled for the lead with Timeline and Irish War Cry through fractions of 23.93, 47.34, and 1:11.25 while stalked by Practical Joke. Entering the stretch, 7-1 McCraken, 5th early, swept 4 wide to gain a short lead through 1 mile in 1:35.65. Girvin, last for the first 5f under Robby Albarado, circled the field into the lane and rallied on the outside to get up by a nose in 1:48.35 over the fast main track. It was another 1/2 length back to Practical Joke third, and a long 4 3/4 lengths more to Irish War Cry fourth, with favorite Timeline another 3 lengths back in 5th. 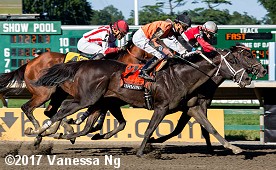 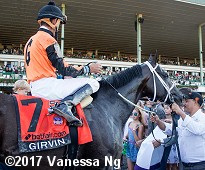 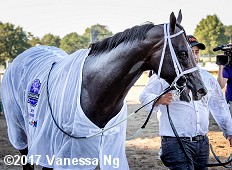 Left: Girvin in the winner's circle. Winning owner Brad Grady said, "I don't ever look that far outside the box,. What I knew is that our horse was doing really good. We had a really good idea our horse was going to run huge. The only bad race he's had was the Derby and we all know what happened there, a horrible, horrendous trip. In the Ohio Derby we got nipped by a really good horse (Irap) that I happen to buy as a yearling and resell as a 2-year-old. And the way Irap came back and ran, you had to think Girvin was going to come back and run a really good race."

Right: Girvin heads back to the barn. Winning jockey Robby Albarado said, "I honestly don't think we've seen the depth of Girvin. His only one bad race was in the Kentucky Derby. He didn't look as good and feel as good as he does now. He's grown up a whole lot. I've got to race against him a bit so I got to watch behind him. Today I was on top of him and it felt good. I've gotten beat in this race too many times, it's great to finally win it. Point Given got me at the wire and then I had Curlin. This is wonderful. McCraken got the jump on me and kept me inside, but my horse never lost momentum, so I wasn't concerned. He's really coming into his own right now." 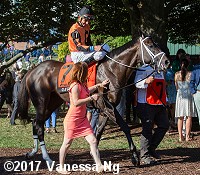 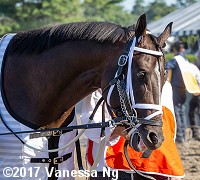 Left: Girvin walks over from the barn before the race.

Right: Girvin in the paddock before the race, led by retired jockey Rosie Napravnik, wife and assistant to winning trainer Joe Sharp. Sharp said, "The timing for the Travers is pretty good at this point. At this point Grivin has gone above and beyond what we've asked him to do. Anything now is just frosting, honestly. But he's coming out forward. The Breeders' Cup is in our future, hopefully, and it will just be a decision of if the 1 1/4 miles is going to be for Girvin. I think his race today indicated that the Classic will be most fitting based on his running style." 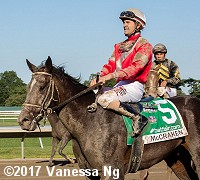 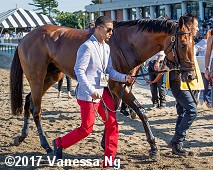 Left: Second place finisher McCraken returns after the race. Jockey Brian Hernandez Jr. said, "Turning for home he put in a huge run and I thought we might have it but he just couldn't hold off that other horse. It just wasn't our day but we have to be so proud of our horse."

Right: Third place finisher Practical Joke walks over from the barn before the race. Trainer Chad Brown said, "He was right there at the wire in a three-way photo. He gave it his all. He had to pause a little turning for home, but other than that he had a good, ground-saving trip. He was right there with a good fighting chance to win and it was a great race. The two horses that finished just ahead of Practical Joke ran outstanding, its just unfortunate there had to be a loser between them. Hats off to the connections of Girvin. In an evenly matched race they came out on top." 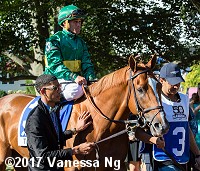 Left: Fifth place finisher and beaten favorite Timeline in the walking ring. Jockey Javier Castellano said, "When he broke slow out of the gate I knew I had to change all my plans. He's never been in that position before, so I tried to cover up, tried to settle and put him behind horses but he pulled me so hard. At some point I had to let him go."

Right: First time by in the Haskell Invitational