The $300,000 Gotham Stakes (G3) is the first major New York prep for the Kentucky Derby, and is worth 50 points to the winner as part of the Kentucky Derby Championship Series. Conditions on Long Island were typical for early March, with mostly cloudy skies and temperatures in the high 30's, and the main track rated fast. A field of 9 three-year-olds contested this 1 mile trip around one turn of the main track, with Breeders' Cup Juvenile (G1) 9th place finisher Free Drop Billy sent off as the 8-5 favorite off his second place finish in the Holy Bull (G2). In to challenge him included 11-4 second choice Firenze Fire, 2nd in the Withers (G3) and 7-2 third choice Enticed, 4th in the Holy Bull. 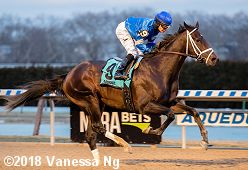 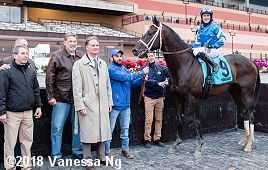 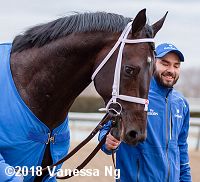 Left: Enticed in the winner's circle. Winning trainer Kiaran McLaughlin said, "It worked out great. Junior rode a great race. The 'clean-faced' plan worked out well. It was a great run and everything went perfect. We'll talk to Jimmy Bell and hopefully look at the Wood Memorial. I've got to talk to Jimmy about bringing him back (to Palm Meadows) and train and then fly him back for the Wood Memorial. He did well down here in Florida."

Right: Enticed heads back to the barn after the race. Jimmy Bell of owner Godolphin said, "You come back with high expectations over the winter and wanting to get off to a good start. We came out with more questions than answers in the Holy Bull. We'd like to say we can draw a line through it, but today impressive. You have to make your own way around there and he really needed to show us something today which obviously did in fine colors. He was very professional and we're very pleased. Still learning, he's a big boy, but this is the time of the year you start graduating and he probably made it to his next level. We'll certainly sit down and assess where we'll run next. He certainly enjoys New York." 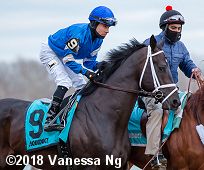 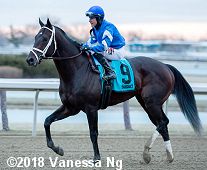 Left: Enticed heads in the post parade. Winning jockey Junior Alvarado said, "He broke good. I wanted to make sure to be a little close, but I felt the first part of the race we were going a little fast for the way the track was playing today. I wanted to make sure I kept him clear on the outside, I didn't want to get him in trouble at all because he's a horse that takes a while to get going. As soon as we turned for home, I knew it was just a matter of time when he switched leads for him to give me that next gear. As soon as he started moving along again he was much the best horse today."

Right: Enticed returns after the race. 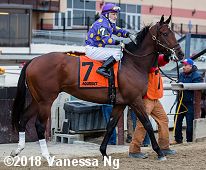 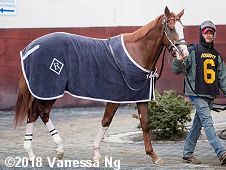 Left: Second place finisher Old Time Revival heads out to the track before the race. Trainer Kenneth Decker said, "That was his race. You have to let him run his race and let him get out there and get comfortable. We tried to rate him a couple of races back and he just showed us that he can get out there and get his pace. He's going to keep getting better and we'll just keep stretching him out. He handles all the challenges and he's just been a nice colt to work with."

Right: Third place finisher and beaten favorite Free Drop Billy in the paddock. Trainer Dale Romans said, "We got 10 points today. If he belongs, we'll have enough points to get there. Right now, that should be enough. He still has to come back and run well next time. I think he ran a clean trip. There was some good things to see, but I wanted him to win. I thought he would win. He ran in the end away from (Firenze Fire) down the lane. That was good and he kept on going. Looked like he galloped out strong. Two turns would probably be better. We'll take him back to Florida and probably go to the Blue Grass. He's already a Grade 1 winner there, but we'll go from there."


Immediately before the Gotham, a field of 9 older horses contested the $200,000 Tom Fool Handicap (G3) over 6 furlongs on the main track. Skyler's Scramjet was sent off as the 5-2 favorite off 2 allowance wins, over 7-2 Great Stuff, winner of the Toboggan (G3), and 15-4 third choice Do Share, winner of the Gravesend.

Jockey Andre Worrie sent 11-1 Green Gratto to the lead from the rail through fractions of 22.47 and 46.55 while pressed by Skyler's Scramjet and stalked by 13-1 Classy Class. Entering the stretch Green Gratto tired badly allowing Skyler's Scramjet and jockey Trevor McCarthy to open up a 4 length lead in midstretch through 5f in 58.69. Do Share, last early, swept 7 wide for the drive but came up short as Skyler's Scramjet cruised to a 1 1/2 length win in 1:11.38. It was another 3 lengths back to Great Stuff third. 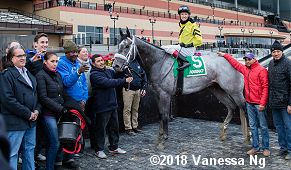 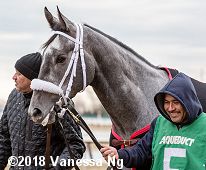 Left: Skyler's Scramjet in the winner's circle. Winning trainer Michelle Nevin said, "Trevor did a great job. Smart move just sitting off (Green Gratto) He had plenty horse when he asked him in the upper stretch to finish. We'll see how he comes out of this race and from there decide where we go next. He certainly ran huge today so that's encouraging."

Right: Skyler's Scramjet comes over from the barns before the race. Winning jockey Trevor McCarthy said, "I kind of just left him out there, and I knew what Green Gratto wanted to do so I wasn't really going to go out of my way to really chase him or anything like that so I just got him to relax and when he made that move, and he opened up a couple turning for home I was like wow, they're really going to have to catch him so I was really impressed by him." 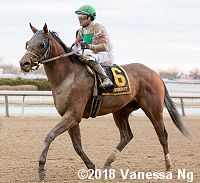 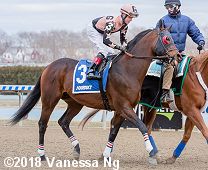 Left: Second place finisher Do Share returns after the race. Jockey Junior Alvarado said, "He broke good. The first part of the race, he was too far back - more than I would have wanted, but there was nothing I could do. I tried to rush him a little bit but he just fell all the way back at the beginning. He finished very strong, he just had too much to do, especially the way the track is playing. It was nearly impossible to win a race like that. It was a good effort and he was still strong to get second."


The $150,000 Heavenly Prize Invitational featured a field of 5 older fillies and mares also going 1 mile on the main track. Interborough winner Divine Miss Grey was the 11-10 favorite over 2-1 Holiday Disguise, winner of the Biogio's Rose, and 3-1 Highway Star, 11th in the Breeders' Cup Filly and Mare Sprint (G1). 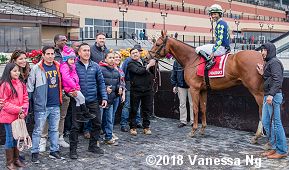 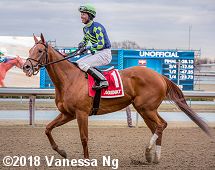 Left: Divine Miss Grey in the winner's circle. Winning trainer Danny Gargan said, "She kind of stumbled at the start and had to rush up, but once she was there, she inserted herself and controlled the speed, but she's really turning into a nice horse, and I'm just lucky to have her at the right time. She's fast and I want her to stay that way. You never take it away from them if they have it. I think she's a little better when she's in front. She gets more confidence, she gets loose, I was happy to see those scratches. I thought she'd chase. I thought it was an impressive performance. We've been lucky enough to have a great claim. It's great to see horses that come out of claiming races winning stakes in back-to-back races at Aqueduct. That helps the game a lot."

Right: Divine Miss Grey returns after the race. Winning jockey Kendrick Carmouche said, "We broke a step slow and, after that, the next couple of jumps I squeezed her and she put in some run. I just let her relax from there and the whole way you could feel her striding so perfect. At the half-mile pole, she even wanted to go even more. I just wanted to sit as long as I can, because I figured the two horses that were going to close were Highway Star and Holiday Disguise. I heard Holiday Disguise coming, but my filly was ready to go at all points." 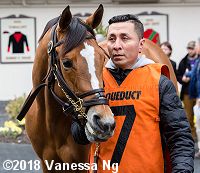 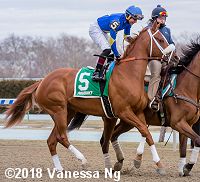 Left: Second place finisher Holiday Disguise in the paddock. Trainer Linda Rice said, "It was a good effort, we're just a little regretful that there was nobody to press the filly on the front-end. But we lost to a top filly in a top form. But we're happy with her performance. She's come back well. We can't complain. She's pretty versatile. I think she'd be good at 7f, but at a mile, she's fine. At 1 1/8 and two turns, that's unknown, but we'll find out soon."


Kicking off the stakes quartet was the $150,000 Stymie Stakes for older horses going 1 mile on the main track. Cigar Mile (G1) 7th place finisher and Toboggan (G3) runner-up Vulcan's Forge was sent off as the 7-4 favorite in the field of 7 over 2-1 Harlan Punch, winner of 2 straight in allowance company, and 5-1 Securitiz, an allowance winner last out.

Jockey Rafael Hernandez sent 12-1 Hit It Once More to the lead exiting the chute through fractions of 23.79 and 47.52 while pressed by Harlan Punch and stalked by 13-1 Backsideofthemoon. On the turn, jockey Dylan Davis moved Harlan Punch out 4 wide for room as she swept to the lead through 3/4 in 1:12.82 and 7/8 in 1:25.13. Under a handride Harlan Punch drew off to win by 7 lengths over Backsideofthemoon in 1:38.03. It was another 3 lengths back to Hit It Once More third, while favorite Vulcan's Forge checked in 6th. 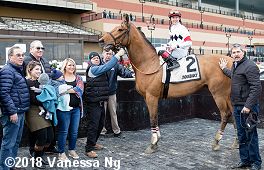 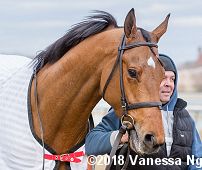 Left: Harlan Punch in the winner's circle. Winning trainer David Jacobson said, "Once in a while you get lucky, He's been training very well, and I knew if I can just get him running, and get him in the groove, and the races fall in the right spots, and the races go, and those kind of things, that we can get him going good. Now he's home free. We might run him next Saturday in Maryland, 1 1/8 mile (Harrison E. Johnson Memorial Stakes at Laurel Park). We're pointing for it, and again it'll be up to him, and it's how he comes out of the race, but the way he ran though, he didn't even run today; he didn't run last week, and he didn't run today. We might not have seen the real Harlan's Punch yet."

Right: Harlan Punch cheads back to the barn after the race. Wining jockey Dylan Davis said, "I just played off the break. I saw Rafael (Hernandez) was very aggressive with Hit It Once More, so I just let him do his own thing. Once I come to the outside, he just got into his own stride and he took it all for himself. I didn't really like the pressure early, so I really wanted to go outside. Once he gets outside, he gets into his own stride and he knows what he's got to do." 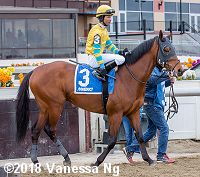 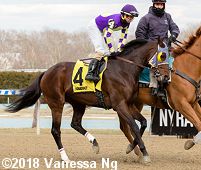 Right: Third place finisher Hit It Once More in the post parade. The Gary Sciacca trainee improved his record to 6 wins, 2 seconds, and 4 thirds in 25 starts, earning $509,642 for owner Yellow Moon Stable. 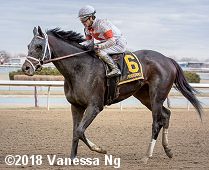 Sixth place finisher and beaten favorite Vulcan's Forge returns after the race. The Todd Pletcher trainee has a record of 4 wins, 2 seconds, and 4 thirds in 17 starts, earning $266,083 for owners William and Corinne Heiligbrodt and Team Valor International.