The feature race at Belmont Park on Saturday was the $700,000 Man o'War Stakes (G1), a 1 3/8 mile inner turf contest for older horses. Conditions were chilly for mid May on Long Island, with overcast skies and temperatures in the mid 60's, with the main track fast and the turf courses firm. Pan American Stakes (G2) winner Focus Group was sent off as the lukewarm 11-4 favorite in the field of 9. In to challenge him included 3-1 second choice Magic Wand, 5th in the Dubai Sheema Classic (G1), and 9-2 third choice Zulu Alpha, 3rd in the Elkhorn (G2). 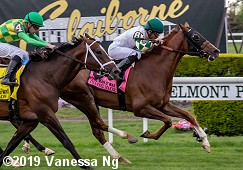 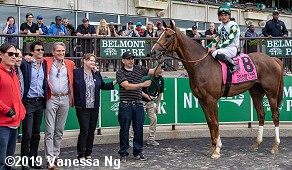 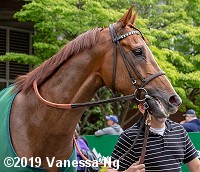 Left: Channel Maker in the winner's circle. Winning co-owner Randy Hill said, "I always thought the horse could go to the front or lay off it. He has tactical speed and there was speed in the race today. Joel rode a perfect race and was right where he needed to be. The horse bounced back off of two subpar performances. At the end of 2018 he was probably one of the fastest turf horses in America and that's when I bought into him. I think he's back. He ran a perfect race today. What can you say? It's my first Grade 1 after 22 years."

Right: Channel Maker heads back to the barns after the race. 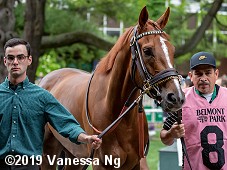 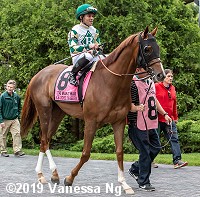 Left: Channel Maker in the paddock.

Right: Channel Maker heads out to the track. Winning jockey Joel Rosario said, "He's a good horse and runs hard all the time. I'm glad we got the money today. I thought [Hunting Horn] around the last turn might keep going, but I thought he was going too fast for the distance and the last half-furlong would be tough to get. I felt confident, and [Channel Maker] is the kind of horse that has a good, strong stride. The more you ride him, the more he gives to you." 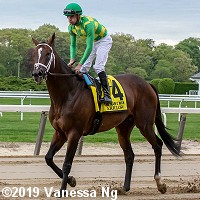 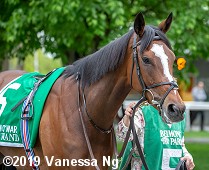 Left: Second place finisher Arklow returns after the race. Jockey Florent Geroux said, "I'm heartbroken. He ran too good to lose. He closed strong and galloped out amazingly. We were worried about his fitness level since he hadn't raced this year, but he was ready. An amazing race it was just too bad. The good thing is we have a fresh horse for this year and hopefully we can win a big one with him."

Right: Third place finisher Magic Wand in the paddock. Jockey Wayne Lordan said, "I traveled well. I was down on the inside and we had a real good gallop. I picked up off of the last turn. I kept going and I didn't feel that I had any excuse. I think she ran a very solid race." 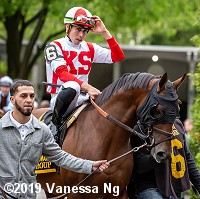 Sixth place finisher and beaten favorite Focus Group heads out to the track. The Chad Brown trainee has a record of 5 wins, 0 seconds, and 3 thirds in 13 starts, earning $458,164 for owners Klaravich Stables and William Lawrence.


The $200,000 Beaugay Stakes (G3) featured a field of 6 older fillies and mares going 1 1/16 miles on the inner turf course. Prix de l'Opera (G1) third place finisher Homerique was sent off as the 4-5 favorite over 2-1 Competitionofideas, winner of the American Oaks (G1), and 5-1 Andina Del Sur, 3rd in the Sand Springs.

Jockey Eric Cancel sent 15-2 Chipolata to the lead exiting the chute through slow fractions of 26.87, 52.86, and 1:16.92 while pressed by 29-1 Matty's Magnum and stalked by Competitionofideas. Turning for home Chipolata continued to lead through 1 mile in 1:39.22 but Homerique, last early under Irad Ortiz Jr., came out 4 wide and rallied to win by 1/2 a length over Competitionofideas in 1:44.76. It was another 2 1/2 lengths back to Chipolata third. 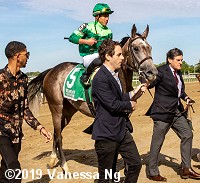 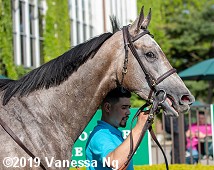 Left: Homerique heads to the winner's circle. Winning owner Peter Brant said, "She ran against the best in Europe. Even when getting in trouble, she was always right there. She's a classy kind of filly that you want to see run. We were concerned that she might have been one work shy of a race. Chad (Brown, trainer) didn't want to go into the New York (Stakes) fresh going 1 1/4, so he decided to use this race and she overcame it and won. If she comes out of the race in good order and Chad keeps it in his plan, we'll be there."

Right: Homerique heads back to the barn after the race. Winning jockey Irad Ortiz Jr. said, "For the first time in the country, that was impressive. She's a nice filly. She did everything right. There wasn't too much speed or too much pace in the race, so I knew it probably wouldn't a problem with her because even if she doesn't break that good, she was going to be close to the pace because they'll go slow. She finishes [strong]. I think when she goes a little longer, she's going to be better." 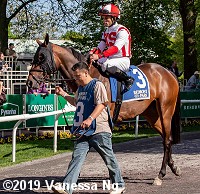 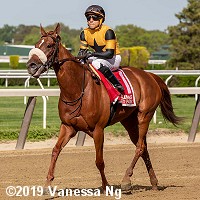 Left: Second place finisher Competitionofideas in the paddock before the race. Jockey Joel Rosario said, "It was a good trip. I saved ground and went on, but the winner was very good. On paper, there was no speed, that's why I was closer today. She came running at the end, but the other filly was better today."