The highlight of the Gulfstream Park meeting for Triple Crown season is the $1 million Xpressbet Florida Derby (G1), celebrating its 68th renewal and a major prep for the Kentucky Derby worth 100 points to the winner as part of the Kentucky Derby Championship Series. "It was a special day," said Gulfstream Park General Manager Bill Badgett. "The crowd was great, the performances by our human and equine athletes was incredible, and the energy throughout our facility was fantastic. While we close our Championship Meet Sunday, we're very much looking forward to our Spring and Summer Meet with some great racing and fantastic events."

Conditions were excellent at the Hallandale Beach oval, with cloudy skies and temperatures in the high 70's, with the main track fast and the turf going firm. A field of 11 three-year-olds contested this 1 1/8 mile trip on Saturday afternoon, one complete lap of the main track, wih Fountain of Youth (G2) 4th place finisher Hidden Scroll sent off as the 9-5 favorite. In to challenge him included 3-1 second choice Bourbon War, 2nd in the Fountain of Youth, and 7-2 third choice Code of Honor, winner of the Fountain of Youth.

Jockey Luis Saez sent 9-2 fourth choice Maximum Security to the lead first time by and he set fractions of 24.42, 48.98, and 1:12.90 while pressed by 71-1 Bodexpress and stalked by 37-1 Union's Destiny and Hidden Scroll. Entering the stretch, Maximum Security opened up by 3 lengths through 1 mile in 1:36.34. Bodexpress continued to give chase to no avail as Maximum Security cruised the rest of the way to win by 3 1/2 lengths in 1:48.86. It was another 3 1/4 lengths back to late-running Code of Honor third, while Hidden Scroll tired late to finish 6th. 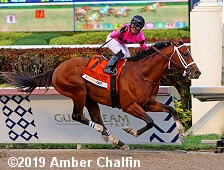 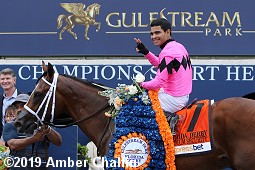 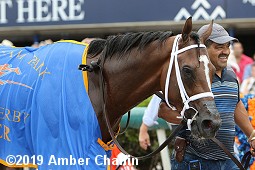 Left: Maximum Security in the winners circle. Winning trainer Jason Servis said, "The plan was not to go to the lead. I talked to Luis about it. I didn't want to over-read the race. Luis agreed that there was going to be a couple speed horses that might not be as good as a Derby horse, so we were really thinking that we were going to be laying third. At the end of the day I told Luis, 'Look, he's yours. He breaks, and you ride him however you want.' I worked in the jock's room for 20 years, and if I heard anything I heard jockeys say, 'If this guy would have left me alone I could have won this race for him.' I just wanted to stay out of Luis' way. It was his decision 100 percent. They went slow early, and the rest is history."

Right: Maximum Security heads back to the barn. 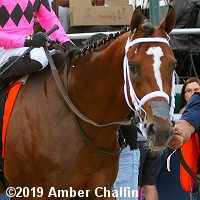 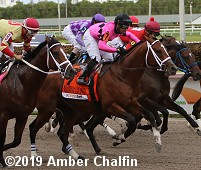 Left: Maximum Security in the paddock before the race. Servis added, "(Owners Gary and Mary West) got some really good managers and we'll see what they think they want to do. They've got that horse Game Winner, so I don't know what we'll decide. I guess I have to cancel my fishing trip in May."

Right: Maximum Security shortly after the start. Winning jockey Luis Saez said, "It was beautiful. He broke so perfect and I just took it. He was traveling beautiful, and when he came to the half-mile pole and you feel the pressure I knew I had a lot of horse and in the stretch he just took off. My plan was if [Hidden Scroll] or somebody else took the lead I'm going to sit because I don't want to make the race for somebody else. He took it so easy, so I just went with it." 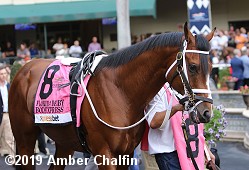 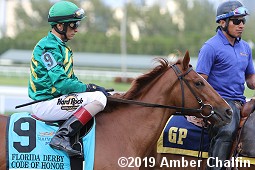 Left: Second place finisher Bodexpress in the paddock before the race. Jockey Nik Juarez said, "It was a huge effort in Bodexpress. I really liked him going into the race and he impressed me the way he ran last time. He's a young horse that can take dirt and when he finishes, he gives it all he has. Today he did the same exact thing, we just didn't have enough pace – it was just me and Luis,"

Right: Third place finisher Code of Honor in the post parade. Trainer Shug McGaughey said, "I thought we were done in the turn and he kind of kept going. I think he tried to get him going early because he could see what was going on. It just didn't work out. I'm not overly disappointed with the way he ran. We'll see how he comes out of it and go from there." 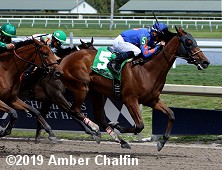 The distaff counterpart to the Florida Derby is the $250,000 Gulfstream Park Oaks (G2) at 1 1/16 miles, worth 100 points to the winner as part of the Kentucky Oaks Championship Series. Dunbar Road was sent off as the 6-5 favorite in the field of 6 off an 8 3/4 length debut win at Gulfstream. In to challenger her included 9-5 second choice Point of Honor, winner of the Suncoast at Tampa Bay, and 3-1 third choice Cookie Dough, 2nd in the Davona Dale (G2). 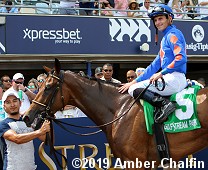 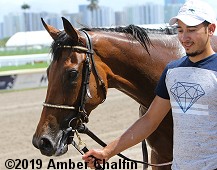 Left: Champagne Anyone in the winner's circle. Winning trainer Ian Wilkes said, "I think the blinkers made her more tractable in the race. She's a filly who doesn't like Chris to ask her to be in the race. I had to do something to where she took Chris into the race. I wasn't worried where she was today. It didn't mean that I need to be on the lead. It didn't mean I had to be second. I left it up to Chris to be where I wanted to be. That's the idea with the blinkers – to get her to travel more and not dislike what Chris was doing on her."

Right: Champagne Anyone heads back to the barns. Winning jockey Chris Landeros said, "They put blinkers on her and we anticipated being a little bit more aggressive with her instead of falling out. I got her into a gear early and she went along beautifully today. She's so naturally gifted. She still doesn't know when to completely lay it down. But, today's a big step forward and I think the best is yet to come for her." 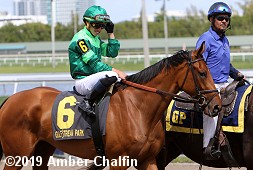 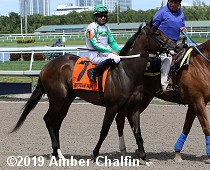 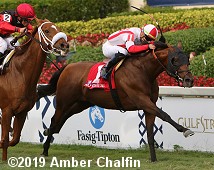 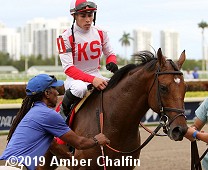 Immediately before the Florida Derby, a field of 9 older horses went 1 1/2 miles on the turf in the $250,000 Pan American Stakes (G2). Pattison Canadian International (G1) third place finisher Focus Group was sent off as the 9-5 favorite over 4-1 Soglio, 2nd in the W.L. McKnight (G3), and 5-1 Bigger Picture, winner of the John B. Connally (G3) at Sam Houston.

Jockey John Velazquez sent 13-2 Village King to the lead down the back and first time by through slow fractions of 24.93, 51.62, and 1:18.37 while pressed by 41-1 Salute the Colonel and stalked by 11-2 fourth choic Canessar. Turning for home, Canessar gained the lead through 10f in 2:07.49 before tiring. Focus Group, 5th early under Irad Ortiz Jr., saved ground the whole way, took over late and outfinished late-running 10-1 Melmich in a duel for the win by a nose in 2:30.03. It was a length back to Village King third.

Winning trainer Chad Brown said, "I'm really proud of this horse. He got a great trip on the inside. He saved all the ground. I thought he was a couple works short. I was trying to get a race into the horse with the Man o'War in mind up in New York. It worked out. I thought he'd be a little short to win. But he got a great trip. The trip he got from Irad was the difference." Jockey Irad Ortiz Jr. added, "I got a perfect trip, I saved all the ground I could. [Village King] got out a little bit, so I was a little lucky I got through there, which was probably the key for us. Javier had to check a little bit, because he had a horse there and that's why I won the race. We got lucky we got the win. He's a nice horse who always tries, from this race I think he'll improve." 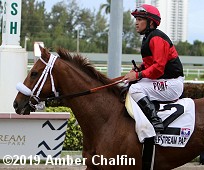 Second place finisher Melmich returns after the race. The Kevin Attard trainee improved his record to 17 wins, 16 seconds, and 5 thirds in 45 starts, earning $1,117,511 for owners Stephen Chesney and Cory Hoffman. 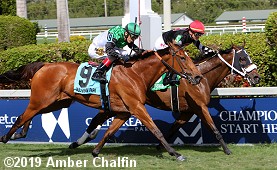 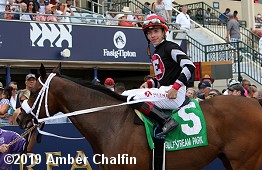 Winning trainer Kelly Breen said, "I think she's deserved it and we'll have a party in Louisville. A great stretch duel. She's just a super filly. She's into her own right now." Jockey Tyler Gaffalione added, "She just kept fighting all the way to the wire and gave everything she had. Every time a horse got close, she gave me another surge." 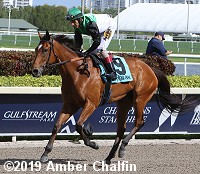 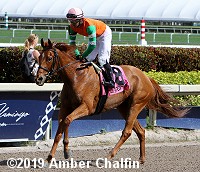