The highlight of the Gulfstream Park meeting is the $1 million Besilu Stables Florida Derby (G1), a major prep for the Kentucky Derby. A field of 10 three-year-olds contested this 1 1/8 mile trip on Saturday afternoon before 20,382 fans under clear skies and temperatures in the mid 70's, with 100 "Road to the Kentucky Derby" points to the winner. As expected, Gulfstream Park Derby and Holy Bull (G2) winner Itsmyluckyday was sent off as the 9-5 favorite over 2-1 Shanghai Bobby, the juvenile champion who was 2nd in the Holy Bull, and 3-1 third choice Orb, winner of the Fountain of Youth (G2). 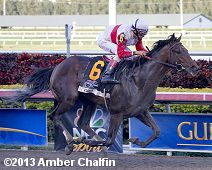 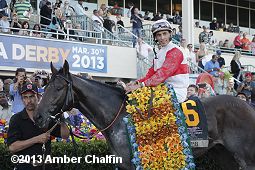 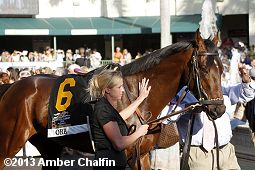 Left: Orb in the winner's circle. Trainer Shug McGaughey, celebrating his first Florida Derby said, "The Derby is my dream, but we never tried to overdo it. Hopefully, this is the one who can take us there. Johnny did a good job getting him in position. I got a little nervous on the turn when it looked like he backed up a little bit, but he switched on his right lead and came with his run. I do think he beat a nice horse that finished second."

Right: Orb in the paddock before the race. Jockey John Velazquez said, "Once we did that and I asked him he responded right away. It was impressive. Once I asked him he was there for me and I couldn't ask for a better feeling than that." 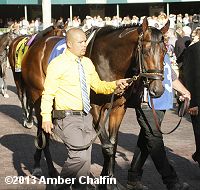 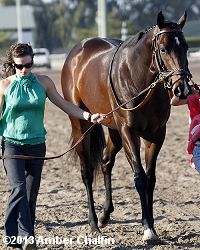 Left: Second place finisher and beaten favorite Itsmyluckyday in the paddock before the race. Trainer Eddie Plesa said, "Orb ran a fantastic race. We finished second and it gets us in the (Kentucky) Derby. That was our goal. Naturally we would have loved to have won but we'll come back and see what happens next time. Am I disappointed? Yes, but I'm also proud of him too. He's done everything we've asked."

Right: Third place finisher Merit Man heads to the paddock. Trainer Bob Hess said, "He ran a super race and got a Hall of Fame ride from Kent Desormeaux, but just got beat. I have a lot of options, just not Kentucky Derby options." 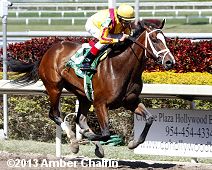 The distaff counterpart to the Florida Derby is the $300,000 Gulfstream Oaks (G2) also run at 1 1/8 miles. Dreaming of Julia was sent off as the 8-5 favorite in the field of 6 off a second place finish in the Davona Dale. In to challenge her included 9-5 second choice and Davona Dale winner Live Lively, and 5-2 third choice Emollient, an allowance winner after finishing second in the Demoiselle (G2). Live Lively went to a clear lead through fractions of 23.43, 47.18, and 1:11.16 while stalked by Dreaming of Julia. Into the lane, Dreaming of Julia accelerated past the pacesetter, sprinting away to a 21 3/4 win in 1:48.97. It was another 4 lengths from Live Lively back to 8-1 Call the Moon third. 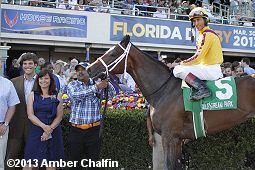 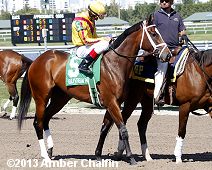 Left: Dreaming of Julia in the winner's circle. Trainer Todd Pletcher said, "We felt she was training as well as ever and she was coming up to it in good order. But, honestly, I can't say I was expecting that kind of victory. That was pretty impressive. She seemed like she's trained up to that (last) race well and she ran a good race last time, but obviously, today, she was impressive," Pletcher said. "I felt better that we were able to put ourselves in a good position pretty comfortably and had our sights on (Live Lively). She was travelling really well; she was good today."

Right: Dreaming of Julia in the post parade. Jockey John Velazquez said, "She was a superior horse today. We just wanted to get there, sit comfortably and let her know what she needed to do. We planned the same thing last time. We didn't want to overdo it and go on with the other horses. At one point, I had to put a little pressure on. The difference this time was she was much more ready than the first time she ran, which made it easier." 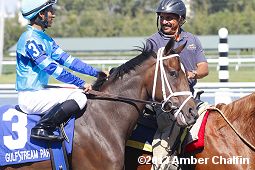 Second place finisher Live Lively in the post parade. Trainer Mark Hennig said, "I'm disappointed, I saw Dreaming of Julia in the paddock and she looked more composed than she did last time. I thought she'd step up. Ours was a bit more stirred up going to the gate. I don't really have an explanation, we just got out run. It was not her best effort." 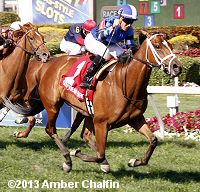 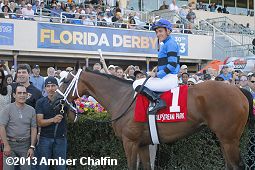 Winning trainer Michelle Nihei said, "Her running style allows her to do so much because she's rideable. She's the kind of horse that likes to take her time. She doesn't need to be rushed. Anything at a mile and an eighth or more was going to suit her perfectly."

Jockey Luis Contreras added, "She kicked very hard at the end. She was so nice and relaxed pretty much all the way. I was in a great position behind the leaders. At the time I asked her at the 1/4 pole she just exploded." 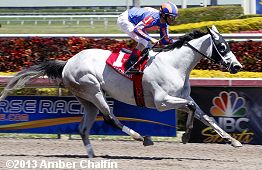 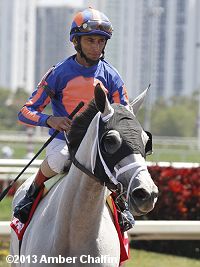 Winning jockey John Velazquez said, "We knew there wasn't a lot of speed in there except for Successful Song. It seemed like (Successful Song) didn't want to be on the lead, so it was pretty easy."

Winning trainer Todd Pletcher said, "We were also looking at a race at Aqueduct for Ciao Bella (Ruffian Handicap next Saturday). It was a tough call. I talked it over with Mr. Tabor and decided to keep her here. She was two-for-two over the main track. With the slow fraction Johnny was able to dictate the race. (Authenticity) ran a good race to be second after getting bottled up behind the slow pace. I haven't got any specific plans for them right now." 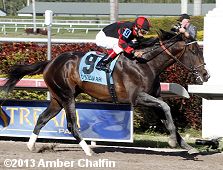 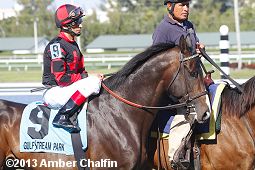 Ken McCarthy, assistant to trainer Bill Mott said, It was a little rough for us (Mott stable) watching Dubai earlier and then some of our other horses here today didn't perform up to expectations. We've always thought a lot of this horse. Johnny let him run a little bit out of the gate early to get position for the first turn and then he went on from there to beat some very nice, more seasoned horses like (Orb). I think he'll probably go to Kentucky from here." 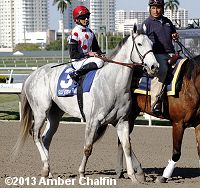 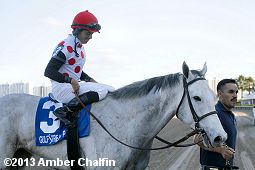 Winning jockey Jose Lezcano added, "My instructions were to let him break, go inside, save some ground and wait to make my move at the 3/8 and it worked perfectly. I saw there was a lot of speed in the race and it worked out great for us." 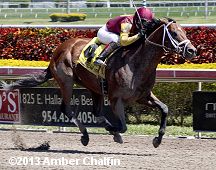 Winning trainer Todd Pletcher said, "I think he ran out of training last time. At the 1/8 pole the layoff showed up on him. I felt like he might rebound from that with a race under his belt he might be a little stronger. We know he loves Gulfstream; it's nice to get him back in the winner's circle."