The highlight of the Gulfstream Park meeting is the $1 million Florida Derby (G1), a major prep for the Kentucky Derby. A field of 8 three-year-olds contested this 1 1/8 mile trip, one lap of the main track in Hallandale Beach, with Soldat sent off as the 3-2 favorite off his win in the Fountain of Youth (G2), the local prep for this event. In to challenge him included 3-1 second choice Dialed In, winner of the Holy Bull (G3) two starts back but second in an allowance last out, and 7-2 third choice To Honor and Serve, third in the Fountain of Youth after winning the Remsen (G2) and Nashua (G2) at Aqueduct.

Jockey Jesus Castanon sent 69-1 longest shot Shackleford to the lead and he set quick fractions of 23.30, 46.35, and 1:10.63 while being pressed by To Honor and Serve to his inside. Entering the stretch, Shackleford shook off To Honor and Serve and opened up a 2 length lead through 1 mile in 1:36.38. Dialed In, unhurried and last for 5/8 mile, came out for room and closed with a rush to nail the pacesetter by a head in a time of 1:50.07 over the fast track. It was a long 6 3/4 lengths back to To Honor and Serve third, while favorite Soldat was 5th. 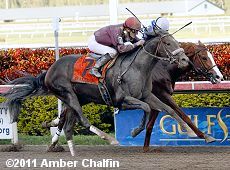 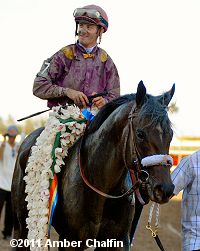 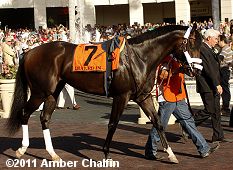 Left: Dialed In after winning the Florida Derby. Winning trainer Nick Zito said, "I haven't felt this emotional in 20 years since Strike the Gold. I've been around long enough to know how special he is with just four races, from one 6 1/2 furlong maiden race as a 2-year-old. It was a gamble with the speed bias, but I knew he was capable of running this type of race. Once he got in position to rally I felt good." Winning owner Robert LaPenta said, "We've been to the (Kentucky) Derby several times and look forward to doing it again. We almost won it with Ice Box, but it does feel special to finish second. The goal is the Derby, but it certainly is nice to consider (Frank) Stronach's $5.5 million bonus (if he wins the Preakness)." Zito and LaPenta, who won last year with Ice Box, are the first owner-trainer team to win consecutive Florida Derbies since Jimmy Jones and Calumet Farm in 1957-58.

Right: Dialed In in the paddock before the race. Winning jockey Julien Leparoux said, "It was a solid pace and that definitely helped. I just left him alone out of the gate and started to catch up around the second turn. I think his last race really helped him today. I loved his last race. It was a very good learning race. He learned to run between horses and take dirt in his face, and it all paid off today." 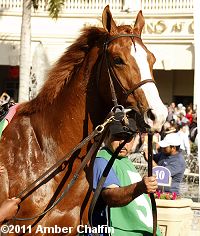 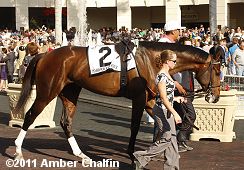 Left: Second place finisher Shackleford before the race. His trainer Dale Romans said, "That's a real tough beat. He ran super. I'm very proud of him. If $200,000 is enough to get into the Derby, I think we'll have to go. He's a horse that keeps improving. We drew a line in his last race. We had no excuse for it. He came back and showed us he's better than his last race showed. He just dug back in and galloped out real strong. He's doing everything right."

Right: Third place finisher To Honor and Serve before the race. His trainer Bill Mott said, "He looked like he was a little anxious on the backside. It looked like they set honest fractions. He was actually in the game when they turned for home today. It was a better race than last time by quite a bit. But we still need to improve." 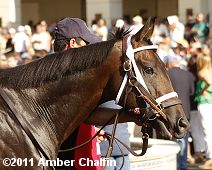 Fifth place finisher and beaten favorite Soldat before the race. His trainer Kiaran McLaughlin said, "Alan (Garcia, jockey) said he just didn't fire his A race today. He didn't have much horse when he pulled him out. He took a lot of dirt, but you're going to have to take dirt, so we'll regroup and look him over." 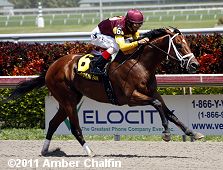 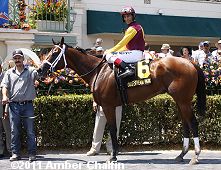 The other race on the card with possible Triple Crown implications was the $150,000 Swale Stakes (G2) for 3-year-olds sprinting 7 furlongs. 10-1 Razmataz opened a clear lead on the rail exiting the chute and set fractions of 23.13 and 46.42 while being stalked by 2-5 favorite Travelin Man. Into the stretch, Travelin Man moved up to take over the lead from the tiring pacesetter through 3/4 in 1:10.15, and drew off to win by 2 lengths over late-running 5-2 Indiano in 1:21.94. It was just a head back to 9-1 Little Drama third.

Winning trainer Todd Pletcher said, "He relaxed really well. We got a much more favorable post position (than in the Hutcheson). He was down inside last time and under a lot of pressure. He responded really well today. The good thing about him, he's got such a great disposition, he'll rate kindly and we could stretch him out." 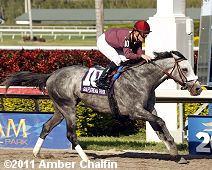 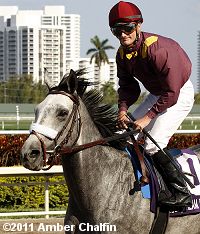 Winning trainer Nick Zito said, "He was in California with Doug O'Neill and came up with some issues after the last time he ran at Del Mar. He came to me and we tried to get him started at Calder, which is a tough track to come back on and he didn't run well. We talked about it after that race and Mr. LaPenta said to go ahead and drop him in ($20,000 claiming). We were on pins and needles that we might lose him, but he won and nobody took him. He's just gone from one step to the next and here we are today. He's (by) Birdstone, so that makes his success even more emotional for me." 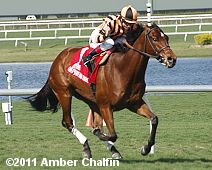 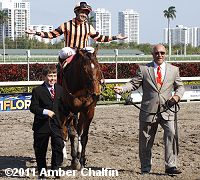 Winning trainer Dale Romans said, "I've never seen him get tired. Even though he didn't win the 1 1/8-mile race (Gulfstream Turf Handicap), he only got beat 2 lengths and that was a grade I. He has been just super. He came to me in great condition. It's pretty special for him to win three graded stakes at the meet." He may go next in the Woodford Reserve Turf Classic at Churchill Downs.

Winning jockey Kent Desormeaux said, "She froze going into the gate, but that's all it was. It's not a simple thing to explain, but hopefully it's something she gets over. The last couple of times we tried to hold her off the lead and I was a little disappointed with the way she ran, so I thought maybe we should employ a different tactic today and go for the lead. Thankfully that change in the plan was successful. At no point late was I worried that the other horses were going to come get her, she still had plenty left at the finish." 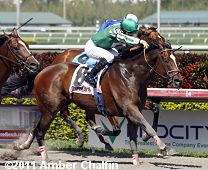 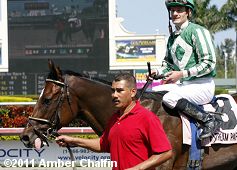 With the win, the 9-5 favorite Capt. Candyman Can, trained by Ian Wilkes, improved his record to 8 wins, 2 seconds, and 1 third in 14 starts, earning $732,223 for owners Rosemary Rauch and David Zell. 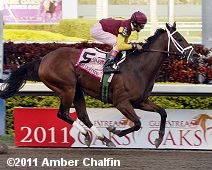 The Florida Derby on Sunday is the highlight of the Gulfstream Park meeting. On Saturday, its filly counterpart, the $300,000 Gulfstream Oaks (G2), was contested at the Hallandale Beach oval, with a field of 7 three-year-old fillies going 1 1/18 miles on the main track prepping for the Kentucky Oaks. R Heat Lightning was sent off as the 3-5 favorite off her 7 length romp in the Davona Dale (G2) last out. In to challenge her included 8-5 second choice It's Tricky, undefeated in 3 starts including the Busher at Aqueduct, and 11-1 Island School, third in an allowance last out and making her stakes debut.

Jockey Paco Lopez sent 18-1 Triune to the lead soon after the start and she set quick fractions of 23.06, 46.32, and 1:10.97 over the fast track while being stalked by 50-1 Salary Drive and 28-1 Kindersley. Entering the stretch, the fast pace took its toll as all three tired, allowing R Heat Lightning, who sat fourth behind them , to take over the lead at the 3/16 pole. R Heat Lightning opened up by 2 1/2 lengths at the 1/8 pole through 1 mile in 1:36.50. Island School, who was unhurried early, closed from last but was no match for R Heat Lightning who cruised past the winning post 8 1/4 lengths in front in 1:49.27. It was a long 4 lengths back to Salary Drive third. 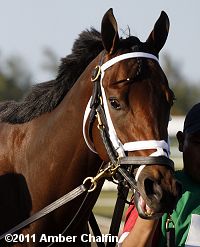 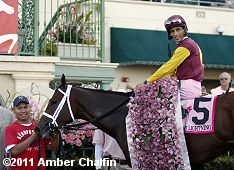 R Heat Lightning in the winner's circle. Winning jockey John Velazquez said, "She relaxed really well again today.  The race set up perfectly. They were going fast enough so we could track the pace and have something to run at.  She was so relaxed and had plenty to finish.  She made my day."

Winning trainer Todd Pletcher said, "She's starting to relax more in her races. She's not an easy filly to ride, but Johnny has gotten to know her and what to do. You're always a little concerned when they have to go wide in the first turn like that, but she was in the clear, which is the important thing. I didn't think she got quite the respect she deserved after winning the Spinaway and finishing second in the Breeders' Cup last year, but now I think she'll be recognized at the head of the class." 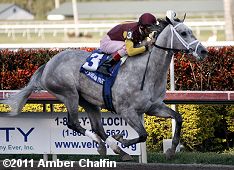 The undercard feature on Gulfstream Oaks day was the $150,000 Rampart Stakes (G3) for older fillies and mares also going 1 1/8 miles on the main track. Awesome Maria was the 9-10 choice in the field of 6 off her win in the Sabin (G3) last out. Also in the field included 7-5 second choice Unrivaled Belle, unraced since winning the Breeders' Cup Ladies' Classic (G1) at Churchill, and 8-1 third choice Persuading, switching back to dirt after finishing third in the Suwanee River (G3) and second in the Honey Fox (G3) over the Gulfstream turf.

Persuading went to the front early under jockey Javier Castellano and she set early fractions of 23.61, 46.80, and 1:10.85 over the fast track while being stalked by Unrivaled Belle and Awesome Maria. Entering the stretch, Persuading and Unrivaled Belle both tired, allowing Awesome Maria to inherit the lead at the 3/16. She drew off the length of the stretch to win by 8 lengths over 25-1 longest shot Successful Song in 1:49.09. It was another 2 1/4 lengths back to Unrivaled Belle third. 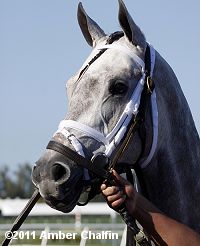 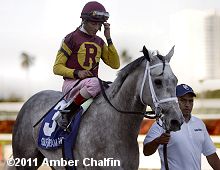 Awesome Maria heads to the winner's circle. Winning jockey John Velazquez said, "She was really good today.  Around the first turn she relaxed really well for me and then was there for me when I needed her. There was no question in my mind about the extra distance going into this race.  The only question was would she relax, which she did."

Winning trainer Todd Pletcher said, "She just reached a new level in her training since we got her down here this winter. We'll point her to the Ogden Phipps, but she might run in the Shuvee before that."