The $1 million Florida Derby (G1) is one of the major preps for the Kentucky Derby. Despite it being moved to 5 weeks out from the first Saturday in May two years ago, it is still considered a key race, with last year's winner Barbaro winning the Kentucky Derby in his next start. In this year's edition, a field of nine three-year-olds contested the 1 1/8 miles on the main track at Gulfstream Park, with Fountain of Youth winner Scat Daddy sent off as the 2-1 favorite over 3-1 Notional, winner of the Risen Star in his last start. Also in the field was 7-2 third choice Stormello, second in the Fountain of Youth by a nose to Scat Daddy, and 9-2 fourth choice Adore the Gold, winner of the Swale but a close fourth in the Fountain of Youth.

Stormello sprinted away clear at the break and saved ground around both turns through fractions of 23.05, 46.78, and 1:10.82, while being stalked by Adore the Gold and Scat Daddy to his outside. Entering the stretch, Edgar Prado asked Scat Daddy for run and got it, as the favorite moved up and collared Stormello at the 1/4 pole. Stormello weakened through the stretch to an eventual fourth place finish, but Notional, who had raced in fifth early, swung out five wide on the turn and put in his rally. However, he was no match for Scat Daddy who easily held him off by 1 1/2 lengths at the finish in a running time of 1:49.00. It was just 3/4 lengths back from Notional to 9-1 fifth choice Chelokee, who suffered traffic trouble in midstretch and was unable to rally.
Results Chart from Equibase.

Tristan Barry, assistant to winning trainer Todd Pletcher said, "It was a little disappointing (for the stable) in Dubai, but this more than makes up for it. It really went exactly as we planned. When they broke from the gate, Edgar was able to hold him off the speed, and from there, the race was his." 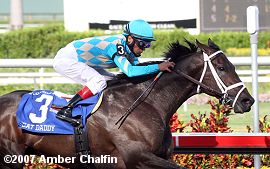 A close-up of Scat Daddy at the finish. Winning owner Michael Tabor said, "This is very special because he is a son of Johannesburg (co-owned by Tabor). He was very special to us and this one was obviously very special as well. Now it's on to Kentucky (Derby). We know the five weeks leading up to it can work after last year (Barbaro won both races), and we look forward to it." 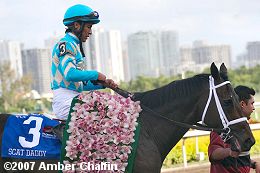 Scat Daddy with the Florida Derby orchids. Winning jockey Edgar Prado said, "He's got an easy running style. There was a good pace in the race and I was able to sit outside, right behind the leaders. When I called on him, he came running. He broke good and settled into his stride galloping along. When I pushed the pedal, he was ready to go. He was looking around a little today, but nobody would have beaten him today. I did my homework and figured out what was going to be the best style of running in this race today." 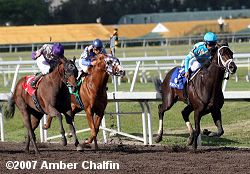 In the stretch with Scat Daddy out front, second place finisher Notional on the outside, and fourth place finisher Stormello on the inside. Doug O'Neill, trainer of runner-up Notional said, "I thought he ran dynamite. These kind of races, with Scat Daddy and Stormello and Chelokee, it's a great field of horses. We were just outrun by Scat Daddy. You could run this race 10 times, and have four or five different winners. I hope he comes out of it in good shape, and we get a rematch with Scat Daddy and the others on the first Saturday in May." Jockey Robby Albarado added, "He was digging in at the 1/8 pole and galloped out after the wire pretty good. I feel with a longer stretch, he'll be right up there with the top 3-year-olds." 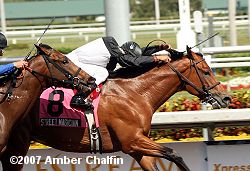 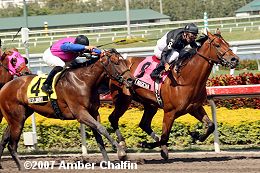 Nearing the finish in the Aventura with Street Magician out front and second place finisher Yesbyjimminy right behind. Winning trainer Michael Trombetta said, "I was privileged last year to be a part of the (Kentucky) Derby and Preakness with Sweetnorthernsaint, and we all got to see what Bernardini did with a similar background (lightly-raced) to this colt. This one is a little late to come around, but we're going to take it one step at a time, see how her comes out of it, head to the Withers (Aqueduct on Apr. 28), and go from there. He was slow to mature, but he's really changed a lot this winter." Jockey Rafael Bejarano added "My horse has a lot of speed and the 7 horse (Blue Bullet) does too. We broke good and I wanted to see where we were at, see if the seven went on. We sat there comfortably, and let the seven go on. When the running started, he pulled away and finished good." 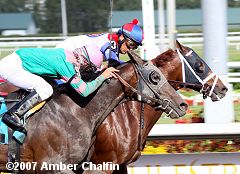 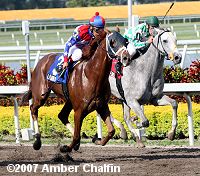 The tight photo finish in the Skip Away with A.P. Arrow on the inside and Rehoboth on the outside. Winning owner Michael Paulson said, "We've known all along he's a quality horse, but to be a closer on the dirt on certain tracks can be tough. He can run all day, and he's got some good speed, but he's a grinder and a closer. In the Donn Handicap (third), everybody talked about Invasor and saying how he got cut off. Well look at A.P. Arrow, he got cut off too and had to go wide. We'll talk to Todd (Pletcher) and look at either the Stephen Foster (Churchill Downs on June 16) or the Suburban (Belmont on June 30)." 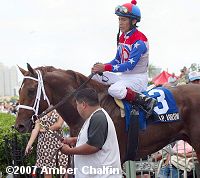 A.P. Arrow heads for the winner's circle. Anthony Sciametta, assistant to winning trainer Todd Pletcher said, "It was a good spot for him. He's run hard the last couple of races." Jockey Edgar Prado added, "He broke really good, but I knew the inside horse (Political Force) had speed, so I just wanted to stay within striking distance. He is like riding a bike, you have to keep pedaling the whole time. They told me to ride him with confidence, and I did, and he got the job done." 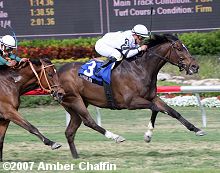 There were two turf stakes races on the Florida Derby undercard, each a Grade 3 for $150,000 at the marathon distance of 1 1/2 miles. The Pan American Handicap saw 9-5 favorite Jambalaya run to expectation, settling in midpack off the pace of 25-1 Fri Guy through fractions of 24.41, 49.52, 1:14.36, and 1:38.56, before unleashing his run around the far turn. Through the long stretch drive he wore down the pacesetter and held off the late-running 5-1 Hotstufanthensome to prevail by just 1/2 a length in 2:24.98 over the firm course. It was a long 2 3/4 lengths back to Fri Guy in third.
Results Chart from Equibase. 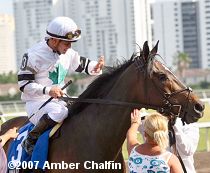 Jockey Javier Castellano celebrates aboard Jambalaya after winning the Pan American. Winning trainer and co-owner Catherine Day Phillips said, "He's a very easy horse to train. He relaxes, and he's so easy on himself. After his last race we gave him a couple of weeks off. His first breeze back was easy and we just kept adding a little bit more each time, and he came into this in great shape. It's obvious he gets along beautifully with Javier (Castellano). He'll run on just about any type of turf, but we just had some ridiculously soft turf last year in Canada. He loves it down here and thrives. We'll take him back to Ocala and then back to Canada." Jockey Javier Castellano added, "I had a beautiful trip today. I had the inside advantage with the post position and was able to stay on the rail and save ground. All I had to do was swing around when it was time. I had plenty of horse because I was able to stay off of the pace. He had a lot left today." 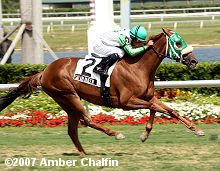 Seven older fillies and mares entered the Orchid Handicap. Completing the sweep of winning favorites on the card, 6-5 Safari Queen saved ground along the rail the whole way in mid pack while chasing the pace of 23-1 Moon Berry of 23.95, 48.41, and 1:13.29. Angling out three wide on the third and last turn, she took command at the 1/8 pole and drew away late to win by 1 1/2 lengths over 4-1 Almonsoon in a time of 2:25.17. It was a length back to 7-1 La Dolce Vita in third.
Results Chart from Equibase. 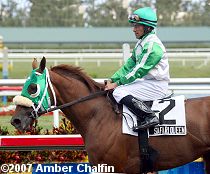 Safari Queen and Chris DeCarlo return after winning the Orchid. Anthony Sciametta, assistant to winning trainer Todd Pletcher said, "Todd had her well prepared for this race. She was training awfully good going into it. It looks like he has got this filly right, right now. You can see it in her last three races. We were expecting a big effort and we got it." Jockey Chris DeCarlo added, "When they learn how to relax (going 1 1/2 miles) you can bide your time. She broke sharp and I was able to sit behind the leaders. I angled out at the top of the stretch, and I knew she was ready to take off when I asked her to."