The $1 million Florida Derby (G1) is the key race for horses using the Florida route along the Triple Crown trail. A field of 12 three-year-olds went to post in this 1 1/8 mile trip around the main track at Gulfstream Park, with Big Brown sent off as the 3-2 favorite, making his stakes debut after winning his first two career starts. In to challenge the Richard Dutrow Jr. trainee were 3-1 second choice Elysium Fields, second in the Fountain of Youth in his last start, and 7-1 third choice Fierce Wind, winner of three straight including the Sam F. Davis at Tampa Bay.

Jockey Kent Desormeaux sent Big Brown to the front right away, having to quickly angle in from the far outside post during the short run to the first turn, getting to the rail after clearing Fierce Wind who broke well from the rail. Big Brown set a quick pace of 22.76, 45.83, and 1:10.08 while 27-1 Nistle's Crunch and Fierce Wind stalked him down the backstretch. Turning for home, Desormeaux asked Big Brown for run and the favorite opened up through the stretch. 16-1 Smooth Air rallied from 6th but was no match for Big Brown who cruised under the line 5 lengths ahead in 1:48.16 over the fast main track, just 0.37 seconds off the track record and the fastest Florida Derby since 1996. It was another 7 1/2 lengths back to 13-1 Tomcito in third, while Fierce Wind faded badly in the stretch and finished 10th. 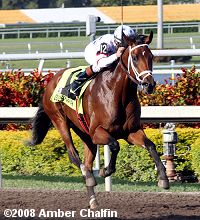 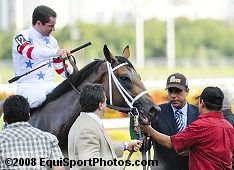 Big Brown returns after the race. His jockey Kent Desormeaux said, "My plan was not to get on the lead, but rather to get close enough to the rail so as not to get caught wide. Riding him was like bounding through a meadow. He just galloped around. When a horse sets fractions like that and still tells me that he's got more, and that the other horses can't get to him, that's something special. He's a major talent; possibly the best horse I've ridden. I thought that after the first time I rode him. I'd have to say that he's my (Kentucky) Derby horse." 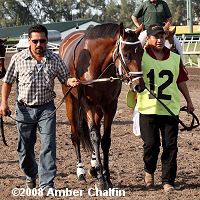 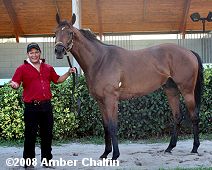 Left: Big Brown walks over from the barn before the race. His trainer Richard Dutrow Jr said, "With a horse like that, you just try to stay out of his way. With all his talent all I have to do is let him run. He came out of the gate like we wanted him to. I loved being on the outside. It eliminated our chance of getting in trouble. Going into the race, the only way we cold get beat was if we got in trouble. In the first turn I knew it was over. I knew the horses in this race could not catch him. I don't see any 3-year-old that can beat him anywhere in the world and I've watched them all. I totally misjudged him before his last race. I didn't know he was that good."

Right: Big Brown in the barn after the race. 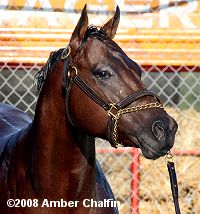 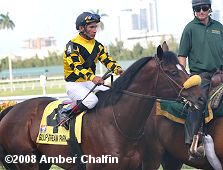 Left: Second place finisher Smooth Air back at the barn after the race. His jockey Manoel Cruz said, "He held good position. When I moved, he responded for me, but not sufficient enough to catch (Big Brown). I'm really happy for the horse, and that we finished second, but the most important thing is that the horse comes back healthy."

Right: Third place finisher Tomcito in the post parade. His jockey Jorge Chavez said, "He ran a really nice race. He got a little tired at the end, but he hadn't run in a while. I think he has a lot of promise, and I think he wants more distance to his races. The track he ran at in Peru (Hipodromo de Monte Rico) is a big track, a lot like Belmont." 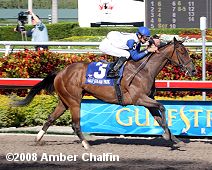 The filly counterpart to the Florida Derby is the $150,000 Bonnie Miss Stakes (G2) for 3-year-old fillies. Just six went to post in this 1 1/8 mile main track event, with Highest Class sent off as the 8-5 favorite off her third place efforts in the Tiffany Lass and Silverbulletday, over 5-2 second choice Backseat Rhythm, third in the Breeders' Cup Juvenile Fillies then third in an allowance last out. 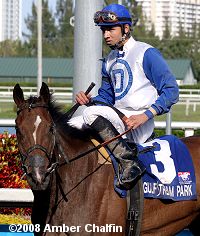 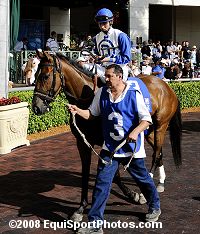 Left: Shes All Eltish returns after the race. Her jockey Eddie Castro said, "She stayed behind the speed. She was very relaxed on the backside. I had a lot of horse at the 3/8 pole. She ran off at the 1/4 pole. I've ridden her on turf and dirt and I like her better on dirt."

Right: Shes All Eltish in the paddock before the race. Her trainer Marty Wolfson said, "My whole concern was her moving too soon. She really did it easy today when she opened up like that. She needs horses to run at. I don't know what's next. She's nominated for the Kentucky Oaks, but I don't want to go there. There's too much commotion. I'm grateful to the owners. They let me buy her privately as a yearling for $22,000." 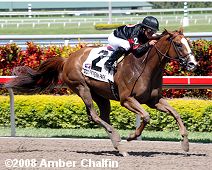 The $200,000 Shirley Jones Handicap (G2) features older fillies and mares sprinting 7 furlongs on the main track. Just six entered, with Herecomesthebride and First Lady winner Sugar Swirl sent off as the 7-10 favorite over 7-2 Shaggy Mane, fifth in the Sunshine Millions Filly and Mare Sprint in her last start.

Sugar Swirl ran to expectation, sitting in midpack fourth down the backstretch off the pace set by Shaggy Mane and 11-1 Featherbed, then entering the stretch three-wide, she passed the tiring pacesetters and drew away to win by 5 1/2 lengths over 9-2 third choice Baroness Thatcher in 1:22.57. It was another 2 3/4 lengths back to Shaggy Mane third.
Results Chart from DRF. 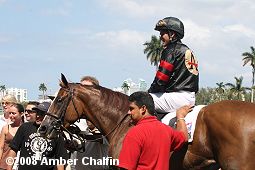 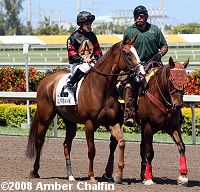 Left: Sugar Swirl in the winner's circle. Winning trainer Brian Lynch said, "There was some thought about going on to the Humana Distaff (Churchill Downs), but I don't know if that's still in the cards. She'll need a little break at some point, but the main objective for her will be the new Breeders' Cup sprint for fillies & mares. This distance (seven furlongs) is probably her best. I don't know whether she'll go back to Bobby (Frankel) now. I'm just delighted to have had her for these races this winter."

Right: Sugar Swirl in the post parade. Winning jockey Javier Castellano said, "This is a great filly. She'll do whatever you want. She was on her toes today. She broke well and settled in behind the leaders. The three horses went to the lead and they looked like they wanted to kill each other. I had a lot of horse turning for home, so I swung out alongside of them to get out of their way because they went so fast early that sooner or later I knew they would come back to me. I rode her with a lot of patience and a lot of confidence." 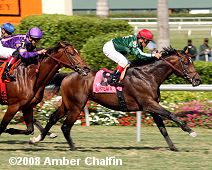 The $150,000 Bulleit Bourbon Palm Beach Stakes (G3) is for 3-year-olds going 1 1/8 miles on the turf. A field of eleven went to the gate here, with European invader Sporting Art sent off as the 3-1 favorite after finishing second by a neck in his U.S. debut last time out, over 7-2 Celestial Comet, an allowance winner in his last start after finishing 8th in the Tropical Park Derby.

Sporting Art did not disappoiont, rating off the pace set by 21-1 longshot Wise Answer of 45.91 and 1:09.45, then taking the far turn four wide, rallying well through the stretch to get the lead inside the 1/8 pole and was all out to hold off late- charging 12-1 Flying Dismount by just a neck in 1:45.98 over the firm course. It was another 3/4 length back to 5-1 Moral Compass third.
Results Chart from DRF. 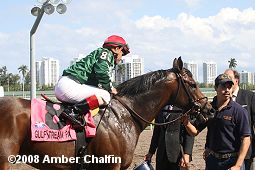 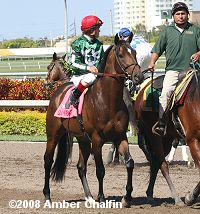 Left: Sporting Art after the race. Winning trainer Christophe Clement said, "He's a nice horse and he's trained like a nice horse. I will try him on the Polytrack next time, maybe in the Lexington (at Keeneland). It's a very good spot. He came to the States in early December. The final time is remarkable. These are 3-year-olds."

Right: Sporting Art in the post parade. Winning jockey Javier Castellano said, "I rode him in his first start here in this country. Today he broke very sharp. He was supposed to come from behind, but he was a little closer to the pace. Christophe (Clement) told me not to hesitate on him and to ride him with confidence. He said he if he was close not to worry. I knew he had the race won because at the three-eighths pole I had a lot of horse. When I asked him, he took off."

Thanks to Amber Chalfin and EquiSportPhotos.com for the photographs.