The top three-year-olds of the east coast gathered at Gulfstream Park on Saturday for the $1 million Grade 1 Florida Derby, historically a key race for Triple Crown hopefuls. Ten went to post, with Read the Footnotes sent off as the even-money favorite.

62-1 longshot Frisky Spider was loose on the lead for the first half mile in 47.05, with 4-1 second choice Value Plus stalking him three wide around the first turn. Down the backstretch, Value Plus took command as Frisky Spider dropped out of contention, and led the field around the far turn through 3/4 in 1:11.54. Favorite Read the Footnotes saved ground along the rail under Jerry Bailey back in eighth, and, turning for home, drew even with Value Plus but had nothing left for the stretch. Down the lane, 37-1 longshot Friends Lake, who had saved ground in sixth early on and swung out wide on the turn, rallied under the whip of Richard Migliore, catching Value Plus inside the 1/16 pole and prevailed by 3/4 length in 1:51.38 for the 1 1/8 miles. It was another 3/4 length back to late-running 5-1 shot The Cliff's Edge, and 2 1/2 back from him to the favorite Read the Footnotes. Results Chart

Winning trainer John Kimmel said, "It's so tough to keep coming back and holding good form. If he can run a race like this off an eight week layoff we might think about not running him again until the Kentucky Derby."

Winning jockey Richard Migliore said, "I was pretty confident from about the half-mile when he started pulling me. About the 3/16 pole I opted to ease him out to the middle of the track to get clear. He's got that great, big A.P. Indy stride and he picked it up from there. He was very difficult last time, and he's come a long way." 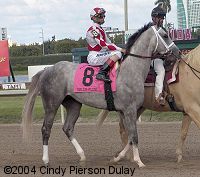 Second place finisher Value Plus in the post parade. His trainer Todd Pletcher said, "He just got a little tired at the eighth pole. That's probably because I only had one seven-eighths race into him and two five-eighths breezes since then. I had hoped we could win it today, but I think we established ourselves." 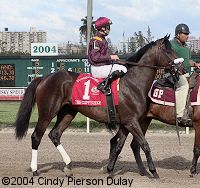 Third place finisher The Cliff's Edge in the post parade. His trainer Nick Zito said, "It's a little bittersweet because I really think we could have won. This horse just always runs a good race. He's a legit horse. He runs all day. He will run a mile and a quarter. He just needs a break. Maybe down the road we'll get that break." 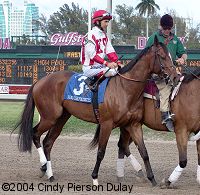 Rick Violette, trainer of beaten favorite Read The Footnotes, said, "I have to think his race in the Fountain of Youth did him in today. As much as we tried to overcome it, it obviously didn't work. At the eighth pole it sort of hit him in the face."

Immediately after the Florida Derby was another race for top three-year-olds, the Grade 3 Swale Stakes, a $150,000 event over seven furlongs. Only five went to post here, with Eurosilver the 11-10 favorite. However, 4-1 shot Wynn Dot Comma got the lead midway around the turn, drew clear by mid stretch, and easily held off the on-rushing favorite to win by a head in 1:22.87. It was 4 1/4 lengths back to 14-1 shot Dashboard Drummer in third. Results Chart

Winning trainer Martin Wolfson said, "Last time was a horrible trip. He was checked three times and he was out of the race. He likes to be in the race all the way, so today when I saw him on top of Chapel Royal I knew we had that one beat." 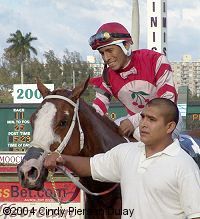 Jockey Edgar Prado celebrates his 5,000th career victory aboard Wynn Dot Comma. Prado said of the race itself, "The way I figured it in this race, I had two horses to beat. One was a sprinter (Chapel Royal) and one was a closer (Eurosilver). Everything worked out perfect." There was a special ceremony in the winner's circle to commemorate the 5,000th win. 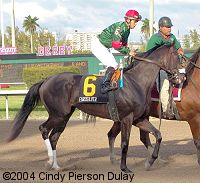 Second place finisher and post time favorite Eurosilver in the post parade. His trainer Nick Zito said, "He is going to fit really perfect in there, he loves the two turns. We got the two races in him, now we've got to go for the gusto." Next out should be the Blue Grass.

Earlier on the card was another seven-furlong event, the Grade 2 Forward Gal Stakes for three-year-old fillies. 1-5 favorite Madcap Escapade was off a step slower than the rest but quickly got into stride and led every call, winning by 4 3/4 lengths in 1:22.97 over 7-2 second choice La Reina. Winning trainer Frank Brothers said, "She's a very exciting filly ... the most talented filly I've ever trained. When she goes farther, she'll be in front, the question is if she keeps rolling. She has a chance to stretch out." Jockey Jerry Bailey added, "I was merely a good passenger, that's all I was. She did hop out of the gate a little bit, but by the time she hits the ground the second time she's in full flight. I didn't even come close to dropping her head today." Results Chart

Capping off Gulfstream's biggest raceday of the season was the Grade 3 Skip Away Handicap for older horses going 1 1/16 miles on the main track. 6-1 shot Newfoundland stalked the pace in third through 3/4 in 1:12.06, then got to the lead and won after a prolonged stretch duel with 15-1 shot Supah Blitz. Supah Blitz drew even at the 1/16 pole but was outfinished in the final strides, losing by 1/2 a length, in a final time of 1:43.26. It was another 2 1/4 lengths back to 7-5 favorite Bowman's Band in third. Results Chart