The Florida Derby is the first Grade 1 and the first $1 million Triple Crown prep race of the year. A field of 11 went to post in this 1 1/8 mile event around the Gulfstream Park main track, with the undefeated Barbaro sent off as the 8-5 favorite, off wins in the Holy Bull, Tropical Park Derby, and Laurel Futurity. However, he was making his first career start on a fast dirt track, having raced on turf and sloppy tracks only. In to challenge were 4-1 second choice Flashy Bull, third in the Fountain of Youth last time out, and 9-2 third choice Sunriver, an allowance winner last out and seventh to Barbaro in the Holy Bull 2 races back.

When the gate opened, jockey Mark Guidry guided 6-1 fourth choice Sharp Humor to the front and over to the rail to save ground, and he set a quick pace of 23.45, 47.35 and 1:11.37 while 1 1/2 lengths clear of the favorite Barbaro in second. Barbaro had bobbled at the start and jockey Edgar Prado had to hustle him up to contest the pace. Turning for home, Prado asked Barbaro for his best stride as the favorite quickly closed the gap to draw even with Sharp Humor with a furlong to go, after a mile in 1:36.08. The pair battled head to head through the late until Barbaro finally wore down Sharp Humor to prevail by just 1/2 a length, in a time of 1:49.01 for the 1 1/8 miles over the fast track, extending his undefeated streak to five. It was 3 lengths back to late-closing Sunriver in third, and 2 1/4 more to 35-1 outsider Sam's Ace in fourth. Flashy Bull suffered traffic trouble at the end of the clubhouse turn and despite a good stalking trip, faltered in the stretch to finish seventh.
Results Chart from DRF. 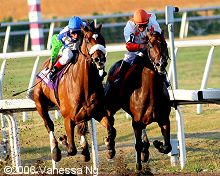 The stretch duel between Barbaro and Sharp Humor was really thrilling. Sharp Humor refused to give up but Barbaro refused to lose and finally got the edge. 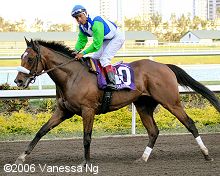 Barbaro returns after the race. Winning jockey Edgar Prado said, "I saw Sharp Humor break sharp, so I just followed him. (Barbaro) was pretty much in control of the race. So far this is my Derby horse. We'll see how he comes back over the next couple of days and make a decision from there." 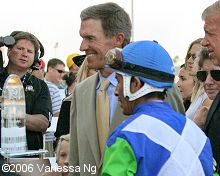 Winning trainer Michael Matz and jockey Edgar Prado in the winner's circle. Matz said, "He was ready to run today. I'm no more concerned now (going into the Derby) than I was about the eight-week layoff (since the Holy Bull). I think he's a good horse. He's done everything we've asked of him. We'll keep him here about a week or so, and then probably go to Keeneland, probably work once there, and then go to Churchill. Edgar said he got to acting a little goofy with that other horse eyeballing him, but this was the first time he really had that experience." 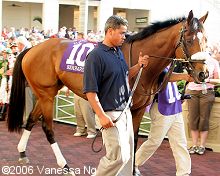 Barbaro in the paddock before the race. Ed Madden, the stable foreman for trainer Michael Matz, said on Sunday morning, "Everything is great today, and it was great before the race. This horse is just one great individual. He ate up last night, ate up great this morning, and did his thing (morning exercise routine) in the round pen this morning. We're all looking forward to the (Kentucky Derby) now." 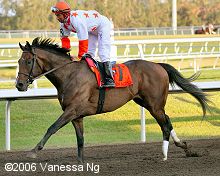 Second place finisher Sharp Humor returns after the race. His trainer Dale Romans said, "That's a nice horse that beat us. If you would have told me yesterday that I'd get beat a head, I'd be ecstatic, but my horse just fought so hard and kept looking like he was going to win. It's become a disappointment. But tomorrow I'll be ecstatic again. We're going to train him up to the Kentucky Derby." 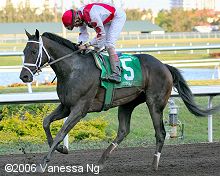 Third place finisher Sunriver returns after the race. His trainer Todd Pletcher said, "I thought he ran very well. He got shuffled going into the first turn, and that cost him a little bit of position, and then he was stuck out wide the rest of the way. But he continued to close and was still inching up at the end. We were using this as a Kentucky Derby prep. He needed to run well to go forward and I think he did that, but now it will be a question of graded stakes earnings."