Along with the Florida Derby, there were three other stakes races on the undercard that were contested on the main track. The $100,000 Skip Away Handicap saw a field of eight older horses travel 1 1/8 miles, and this race marked the return of last year's Blue Grass winner Bandini. The Todd Pletcher trainee was sent off as the overwhelming 2-5 favorite over 5-1 second choice Contante and 6-1 third choice Noble Causeway.

When the gate opened, jockey John Velazquez did not waste any time getting Bandini to his preferred spot on the lead and saving ground on the rail. 13-1 shot Whos Crying Now tried to run with Bandini through a quarter in 24.47 and a half in 48.37 but dropped out of contention at the end of the backstretch to eventually finish last. Turning for home, Bandini found his best stride and began to extend his advantage to 3 lengths with a furlong to go. 37-1 longshot We Can Seek, who had stalked the pace in fourth early, made a late move but was left with too much to do, as Bandini easily held him off by 1 1/4 lengths at the line in a time of 1:49.11 over the fast track. It was a long 5 lengths back to 30-1 shot O'Connell's in third. Noble Causeway was fourth and Contante was seventh.
Results Chart from DRF. 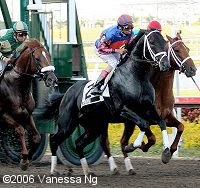 Bandini leaps out of the starting gate to win wire to wire. Winning trainer Todd Pletcher said, "This horse has matured quite a bit from last year. He's made progress every step of the way and that performance was pretty much what we were hoping for. On paper he looked like he was the controlling speed. Sometimes race don't turn out the way they look on paper, but he was able to get to the front and do what we expected. We'll point for the Met Mile That's been the plan." 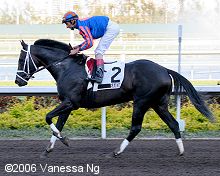 Bandini returns after the race. Winning jockey John Velazquez said, "I wanted to give him a little break the first part of it, so I gave him his head to let him get comfortable, and then when I asked him, it was all him."

The $100,000 Artax Handicap featured older horses sprinting 7 1/2 furlongs. Gygistar was sent off as the 6-5 favorite off his third place finish in the Cigar Mile. When the gate opened, 9-1 shot Auguri was off slowly but jockey Cornelio Velasquez quickly got him to the front to set a pace of 22.62 and 44.54 for the backstretch run. 10-1 shot Little Thunder stalked him just a length off the pace to the outside. Rounding the turn, jockey Clinton Potts urged Little Thunder and he responded, opening a lead of 5 lengths in mid-stretch and easily holding that lead over late-closing 11-1 shot Nightmare Affair to the line, completing the distance in a time of 1:27.97. It was a long 3 3/4 lengths back to favorite Gygistar, who raced at the back early and could only pass tiring horses for the show spot.
Results Chart from DRF. 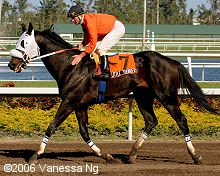 Little Thunder returns after the race. Alex Prado, assistant to winning trainer Dale Capuano said, "We found out about how much he doesn't like two turn a couple of races back. Ever since we claimed him last year, he just keeps getting better and better, and improving. His speed figure last time showed that. He's a nice horse, and he's great to work with, and this race was the payoff for our work." Jockey Clinton Potts added, "He jumped right up in the bridle. He pretty much dragged me the whole way around. That was unexpected. I can't take any credit for that, because the horse did it all himself." 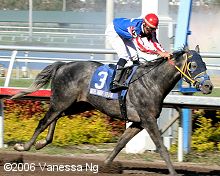 Second place finisher Nightmare Affair crosses the finish 5 lengths behind Little Thunder. He is still looking for his first win since last August. 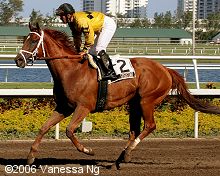 Third place finisher and beaten favorite Gygistar returns after the race. It was his first start since finishing third in the Cigar Mile last year. He was second in the Artax last year.

Kicking off the stakes action on the afternoon was the $75,000 Spectacular Bid Stakes for three-year-olds sprinting 6 1/2 furlongs. 4-5 favorite Exclusive Quality lived up to expectation, taking over on the turn after a quick quarter in 22.11 and a half in 44.46. Stretching out to a 1 1/2 length advantage with a furlong to go, he easily held off 3-1 third choice Diabolical in the final strides to prevail by just 1/2 a length in a time of 1:15.88. It was a long 4 1/2 lengths back to 5-2 second choice R Loyal Man in third.
Results Chart from DRF. 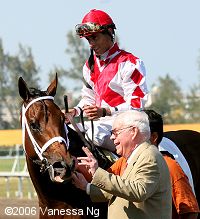 Owner Aaron U. Jones prepares to lead Exclusive Quality to the winner's circle. Winning trainer Todd Pletcher said, "He's done everything we've asked him since he came down here this winter. It was great to see him willing to put up a fight, because he had to battle a little bit early on, and still kept going." He added that Exclusive Quality would ship to Belmont and start next in the Withers or the Woody Stephens Breeders' Cup (formerly the Riva Ridge). 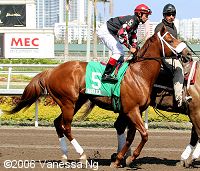 Second place finisher Diabolical in the post parade. His last two races had been on the turf and he seemed to appreciate the change back to the main track.