There were three turf stakes races on the Florida Derby undercard, featuring horses who might be on the Breeders' Cup trail later in the year. The $100,000 Orchid Handicap (G3) featured older fillies and mares also traveling 1 1/2 miles on the turf. 30-1 longshot Potra Classica got away to a clear lead and set brisk early fractions of 23.88, 1:11.71, and 1:59.76, before tiring and dropping out of contention. Even-money favorite Honey Ryder sat well off the pace in fifth early on, until asked by jockey John Velazquez while leaving the backstretch for the last time. Taking a three-wide path around the turn to pass tiring horses, Honey Ryder found her best stride at the top of the lane, as the favorite easily powered away to win by 4 lengths over 4-1 second choice Olaya in a time of 2:23.07, setting a new course record for 1 1/2 miles. It was 2 more lengths back to 6-1 shot Noble Stella in third.
Results Chart from DRF. 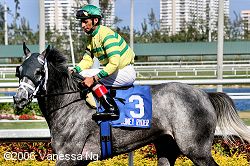 Honey Ryder returns after the race. Winning trainer Todd Pletcher said, "I think this is probably the best race she's ever run, which is saying a lot because she's been such a very good, consistent mare. It seems like the older she gets, and more mature she gets, she seems to be able to rate better and better. And that was the key to delivering this performance today." She will start next in the Bewitch Stakes at Keeneland. 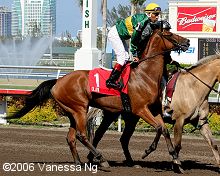 Second place finisher Olaya in the post parade. She came over from France last year and has not finished worse than second in the United States.

The $150,000 Pan American Handicap (G3) saw eight older horses travel 1 1/2 miles over the Gulfstream Park turf. 32-1 longshot Ramazutti went to the front controlled the pace with slow fractions of 24.32, 48.48, 1:13.36, and 1:38.42. However, 5-2 second choice Silver Whistle, who sat back in fourth while saving ground along the rail around all three turns, still had enough left to challenge. Swinging up along side the pacesetter on the last turn, he wore down Ramazutti through the final furlong to prevail by just a neck in a time of 2:24.35 over the firm course. It was 2 lengths back from Ramazutti to 2-1 favorite Go Deputy, who closed late and barely held off Einstein for the show spot.
Results Chart from DRF. 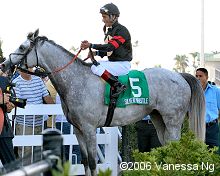 Silver Whistle in the winner's circle. Winning trainer Bill Mott said, "It took him all the way to the wire to finally win one of these. I guess he needed the extra distance. He had a nice trip inside. We knew he would be able to step up to this level of competition." Jockey Edgar Prado added, "It worked out great. I was able to stay behind the speed and bide my time. So it worked out beautiful because I was able to run down that other horse (Ramazutti) the last part of it." 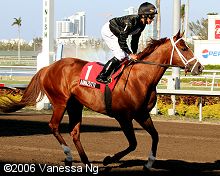 Second place finisher Ramazutti in the post parade. He was the second longest shot on the board at 32-1 coming off a 10th place finish in the Mac Diarmida Handicap last out.

The last race of the afternoon was the $75,000 Lure Stakes for older horses at 1 mile on the turf. 5-2 favorite Drum Major stalked the pace of 59-1 outsider Bob's Proud Moment through a half in 46.92, then slipped through along the inside to gain a 1 1/2 length advantage at the 1/8 pole, then easily held off 4-1 second choice Rebel Rebel to prevail by 1 3/4 lengths in a time of 1:32.67. It was another 1 1/4 lengths back to 36-1 shot Wishingitwas in third. Triple Crown veteran and 9-2 shot Sir Shackleton was unhurried early but had nothing for the stretch run, finishing sixth in the 12-horse field.
Results Chart from DRF. 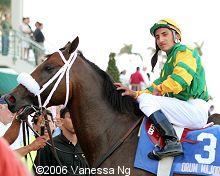 Drum Major and jockey Rafael Bejarano in the winner's circle. This was only his second start this year for the 7-year-old.