The highlight of the Gulfstream Park meeting is the $1 million Besilu Stables Florida Derby (G1), a major prep for the Kentucky Derby. A field of 8 three-year-olds contested this 1 1/8 mile trip on Saturday afternoon under cloudy skies and temperatures in the mid 80 s, with 100 "Road to the Kentucky Derby" points to the winner. Holy Bull (G2) and Nashua (G2) winner Cairo Prince was sent off as the 6-5 favorite over 3-1 second choice Constitution, making his stakes debut undefeated in 2 lifetime starts, and 4-1 third choice Wildcat Red, winner of the Hutcheson (G3) and the Fountain of Youth (G2), the major local prep for this race.

Jockey John Velazquez sent Wildcat Red to the lead first time by and he set easy fractions of 24.01, 48.19, and 1:12.00 over the fast track while stalked by 9-2 fourth choice General A Rod and Constitution. Entering the stretch, Constitution moved up to challenge Wildcat Red, setting up a duel to the line through 1 mile in 1:36.46. Constitution outfinished Wildcat Red late to win by a neck in 1:49.16. It was another 1 1/4 lengths back to General A Rod third, and another 2 1/4 back to favorite Cairo Prince fourth. 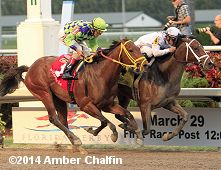 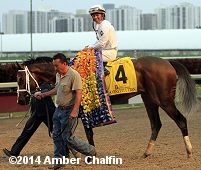 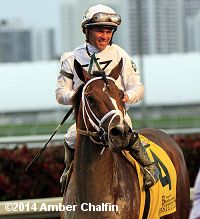 Left: Constitution heads to the winner s circle. Winning trainer Todd Pletcher said, Wildcat Red was a bit off the rail down the backside. I saw Johnny (on Wildcat Red) take a look back like he knew Javier was there, but by that point the seam was kind of open. In his first start, he didn t break well at all and he rushed up the rail. He was in a pretty long duel that day and I thought he showed that type of potential. Wildcat Red is a fighter. You know that if you get to him, you re going to have to keep working. It looked like they were both finding more and it looked like in the last 50, 60 yards he found a little more. We were maybe putting all of our eggs in one basket, but the Florida Derby was the plan that we were all comfortable with. If it happened, fine, and if it didn t, then the timing just wasn t right for him this year. Luckily for us it all fell into place."

Right: Constitution returns after the race. Winning jockey Javier Castellano said, "I took a shot (staying on the rail). It s race-riding. Sometimes you have to anticipate what s going to happen in the race and you study the jockeys. I know that Johnny (Velazquez, on Wildcat Red) isn t going to open the rail for anybody. I took a shot and his horse didn t help him much when he tried to drift a little. I cut the corner and it worked out great for me. I didn t want to get to the hole and move too soon, a premature move. My mount is a young horse and stretching out to a mile and an eighth. You want to take consideration and save something for the end. I didn t want to check and lose the race like that. I had my spot and I kept it all the way to the top of the stretch." 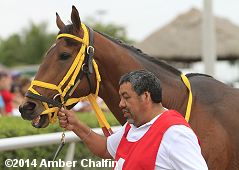 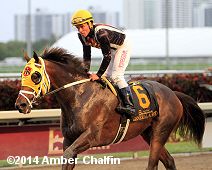 Left: Second place finisher Wildcat Red in the paddock before the race. Trainer Jose Garoffalo said, "We lost the rail at one point and Castellano was smart enough to take the rail at the top of the stretch, and that was it. It was a hell of a race. I think we re thinking seriously to go to Kentucky if the horse comes back in good shape. I m not disappointed, it was a hell of a race, he did a great job and he was himself like he usually is. We just got beat (by almost nothing). I think (Javier) Castellano (on Constitution) was very, very smart and took the rail, and that was the difference. That s why we lost the race. He never quit running."

Right: Third place finisher General a Rod returns after the race. Jockey Joel Rosario said, "It took him a little bit to keep him going and Johnny already had a good position on the outside he was coming out a little bit and I just followed him the whole way and opened up the inside a little bit and Constitution came through the rail and it was over from there. My horse ran great and tried very hard. He ran a great race. It was a little quick, but thats how it goes sometimes, I guess we were third best today." 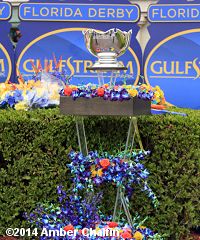 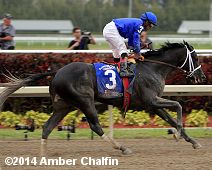 Left: Fourth place finisher and beaten favorite Cairo Prince after the finish. Jockey Luis Saez said, "I had a pretty good trip. He broke so well. We got a clear position at the 5/8 pole and then he was making his move, but when the other horses kept running, he got a little tired. He s better than that. He s a good, nice horse."

Right: The Florida Derby trophy displayed before the race. 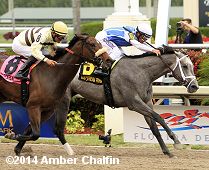 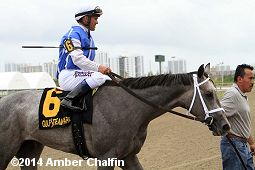 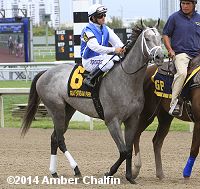 Left: In Tune heads to the winner s circle. Trainer Todd Pletcher said, "It s rare that you have one come along this quickly, a short maiden to a long a other than to a graded stakes. She stepped up in class and distance each time and passed every test, so I m very proud of her. She showed a lot of courage down the lane. We anticipated that there would be some other speed in there so we felt like with our post position (6) that we could sit off of it if we needed to. It pretty much unfolded like we thought."

Right: In Tune in the post parade. Jockey Javier Castellano said, "She s an amazing filly. She was really fighting. When she saw that other filly coming, she took off gain. She s undefeated. I give all the credit to the filly. She was stretching out today, and she was wonderful." 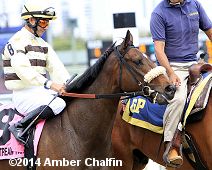 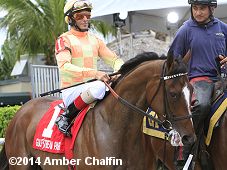 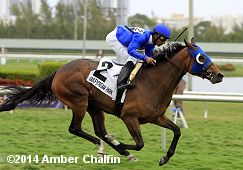 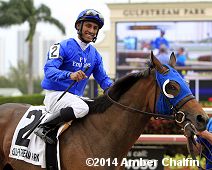 Joe Murphy, assistant to trainer Tom Albertrani said, "Tommy would be very pleased (with Anjaz). He did a great job with her, and I think she can do a little bit more. They ve been struggling with her, and it s just a relief. Everyone s overjoyed, and that s what people want. Races coming off the track and not being able to get a run and doing something in the gate, we were able to fix it. We worked hard, and it worked out. When I saw 49 I knew she d be playing with them. Rajiv held her together, and that s all we wanted to do. It worked out. I couldn t have foreseen that. I d be lying."

Jockey Rajiv Maragh added, "She broke really sharp and took me around the track very comfortably in the beginning, and I had a lot left to finish with. Once she established the lead, it was 1 1/2 miles so everyone was pretty much being patient with a long distance to go. All the horses got into a nice flow. It was a pretty steady kind of race. I was fortunate to get it easy, and I ll take it like that. It worked out pretty good." 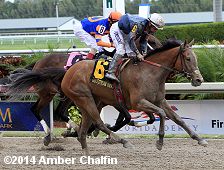 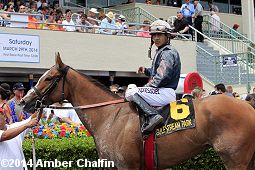 Winning jockey Paco Lopez said, "(At the top of the stretch) I had a lot of horse, and (Private Ensign) came over and forced me to come out. I put my horse outside and she came over just a little bit and I took a hold, and my filly didn t have a problem. I went right by the other horse. I told (the stewards), I didn t bump the horse. I didn t come over on the horse - you can look. I took a hold and moved her away. I didn t hit her with the whip, nothing. It didn t affect the race and I had a lot of horse."

Winning trainer Marty Wolfson said, "It was too much weight on (Devil s Cave), and I didn t think (Unlimited Budget) was going to push her like that. I claimed her for running a route on dirt. When I ran her in Tampa she got in all kinds of trouble. She should have won. Paco rode her just like I wanted, where she makes one run, 3/8 mile on the outside." 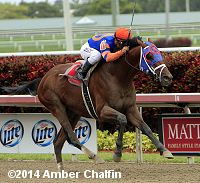 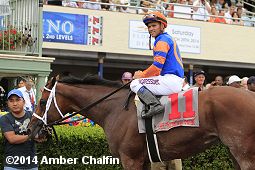 Winning jockey Javier Castellano said, "I had a beautiful trip. It worked out beautiful. On the backside, my horse kept track of the two speed horses. We had a beautiful spot and at the half-mile pole I knew I had it. I felt it, that we would win the race." Trainer Todd Pletcher added, "It worked out beautifully. He got a great trip from the outside, he was able to get over and save some ground on the first turn with a stalking position. The race I really want to get him ready for is the Brooklyn on Belmont Day. The 1 1/2 miles will suit him well. We ll probably run him somewhere in between that, but I m not sure where yet." 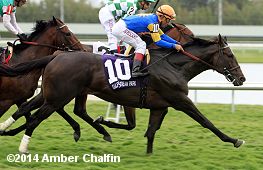 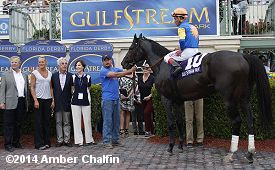 Winning trainer Bill Mott said, "At the 1/16 pole, it looked like anything could happen. It was a good race. I thought he might run well. He s had a long layoff, and this was only his second start back. I wasn t sure if he was totally there yet. But he fired well today. We thought we d probably be laying a little bit closer. I knew the horses that had speed. Of course, I took the blinkers off this horse and it probably caused him to relax a little bit more in the first part of it."

Winning jockey Joel Rosario added, "They went a little quick early and he s a big horse and broke a little slow. I just let him sit in behind horses and hoped he had something turning for home and he did." 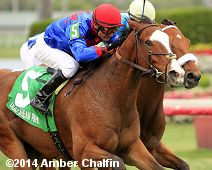 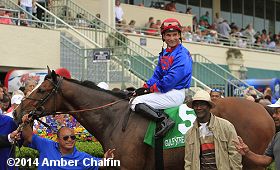 Winning trainer Manuel Azpurua said, "Going into the stretch, I told the rider, Don t give him too much, and he did a nice ride because he took care of the horse, and the horse finished strong like he always does. He s going to be a nice horse, and he showed so far that he can make it. We re going to take it easy on him now and wait for the right spot for him."

Winning jockey Alex Solis added, "I saw a lot of guys sending to the lead so I just took a hold and took back, dropped down to the rail and saved some ground. When I got to the backside, I started getting a forward position and got him going at the 3/8 pole. At the 1/4 pole I thought, I have a good chance here. He was giving his heart and down the stretch he gave even more. At the eighth pole I thought I would get there because he was really running and the other horse was stopping." 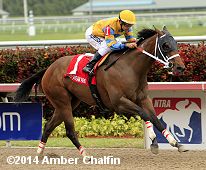 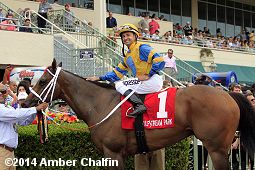 Winning trainer Joe Orseno said, "The horse always trained fast. I tried to do different things with him. I even tried to stretch him out. And then, finally, I said, He wants to be fast, so let him be fast, " Orseno said. "I trained him a little differently, changed some things that made him a little happier. He s responded beyond my belief. Off a performance like this, we have to think bigger and better. He s on his way up." Jockey Joe Bravo added, "You ve got to love him. All he does is know how to win."