The Canadian International was one of three graded stakes run on the Woodbine turf on Saturday. Due to overnight rains, the course was officially rated good, but with a 9.9 GoingStick reading, would be called "good-to-firm" in Europe. Conditions were typical for mid October in Toronto, with mostly cloudy skies and temperatures in the high 40's.

The distaff counterpart to the International is the $500,000 E.P. Taylor Stakes (G1) for older fillies and mares going 1 1/4 miles on the turf, and is the final Grade 1 race in Canada for 2018. Dance Smartly (G2) winner Santa Monica was sent off as the 5-2 favorite in the field of 9 off her second place finish in the Glens Falls (G2). In to challenge her included 7-2 second choice Pollara, winne of the Prix de Royaumont (G3) at Chantilly, and 5-1 third choice Proctor's Ledge, 6th in the Ballston Spa (G2). 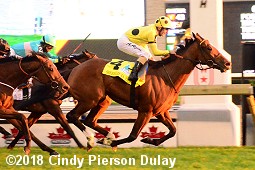 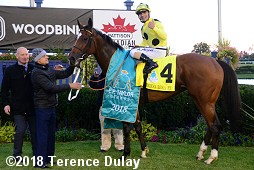 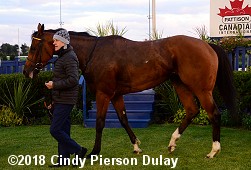 Left: Sheikha Reika in the winner's circle. Winning jockey Andrea Atzeni, who won both Grade 1 races on the card said, "It was very important for her to jump out well. It was very important for me to take a good position heading into the first corner and travel nicely. The pace was a bit slow, but it turned into a little bit of a sprint, that's why she sort of took her time to hit top gear, but when she hit top gear, she went on to win in the end. She is a big mare and the ground is probably slow, a little bit ædead' for her. She's a better filly over fast ground, but she got the job done today, which is the main thing.ö

Right: Sheikha Reika heads back to the barn. 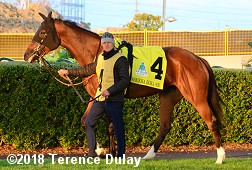 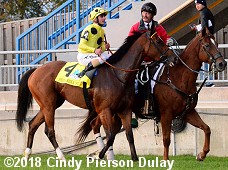 Left: Sheikha Reika in the paddock before the race.

Right: Sheikha Reika returns after the race. Mike McGowan, assistant to trainer Roger Varian said, "I think she would've won a bit more comfortable if the race had gone a bit faster. The ground was a bit loose, which doesn't suit her, she likes fast ground, so I was a bit worried because the leaders went slow enough to stay where they were. The last 50 yards, she really picked up and took off.ö 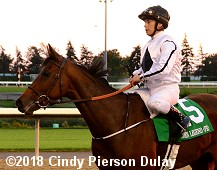 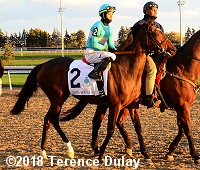 Right: Third place finisher and beaten favorite Santa Monica in the post parade. The 5-2 favorite stalked the pace under jockey Jose Ortiz but was outkicked late to finish third beaten a length. The Chad Brown trainee improved her record to 4 wins, 3 seconds, and 3 thirds in 27 starts, earning $336,304 for owners Susan Magnier, Madaket Stables, and Deron Pearson.


The first turf stakes on the card was the $250,000 Nearctic Stakes (G2) featuring top older horses sprinting 6 furlongs on the turf. Lady Alexandra was sent off as the 8-5 favorite in the field of 11 off her 9th place finish in the Presque Isle Masters (G2) after finishing a close second in the Highlander (G1). In to challenge her included 5-1 second choice Holding Gold, 4th in the Play the King (G2), and 7-1 third choice Yorkton, winner of the Bold Venture (G3).

Jockey Jesse Campbell sent Yorkton to the front through fractions of 22.31 and 45.18 while pressed by Lady Alexandra and stalked by 11-1 Hemp Hemp Hurray. Lady Alexandra tired in the stretch as Yorkton continued to lead through 5f in 56.76. However, 9-1 Hembree, 7th early under Irad Ortiz Jr., came out 3 wide for room and rallied to get up by a neck in 1:08.95. It was just a nose back to Hemp Hemp Hurray third, while favorite Lady Alexandra checked in 9th beaten 4 1/2 lengths. 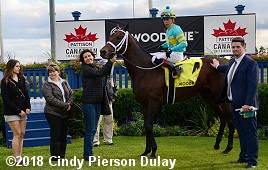 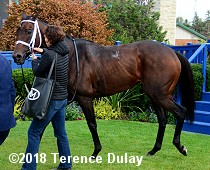 Left: Hembree in the winner's circle. Winning jockey Irad Ortiz Jr. said, "I got a good trip. Nolan told me that there was going to be some pace in front of me, so don't panic, just let him be comfortable. When I tipped him out in the stretch, he appreciated the long stretch because he was coming. He was flying home. He was pretty honest. He was coming pretty fast, so I knew he was going to get there.ö

Right: Hembree heads back to the barn after the race. Nolan Ramsey, assistant to trainer Mike Maker said, "I really like the horse. Hemp Hemp Hurray (owned by his grandparents Ken and Sarah Ramsey) may be a personal favourite, but this horse is all class, does everything right, and just makes my job very easy, so no surprise today. He handles everything and is all class, so no surprises/ Probably at the 1/4 pole Hemp Hemp Hurray really looked like the horse to beat to me, but Irad gave Hembree a great trip, had him on the outside and closed strong, so it was an exciting finish and I'm happy with the result.ö 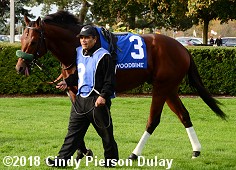 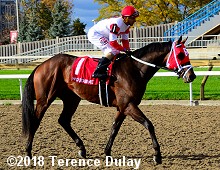 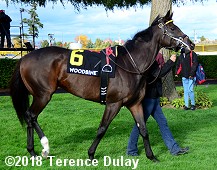 9th place finisher and beaten favorite Lady Alexandra in the paddock before the race. The Graham Motion trainee has a record of 4 wins, 1 second, and 1 third in 11 starts, earning $249,778 for owner Heider Family Stables. 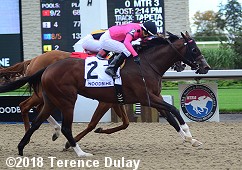 Kicking off the stakes quartet on Saturday, the $125,000 Ontario Derby (G3) featured a field of six 3-year-olds going 1 1/8 miles on the Tapeta main track. Caesars Stakes winner Mr Ritz was sent off as the 8-5 favorite over 2-1 Strike Me Down, 4th in the Queen's Plate before finishing 2nd in 2 allowance races, and 4-1 Lookin to Strike, an allowance winner after finishing 7th in the Toronto Cup.

Jockey Jose Ortiz sent Strike Me Down to the lead first time by through fractions of 24.46, 49.39, and 1:12.11 while pressed by Lookin to Strike and stalked by Mr Ritz. Turning for home jockey Gary Boulanger sent Lookin to Strike to the front through 1 mile in 1:36.40. 9-2 fourth choice Curlin's Honor, 5th early, rallied late but Lookin to Strike held him off by a neck in 1:49.30. It was another 1 1/4 lengths back to Mr Ritz third. 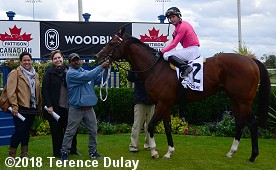 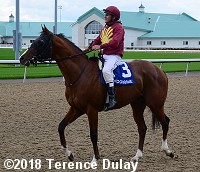 Left: Lookin to Strike in the winner's circle. Kathryn Sullivan, assistant to trainer Mark Casse said, "That was a great finish. You can't ask for more than that. Gary (jockey, Boulanger) and I were talking in the paddock and he's so confident in this horse. He said that he could do anything ¢ he could go to the lead, he could wait ¢ so you've got to love a horse like that. He rode him really smart, really confidently, and it was a great race.ö

Right: Third place finisher and beaten favorite Mr Ritz returns after the race. The Josie Carroll trainee improved his record to 3 wins, 1 second, and 1 third in 6 starts, earning $169,292 for owner-breeder Earle I. Mack.