The last Grade 1 races of the Canadian racing season were run at Woodbine on Sunday, highlighted by the 80th renewal of the $800,000 Pattison Canadian International (G1), featuring top older horses going 1 1/2 miles, 1 complete lap of the E.P. Taylor Turf Course. Overnight and morning rain downgraded the course to an officially announced going of "soft" (however the GoingStick reading taken this morning was given as 8.4 which is actually in the "good" range). It was also unusually warm for mid October in Toronto, with temperatures in the mid 70's through most of the card but after a band of heavy rain passed through before the first stakes race, the temperature quickly dropped down to 65, with mostly cloudy skies, and stiff winds of about 30 MPH gusting to 41.

Last year's 5th place finisher Idaho was sent off as the lukewarm 2-1 choice in the field of 10, winless since the Hardwicke (G2) at Royal Ascot and 8th in the Prix de l'Arc de Triomphe (G1) at Chantilly last out. In to challenge him included 4-1 second choice and defending champion Erupt off his 5th place finish in the Sword Dancer (G1) at Saratoga, and 9-2 third choice Chemical Charge, winner of his last 2 starts including the Toteplacepot September Stakes (G3) at Kempton last out. 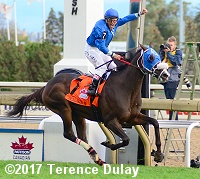 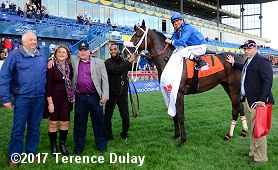 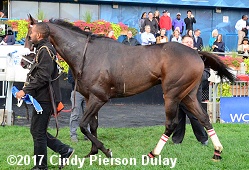 Left: Bullards Alley in the makeshift winner's circle on the course. Winning trainer Tim Glyshaw, celebrating his first Grade 1 victory, said, "He ran the best race of his life in a graded stakes at Churchill last year on a yielding turf course so we knew he liked it. But then so did the Europeans, and a lot of the others in the field. I think today, he just got first jump on them and sometimes they stay off you when you're a longshot like that and it was just too late for them. Up here (in the Singspiel) he barely got beat, that's one of the reasons we brought him back, because he seems to like this course a lot. At Arlington (American St. Leger) he had a horse make a right hand turn right in front of him. He was going to be competitive in that race, and Kentucky Downs in the last race (Kentucky Turf Cup), the turf was just too hard for him."

Right: Bullards Alley heads back to the barn. Winning owner Wayne Spalding said, "It just blew my mind. I never believed he would run that good, but he's got the heart to do it, he just hasn't got a break here lately and he finally got one. He likes the deep turf so it all worked out good." 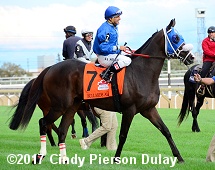 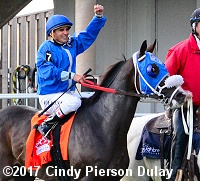 Left: Bullards Alley behind the starting gate before the race.

Right: Bullards Alley parades for the fans after the race. Winning jockey Eurico da Silva said, "I saw the horse the last five times he ran; I watched all the replays. This horse has been running a very good race. You know, he always closes. What a brilliant horse, I'm just in love with him! God helped us yesterday, it rained a lot and this guy liked the wet track. There we go!" 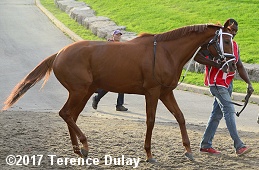 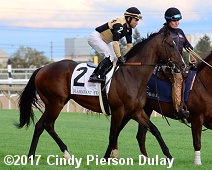 Left: Second place finsher Oscar Nominated walks over before the race. Jockey Julien Leparoux said, "I had a great trip, no excuse. I was just second-best today and the winner ran a big race. He's a nice horse and the main thing is to relax and make a big run and that's what he did."

Right: Third place finisher Flamboyant behind the starting gate before the race. Jockey Joel Rosario said, "He ran good. For a moment I thought I could be second, but Oscar Nominated kept on fighting and got us. He handled it beautifully and responded, but then steadied a little because of the soft ground. He kept fighting, but was third-best today." 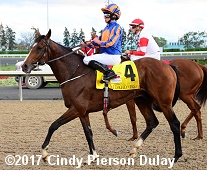 Left: Fourth place finisher and beaten favorite Idaho returns after the race. The Aidan O'Brien trainee has a record of 3 wins, 2 seconds, and 3 thirds in 15 starts, earning $1,137,911 for owners Michael Tabor, Susan Magnier, and Derrick Smith. As a result, Aidan O'Brien remains at 24 Grade/Group 1 wins for 2017, one shy of the late Bobby Frankel's record of 25 set in 2003.