Queen's Plate Day is one of the biggest racedays of the year at Woodbine and always attracts the largest crowd of the year. Those who filled the grandstand and the apron on an almost perfect Sunday afternoon were treated to five additional stakes races on the undercard, all over the firm E.P. Taylor Turf Course (GoingStick reading 11.0). Intermittent showers passed through the area during the afternoon but conditions were mostly sunny with temperatures in the low 80's accompanied by wind gusts near 30 MPH. 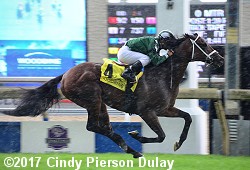 In the first stakes race, a field of 7 older horses contested the $250,000 Highlander Stakes (G2) at 6 furlongs on the turf, and new for this year, is a Breeders' Cup Challenge "Win and You're In" qualifier in the Turf Sprint division. Green Mask, second in the Jaipur Invitational (G3) at Belmont after winning the TwinSpires Turf Sprint (G3), was sent off as the 3-5 favorite over 9-2 Calgary Cat, 3rd in the Connaught Cup (G2), and 5-1 Commute, second in the Connaught.

Jockey Patrick Husbands sent Commute to the lead through fractions of 22.40 and 44.66 while pressed by 34-1 Don Camillo and stalked by 63-1 Sweet Grass Creek. Commute continued to lead to the 1/8 pole through 5f in 56.16, but Green Mask, 5th early under Javier Castellano, swept to the lead inside the 1/8 pole to win going away by 2 lengths over late-running Calgary Cat in 1:07.59, just 42/100 off the course record. It was another length back to pacesetter Commute third.
Results Chart 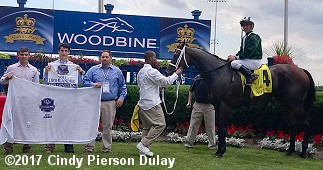 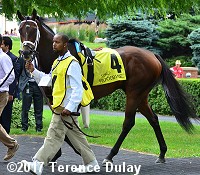 Left: Green Mask in the winner's circle. Winning trainer Brad Cox, celebrating his first win at Woodbine said, "A big reason for coming was the ‘Win and You're In' program. It worked out well. There was a little concern with running him back in 22 days but he breezed Monday at Belmont. He had a great breeze, came out of it in good order so we thought we would give him a shot."

Right: Green Mask in the paddock. Winning jockey Javier Castellano said, "He is a very straightforward horse and he's learning every single race." 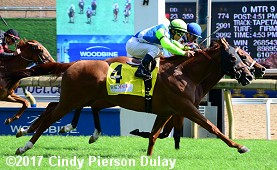 Immediately before the Queen's Plate, a field of 8 older fillies and mares contested the $175,000 Dance Smartly Stakes (G2) at 1 1/4 miles on the turf. New York Stakes (G2) 5th place finisher Suffused was the 4-5 favorite over 5-2 Rainha de Bateria, winner of the Canadian (G2) here last year but 4th in the Beaugay (G3) last out, and 11-2 Starship Jubilee, winner of the Nassau (G2), the main local prep for this event.

Jockey Julien Leparoux sent 30-1 Belle de Nuit to a clear lead exiting the dogleg through slow fractions of 25.75, 50.38, 1:15.01, and 1:38.61 while pressed by 23-1 Involuntary and stalked by Starship Jubilee. In the stretch, Belle de Nuit tired allowing Starship Jubilee and jockey Eurico Da Silva to gain the lead through 9f in 1:50.96. Rainha da Bateria, 5th early under Javier Castellano, came out 3 wide for the drive and rallied as the pair hit the line together in a dead heat for win in 2:01.91, with Involuntary finishing 1/2 a length back in third. You can see the photo finish picture here.
Results Chart 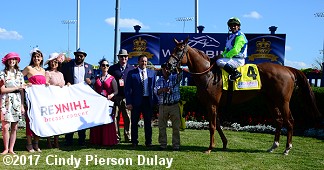 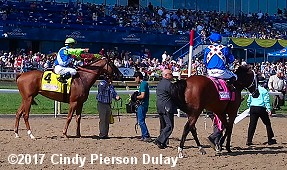 Right: Rainha Da Bateria and Starship Jubilee circle while they wait for the result of the photo. Starship Jubilee's trainer Kevin Attard said, "At first, I thought we were beat. But then I saw the slo-mo and I thought there's a chance. A mile and a quarter was a little bit of a question mark, but she had a good dosage number (in her pedigree) that she'd handle the distance well and she did." 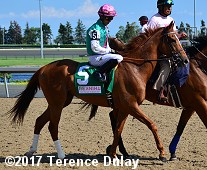 Left: Starship Jubilee in the winner's circle. Jockey Eurico Da Silva said, "She was fresh. She was very very comfortable. In the beginning she was a little rank. I was trying to hide a little behind the horse in the lead. Then she relaxed and came off the bridle. When I turned for home I thought I'd move a little bit early because I had so much horse. I said ‘I'm going to try my luck here.' I'm happy for the connections."

Right: Fourth place finisher and beaten favorite Suffused. The 4-5 choice settled in 4th under Jose Ortiz 3 lengths off the pace, but could not improve late finishing 4th beaten just 3/4 length. The Bill Mott trainee has a record of 7 wins, 5 seconds, and 1 third in 19 starts, earning $691,248 for owner-breeder Juddmonte Farms. 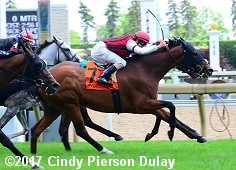 Jockey Javier Castellano sent 17-2 Shakhimat to the lead down the backstretch through fractions of 24.07, 47.07, and 1:10.59 while pressed by 8-1 Hootenanny and stalked by 44-1 longest shot Go Bro. Entering the lane Shakhimat tired allowing Hootenanny to inherit the lead through 7f in 1:22.11, but Go Bro and jockey Jesse Campbell came out 3 wide to collar Hootenanny at the 1/16 pole and outfinished him by a head in 1:34.09. It was another 1/2 length back to late-running favorite Tower of Texas third.
Results Chart 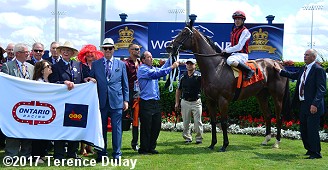 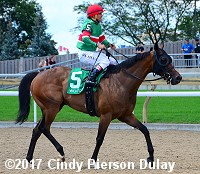 Left: Go Bro in the winner's circle. Winning trainer Mike Keogh said, "If you go back to his 2-year-old year, he was second in the Summer Stakes. So we knew he had the talent but we have had so much trouble keeping him sound. Gus finally let me castrate him and he lost all that top-heavy weight and we've been able to keep him sound now." Jockey Jesse Campbell added, "He broke sharp and I knew we were going slow so let him be there. I didn't design to be there but I was really confident that we weren't running that fast so I let him be there. And he is a bit tricky because if you pull the trigger too soon, you have moved too soon on him. It set up very good."

Right: Third place finisher and beaten favorite Tower of Texas returns to the unsaddling area. The 6-5 choice sat 6th 3 lengths off the pace under Eurico da Silva then rallied to get third beaten 1/2 a length. The Roger Attfield trainee improved his record to 5 wins, 8 seconds, and 4 thirds in 22 starts, earning $720,153 for owners Thomas Van Meter II and Scott Dilworth. 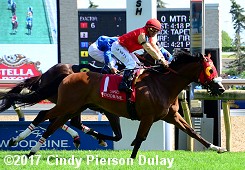 Immediately after the arrival of Ontario Lieutenant-Governor Elizabeth Dowdeswell, this year's Royal Representative, a field of 6 older horses contested the $125,000 Singspiel Stakes (G3) at 1 1/2 miles on the turf. Louisville Handicap (G3) runner-up Reporting Star was the 9-5 favorite over 11-4 Bullards Alley, 6th in the Belmont Gold Cup (G3), and 13-4 Bangkok, winner of the Valedictory (G3) to close out 2016 and then winner of an allowance last out. 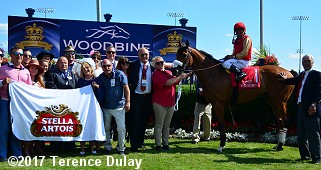 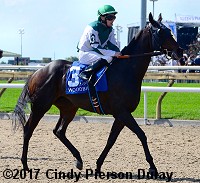 Left: Aldous Snow in the winner's circle. This is his third Singspiel victory after winning in 2014 and 2015 and was third last year. Winning trainer Malcolm Pierce said, "This horse does really well here. I was a little concerned not having a prep race for him, but it all worked out and the turf stayed fairly firm for us so he showed up again today at eight years old." He had been entered in Saturday's Dominion Day (G3) but his connections opted to scratch and run here instead. 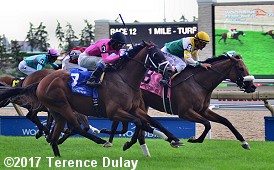 About an hour after the Queen's Plate, a field of 9 three-year-olds contested the listed $100,000 Charlie Barley Stakes at 1 mile on the turf. American Turf (G3) 7th place finisher Made You Look was the 7-5 favorite over 7-2 Yorkton, winner of the Queenston Stakes, and 5-1 City Boy, 2nd in an allowance last out.

Jockey Jose Ortiz sent 10-1 Flowmotion to the lead through fractions of 23.31, 47.17, and 1:11.62 while pressed by City Boy and stalked by 21-1 Escondera. Entering the stretch Flowmotion tired as Yorkton, 5th early under Eurico Da Silva, swept to the front through 7f in 1:23.31. 9-1 Comquest Lemonraid rallied hard from 7th early but Yorkton held him off to win by a neck in 1:35.55. It was another 3/4 length back to 15-1 Woodbridge third, while favorite Made You Look checked in 6th.
Results Chart 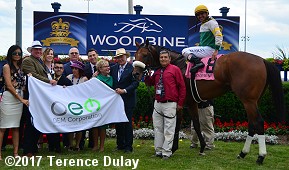 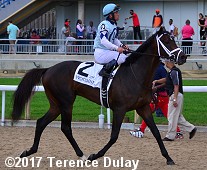 Left: Yorkton in the winner's circle. The Stu Simon trainee improved his record to 3 wins, 0 seconds, and 2 thirds in 8 starts, earning $156,388 for owner-breeder Chiefswood Stable.

Right: Fourth place finisher and beaten favorite Made You Look returns to the unsaddling area. The Todd Pletcher trainee has a record of 3 wins, 1 second, and 1 third in 9 starts, earning $270,797 for owners Let's Go Stable and Three Chimneys Farm.