The 2016 Thoroughbred meeting at Woodbine came to an end on Sunday. Conditions were typical for early December at the Toronto oval, with cloudy skies and a race time temperature of 1.5 C (34.7 F) accompanied by a light wind. The traditional closing day stakes race is the $150,000 Valedictory Stakes (G3), a 1 3/4 mile trip for older horses going around 3 turns of the Tapeta main track. Last year's winner and track record holder Melmich was sent off as ths 2-5 favorite in the field of 7, exiting a 4th plaece finish in the Marathon Stakes (G2) on the Breeders' Cup Saturday undercard at Santa Anita. In to challenge him included 15-4 second choice Aldous Snow, off consecutive allowance wins after finishing 3rd in the Singspiel (G3), and 10-1 third choice Decision Day, an allowance winner after finishing 5th in the Durham Cup (G3). 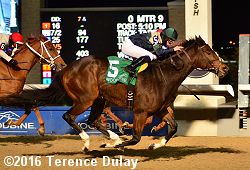 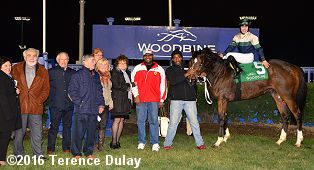 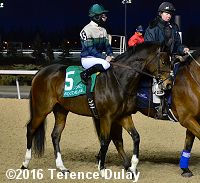 Left: Bangkok in the winner's circle. Winning trainer Phil Gracey said, "We were going to be really happy with second, but he just kept on running. He's a nice, little horse."

Right: Bangkok in the post parade. Winning jockey Emma-Jayne Wilson said, "I've had a little bit of luck in this race. It takes a really good horse with a really deep pool of stamina to get the job done, and Bangkok had that today. It was a good effort. The connections have done a marvelous job with this horse. This distance is not an easy task. My horse just kept on coming. I think the trip out to California took something out of Melmich." 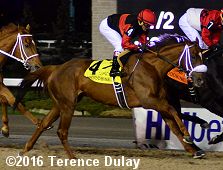 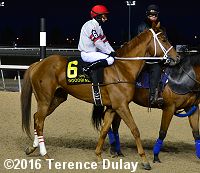 Left: Second place finisher and beaten favorite Melmich races in second first time by. The 2-5 choice pressed the pace under Eurico Rosa da Silva, led in the stretch but could not hold off the winner. The Kevin Attard trainee improved his record to 11 wins, 7 seconds, and 3 thirds in 27 starts, earning $579,890 for owners Stephen Chesney and Cory Hoffman.