Queen's Plate Day is one of the biggest racedays of the year at Woodbine and always attracts the largest crowd of the year. Those who filled the grandstand and the apron on a picture-perfect Sunday afternoon were treated to four additional stakes races on the undercard, all over the firm E.P. Taylor Turf Course (GoingStick reading 11.3). It was mostly sunny with temperatures in the low 80's and a 12 MPH headwind down the stretch. 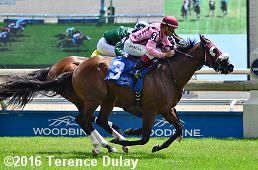 In the first stakes race, a field of 6 older horses contested the $200,000 Highlander Stakes (G2) at 6 furlongs on the turf. Breeders' Cup Turf Sprint (G1) runner-up Lady Shipman was sent off as the 1-2 favorite off her win in The Very One at Pimlico. In to challenge her included 4-1 second choice Green Mask, 7th in the Jaipur (G3) last out, and 13-2 third choice Passion for Action, second in the Connaught Cup (G2).

Jockey Patrick Husbands sent 9-1 Something Extra to the lead and he set fractions of 21.99 and 44.44 while pressed by Green Mask and Lady Shipman. Entering the lane, Green Mask gained the lead while Lady Shipman tired, through 5f in 55.82, but Passion for Action, last early, came through late to win by a neck in 1:08.05. It was a long 2 1/4 lengths back to pacesetter Something Extra third, while favorite Lady Shipman checked in fifth.
Results Chart 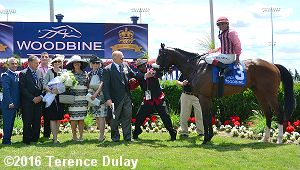 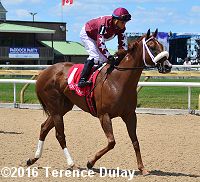 Left: Passion for Action in the winner's circle. Winning jockey Eurico Rosa da Silva said, "He's nice. I had a lot of speed to run at and I was not worrying about the speed because I knew they would come back to me. They were going very, very fast and there was a pack of three horses together. I was just concerned to save ground, which I could. I decided to stay inside and luckily I had room inside."

Right: Fifth place finisher and beaten favorite Lady Shipman returns after the race. The 1-2 choice pressed the pace within 1/2 a length under Joel Rosario but tired late to finish fifth beaten just 2 3/4 lengths. The Kiaran McLaughlin trainee has a record of 11 wins, 2 seconds, and 2 thirds in 17 starts, earning $707,003 for owner-breeder Ranlo Investments LLC. 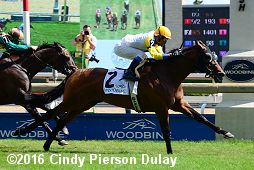 Immediately after the arrival of Ontario Lieutenant-Governor Elizabeth Dowdeswell, this year's Royal Representative, a field of 7 older horses contested the $150,000 Singspiel Stakes (G3) at 1 1/2 miles on the turf. Woodford Reserve Turf Classic (G1) 6th place finisher Danish Dynaformer was the 2-1 favorite over 5-2 Generous Kitten, winner of two straight allowance races, and 9-2 Hardest Core, winner of the 2014 Arlington Million (G1) but 8th in an allowance last out. 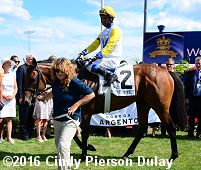 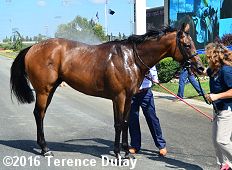 Left: Danish Dynaformer in the winner's circle. Winning jockey Patrick Husbands said, "Actually since this horse came back to Woodbine this year, I've got on him probably four or five times. He's a different horse; he's a relaxed horse. Last year, when he was 3, he was more a kid. This year, he is more business."

Right: Danish Dynaformer gets hosed off after the race. Trainer Roger Attfield has won 7 of the 12 runnings of the Singspiel Stakes. 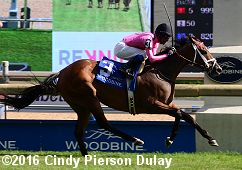 Immediately before the Queen's Plate, a field of 11 older fillies and mares contested the $200,000 Dance Smartly Stakes (G2) at about 1 1/8 miles on the turf. Last year's winner Strut the Course was sent off as the 9-4 favorite off her third place finish in the Nassau (G2). In to challenge her included 3-1 second choice Lexie Lou, winner of the Nassau but 10th in the Just a Game (G1), and 4-1 third choice Heath, third in the Gallorette Handicap (G3).

Jockey Patrick Husbands sent Lexie Lou to the front exiting the chute and she was allowed an uncontested 3 length lead chased by 26-1 Goodyearforroses and 12-1 The Tea Cups. Lexie Lou continued to lead into the stretch, as Strut the Course, 6th early, came out 4 wide and gained steadily. However, Lexie Lou easily held her off by a length for the win in 1:44.89. It was a nose back to 14-1 Nakuti third.
Results Chart 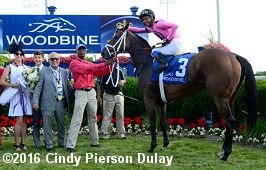 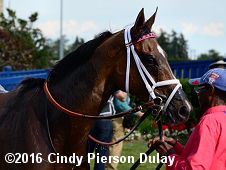 Left: Lexie Lou in the winner's circle. Winning jockey Patrick Husbands said, "She is a little funny little filly. You can't play around with her. She comes out of the gate and she wants to run, you got to let her run. She wants to relax, she relaxes. She left there pretty smart. I just gave her her head and she was enjoying it and when they were getting to her, I had enough air to come home."

Right: Lexie Lou gets hosed off after the race. 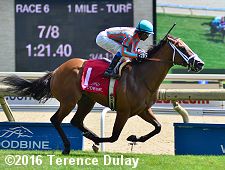 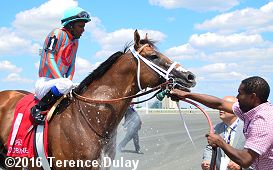 Winning trainer Mark Casse said, "We think this horse is a really good horse. When Patrick hit him I think he surprised him and he pulled himself up a little today, but he ran good." Jockey Patrick Husbands added, "When we left the gate no one wanted the lead so I had to take advantage of it. I am supposed to be riding the best horse in the race so I just let him enjoy himself."