On Sunday afternoon, a field of 13 Canadian-foaled 3-year-olds raced 1 1/4 miles over the Tapeta surface at Woodbine in the 157th running of the $1 million Queen's Plate Stakes, the oldest continuously-run stakes race in North America and the first leg of the Canadian Triple Crown. Conditions were excellent for early July in Toronto, with mostly sunny skies and temperatures in the low 80's with a headwind down the stretch. It was also a near-perfect day for Woodbine management, with $11.8 million in all-sources betting for the 13 race card, a distant second to the $67.7 million bet on the 1996 Breeders' Cup World Championships. 37,063 fans were in attendance, making this the best-attended Plate when there was not a royal visitor, topping the old record of 35,000 set last year. By comparison, 40,137 came out in 1973 for Queen Elizabeth II, and 42,243 were at the 1996 Breeders' Cup. Woodbine president and CEO Jim Lawson said, "The 157th Queen’s Plate was truly spectacular. From the racing to the parties to the fashion to the music to the weather, both longtime racing fans and those new to the Queen’s Plate experience were treated to a tremendous show. Our efforts to amplify the Queen’s Plate to new heights succeeded.”

Amis Gizmo was sent off as the lukewarm 5-2 favorite, 5 for 6 so far including the Plate Trial Stakes last out. In to challenge him included 4-1 second choice Shakhimat, second in the Plate Trial after finishing ninth in the American Turf (G2) at Churchill Downs, and 9-2 third choice Gamble's Ghost, a close second in the Woodbine Oaks afer winning the Selene (G3).

Check out the four other stakes on the card, all on the turf: the Highlander Stakes (G3) won by Passion for Action, the Singspiel Stakes (G3) won by Danish Dynaformer, the Dance Smartly Stakes (G2) won by Lexie Lou, and the Charlie Barley Stakes won by Conquest Enforcer. 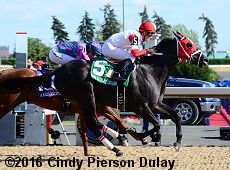 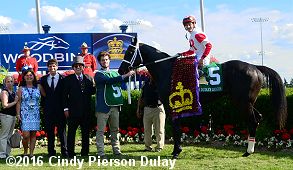 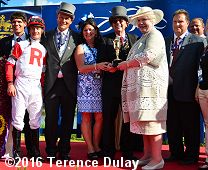 Right: The Honourable Elizabeth Dowdeswell, Lieutenant Governor of Ontario presents the Queen's Plate trophy to winning owner Ken Ramsey. Ramsey said, "Especially gratifying because I am actually directly descended from King Edward III and Sir Dudley Digges was thrown in the Tower of London for a transgression he made for making a remark about the King. They were doing a parliament House of Lords debate talking about the divine right of kings and he said he didn't believe in the divine right because he grew up with the king and he put his trousers on just like he did, one leg at a time, and for that they threw him in the Tower of London. I've been over and checked all that out. It's true. So I think it is very nice to win the Queen's Plate with his namesake." 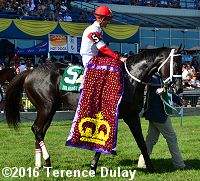 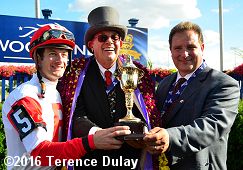 Left: Sir Dudley Digges parades for the fans after the race. Winning jockey Julien Leparoux said, "It feels great. It's an amazing feeling. He ran a big race. I am happy for the horse's connections. The trip today, I think, was the key. He broke good. He put me in a good spot. In the first turn they slowed down so much I was a little bit worried. In the backside they started picking it up. He just grinded and grinded the whole way. I rode him at Keeneland on the grass. Last time (third in the Plate Trial) I couldn't come and ride him. I knew he had a shot. It was the trip we needed."

Right: Jockey Julien Leparoux, owner Ken Ramsey, and trainer Mike Maker pose with the trophy and flower blanket. It was the first Queen's Plate win for all three of the connections. 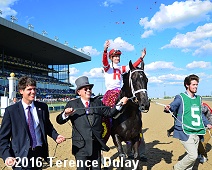 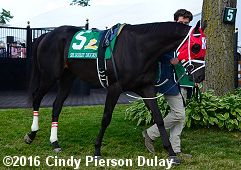 Left: Owner Ken Ramsey leads Sir Dudley Digges to the winner's circle as Julien Leparoux tosses flowers in the air. Just after this the horse was spooked by the flowers and knocked Ramsey to the ground. Ramsey added, "This takes a treasured spot in my trophy collection at home. I only have two other things I treasure above this one, trying to win the Kentucky Derby and the other is trying to win a stakes race at Royal Ascot. I've had a couple of seconds over there, but I got the third one so that's good. You can quote me: we are going for the Triple Crown. I think this horse can run on grass, Tapeta, dirt, you name it."

Right: Sir Dudley Digges in the paddock before the race. The 2016 Canadian Triple Crown continues with the $500,000 Prince of Wales at Fort Erie contested over 1 3/16 miles on a dirt track on Tuesday July 26, and concludes with the $500,000 Breeders' Stakes over 1 1/2 miles of Woodbine's turf course on Sunday August 21. 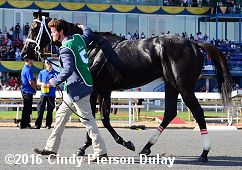 Left: Sir Dudley Digges heads back to the barn after the race. Winning trainer Mike Maker said, "He's a good, laid-back horse. It just took him a while to come around. Early on, we liked him, but he had a tendency to hang. He should have broken his maiden a lot earlier than he did." Maker said that Sir Dudley Digges will go on to the Prince of Wales Stakes, since he trains over the Churchill Downs dirt track, and is likely for the Breeders' Stakes given that he started as a turf horse and broke his maiden over the Keeneland course.

Right: The horses break from the gate for the 157th Queen's Plate. 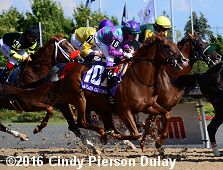 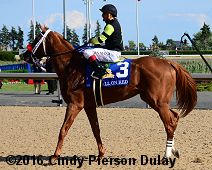 Left: Second place finisher Amis Gizmo in traffic as they pass by for the first time. Jockey Luis Contreras said, "I had a perfect trip. I have no excuses at all. I thought the pace went a little more quickly than :49 (:49.92), but I was right there. I tried to relax my horse as much as I could and wait until the quarter pole to make my move. They just got me at the end. We were second best. He was fighting back. He pinned his ears back and kept running but the winner had a little bit more."

Right: Third place finisher All On Red returns after the race. Jockey Eurico Rosa da Silva said, "My trip was okay, but my horse was running a little bit too relaxed. Next time we'll put blinkers on him and he'll be a different horse. He handled the distance no problem. A mile and a half will be great for him." 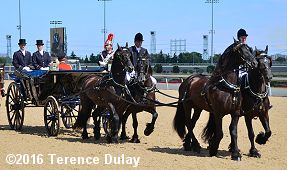 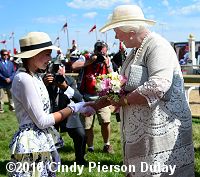 Right: After exiting the landau, she was first welcomed to Woodbine by president and CEO James Lawson, and was handed a bouquet by flower girl Olivia Soares. Lawson then escorted Her Honour across the turf course and up the steps to the Royal Box on the second floor clubhouse.