The 149th running of the $1 million Queen's Plate Stakes was contested at Woodbine Racetrack in Toronto on Sunday. The oldest continuously-run stakes race in North America is Canada's version of the Kentucky Derby, with a field of 14 Canadian-foaled 3-year-olds (including 1 filly) going the Derby distance of 1 1/4 miles over the polytrack, carrying scale weight of 126 pounds for males and 121 pounds for fillies. Originally 15 were drawn but Sam-Son Farms entrant Harvest Home was scratched the morning of the race. Trainer Mark Frostad said, "He injured himself in his stall a couple of days ago (after entries had been taken on Thursday morning). It was minor. It may well be minor. We did some work on him and he still wasn't 100%, maybe 95%. But it's not worth taking a chance." Racing conditions were ideal with temperatures in the low 70's and partly cloudy skies, however, a brief thunderstorm passed through the area about an hour before the Plate, drenching the area for about 20 minutes.

The lone filly in the race, Woodbine Oaks and Calder Oaks winner Ginger Brew, was sent off as the 2-1 favorite, coming into the race off a 3 race winning streak. In to challenge the Frank Stronach homebred daughter of Milwaukee Brew were 3-1 second choice Solitaire, a maiden in two starts so far but a close second in the Plate Trial last time out for New York-based trainer H. James Bond. Not Bourbon, the 9-2 third choice, won the Plate Trial and the Queenston Stakes for trainer Roger Attfield and owner-breeder Charles Fipke, who raced Tale of Ekati in the U.S. Triple Crown.

24-1 shot D. Flutie was allowed an uncontested lead of as many as 3 lengths for the first 3/4 mile, getting fractions of 23.40, 47.60, and 1:13.55 over the polytrack. 23-1 Shadowless, 62-1 Dylan's Choice, and Not Bourbon stalked the pacesetter around the clubhouse turn and down the backstretch. Entering the far turn, D. Flutie tired and faded as 22-1 Deputiformer, who had raced in seventh early, moved up to take the lead into the stretch, getting the mile in 1:39.30. However, Not Bourbon was full of run, as jockey Jono Jones switched him to the outside for room and he responded, easily taking over the lead at the 3/16 pole and opened up a 1 1/2 length lead on favorite Ginger Brew, who had raced in fourth the whole way. Ginger Brew gained steadily but Not Bourbon held her off by a neck at the line, completing the distance in 2:03.59, just 8/100 second off the track record. It was a long 4 1/2 lengths back to late-running Solitaire, who was last on the far turn and closed well from the 7 path.

Woodbine has put the saddle cloths from the Queen's Plate horses up for sale on eBay with the proceeds going to the LongRun Retirement Society which is an adoption and placement programs for thoroughbred racehorses here in Canada. The saddle cloths are signed by the jockey and can be viewed here. 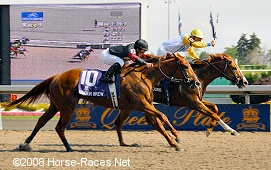 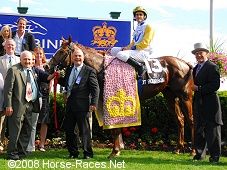 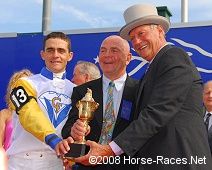 Left: Not Bourbon in the winner's circle. Trainer Roger Attfield, who tied the record with eight Queen's Plate victories, said, "Well, I know he won't lie down on me. He'll run his heart out and that's exactly what he did. He had to move a little earlier than he wanted to. But he just gutted it out. He's just a very good horse. This horse thrives on work and you don't go into (the Queen's Plate) half-cocked. He loves to train and he wants to work fast. If I'd gone easier on him, he would have been too rank in this race, probably wouldn't have rated and we wouldn't have won." 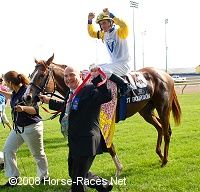 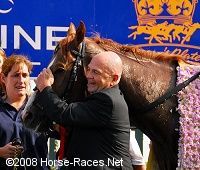 Left: Owner Charles Fipke leads Not Bourbon while jockey Jono Jones celebrates. Fipke, winning his first Plate with his first starter, said, "It's just wonderful. I just felt he was going to do it. He had great competition. Ginger Brew is a fine horse. Somebody has to win, though. The Plate is the most prestigious race in Canada and this has been a total team effort, from Russ Bennett who buys my mares to Jack Werk my bloodstock (advisor) to Roger and his staff. I was pretty disappointed in (Tale of Ekati) not winning the Kentucky Derby and the Belmont. This sure makes up for it." 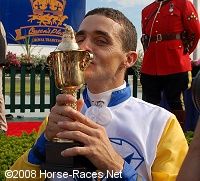 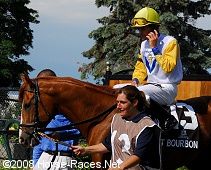 Left: Jockey Jono Jones gives the Queen's Plate trophy the traditional kiss in the winner's circle. Jones, winning his first Plate, said, "Roger did a fantastic job with this horse. At the beginning (of the racing season), I had my doubts if he could get 7/8, to be honest. When he ran the 1 1/8 miles (Plate Trial), he won, but he got a little tired in the end. I still had my doubts about 1 1/4 miles. But he ran his eyeballs out today. Actually, because I get on him so much (for morning workouts and races), I know him so well. I knew exactly what he needed to win and he got it. He broke good and got right behind a couple of speed horses. I moved a little bit sooner than I wanted because Deputiformer pushed me out when he wanted to move."

Right: Not Bourbon with Jones aboard in the paddock shortly after "rider's up." 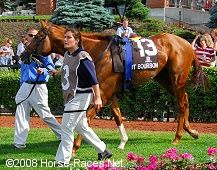 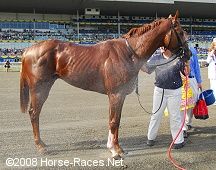 Left: Not Bourbon in the paddock before the race. Trainer Roger Attfield said, "This is fantastic for me. It's not an easy race to win and it's been a few years since I won the seventh one (in 1995). It's just a great thrill. I love breaking records. I hold the record for the Prince of Wales and the Breeders and I wanted to at least equal this one. Now I have to worry about beating it."

Right: Not Bourbon gets hosed down before heading back to the barns. 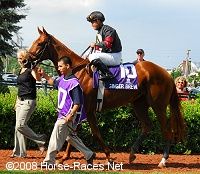 Second place finisher and beaten favorite Ginger Brew in the paddock before the race. Her jockey Javier Castellano said, "She ran a very good race. She's second-best today, that's all. She was perfect. She had a good trip following the winner. She showed up today. I'm happy for that."

Her trainer Brian Lynch said, "She got into a little traffic down the backstretch and then hung quite wide into the stretch. Hey, she laid it down, I was thrilled at where she finished and that she gave the fans what they wanted. She was legitimately the favorite and the two of them drew off and made a hell of a race of it. We're probably going to give her a break for a little bit now and look at the Breeders' (Stakes) for a mile and a half (on turf)." 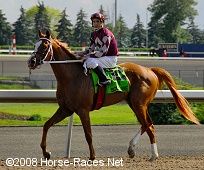 Third place finisher Solitaire returns after the race. His jockey Robert Landry said, "I had a wide trip. I could never get him to tuck him out. I feel bad for the connections because I think they ran a competitive horse. I think if I could have saved a little bit of ground that could have made the difference. He was coming. He ran a lot further than the rest of the horses. I'm proud of the horse to be able to do what he did from the trip he got." 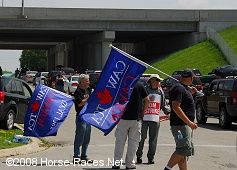 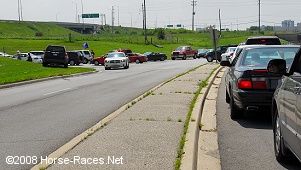 Fans arriving at Woodbine for the Queen's Plate were disrupted by a Canadian Auto Workers picket line. The security guards for the slot machine facility, which is run by the provincial government and not by the racetrack, have been on strike for 3 weeks and decided to escalate their protests on Queen's Plate day, unfairly targetting the wrong people, as racing fans, track employees, and horsemen, along with people attending an event for a children's charity, who have nothing to do with the strike or the slots facility, were delayed on their way in. We were in this lineup for 1 hour. This article in the Globe and Mail describes the situation perfectly. 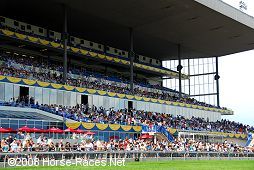 Despite the best (worst?) efforts of the strikers, there was still a large crowd in the stands for the Queen's Plate. Obviously not many people sympathized with them.