Although the prestigious Queen's Plate is contested on the main Polytrack at Woodbine, there are two stakes races on the undercard that are run over the E.P. Taylor Turf Course. Kicking off the stakes action on Plate day is the $200,000 Scotts Highlander Stakes (G3), a 6 furlong sprint on the turf for older horses. A field of nine went to post with Maryland-based Heros Reward sent off as the 6-5 favorite, exiting victories in the Turf Sprint Handicap at Calder and then the Baltimore City Turf Sprint at home at Pimlico on Preakness day. In to challenge the Dale Capuano trainee were 9-2 second choice Quietly Mine, third in the Red Wing Dream Stakes at Belmont Park last out, and 6-1 third choice Indian Ashton, exiting an allowance win at Churchill Downs. 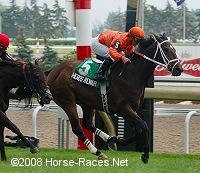 As expected, Heros Reward and Indian Ashton hooked up on the front end soon after the start and battled through a quarter in 22.52 and a half in 44.56 over the firm turf course. 18-1 Gantu stalked the pacesetters in third into the lane. At the top of the stretch, Indian Ashton tired and faded to eventually finish fourth, allowing Heros Reward to open up a 3 length lead at the 1/8 pole after 5 furlongs in 55.76. 15-1 The Great Caruso, who was fourth early, rallied well late but was left with too much to make up as Heros Reward easily held him off by 3/4 length at the line in 1:08.02 for the 3/4 mile trip. It was another 2 lengths back to 8-1 Wollemi Pine third.
Results Chart 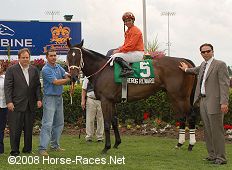 Heros Reward in the winner's circle. Winning jockey Javier Castellano said, "I've been riding the horse a long time. I always feel comfortable with him. Today he was pretty sharp. He wanted to run and I let him go."

Winning trainer Dale Capuano said, "I prefer him a little bit off the pace so he's got something to run at. When he's in front, he kind of fools around. He looks around, switches leads back and forth, doesn't really concentrate. It worked out well. Hopefully we'll be back for the Nearctic (October 4). We had good luck in that race last year and then maybe the Breeders' Cup (Turf Sprint)." 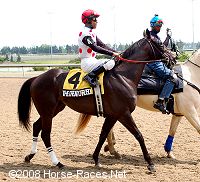 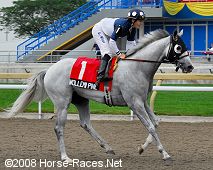 Left: Second place finisher The Great Caruso in the post parade. The 14-1 shot raced in fourth into the stretch under jockey Patrick Husbands, came out wide into the lane and rallied determinedly to get second beaten 3/4 length. The Malcolm Pierce trainee improved his record to 3 wins and 2 seconds in 9 starts for owner-breeder Live Oak Plantation.

Right: Third place finisher Wollemi Pine returns after the race. 8-1 Wollemi Pine raced fifth under jockey Emma-Jayne Wilson, angled out at the top of the lane and rallied to get third beaten 2 3/4 lengths. The Ian Black trainee improved his record to 4 wins, 3 seconds, and 2 thirds in 18 starts for owner Kinghaven Farms. 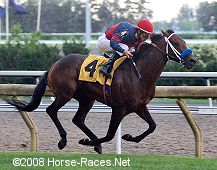 The $150,000 Singspiel Stakes (G3) featured a field of 12 older horses going 1 1/2 miles, one complete lap of the turf course. Last year's Breeders' Stakes winner Marchfield was the 2-1 favorite over 7-2 Rahy's Attorney, winner of the Connaught Cup last time out, and 4-1 Mission Approved, exiting a seventh place finish in the Kingston Handicap at Belmont Park. A sudden thunderstorm hit the track area while the field was in the walking ring, so the paddock judge ordered the horses back to the indoor saddling area. The rain stopped just as the race got underway, but the 20 minute downpour downgraded the originally "firm" course to "good".

Jockey Ramon Dominguez sent Mission Approved to the lead early under strong restraint, and he set a pace of 25.20, 50.41, 1:15.28, 1:40.37, and 2:05.66 while as many as 2 lengths clear of the rest of the field, led by 11-1 Tap Show and Rahy's Attorney. At the top of the stretch, Tap Show tired to eventually finish last, allowing Rahy's Attorney to inherit second place. However, Mission Approved took full advantage of the slow early pace and easily held him off through the stretch, cruising under the line 1 1/2 lengths ahead in a slow time of 2:30.63. It was a long 5 3/4 lengths back to late running 43-1 longshot Dubai Gold third, while favorite Marchfield raced in midpack early but showed no late response, finishing a disappointing eighth.
Results Chart 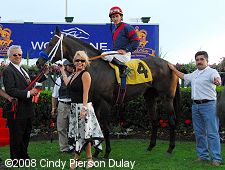 Mission Approved in the winner's circle. Winning owner and breeder Dr. William F. Coyro Jr. (left) said, "We were very confident in him. It's very nice to bring a horse by With Approval back to Canada and win a big race. I can't be happier. The way Woodbine has treated us has been fantastic. He really goes to the front, but he's got a tremendous amount of stamina. So we were pretty confident once he got the lead that he was going to keep it. I think we're going to look at a couple of graded stakes races (in the future), 1 3/8 miles, 1 1/2 miles, and point to the Breeders' Cup (Turf), hopefully." 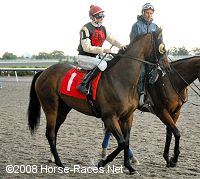 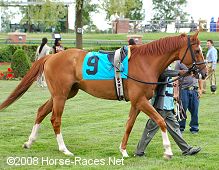 Left: Second place finisher Rahy's Attorney in the post parade. The 7-2 second choice stalked the pace from the hedge in third for the first 10 furlongs under jockey Slade Callaghan, finished well but could not gain on the winner. The Ian Black trainee improved his record to 6 wins, 2 seconds, and 3 thirds in 14 starts for owner-breeder Ellie-Boje Farm.

Right: Third place finisher Dubai Gold in the paddock before the race. The 43-1 outsider was well back early, closed gradually entering the stretch under jockey David Clark, but never threatened late, finishing third beaten 7 1/4 lengths. The Alec Fehr trainee improved his record to 6 wins, 3 seconds, and 5 thirds in 23 starts for owner Terry Hamilton.