The Queen's Plate, scheduled for June 22 this year, kicks off the Canadian Triple Crown, and is restricted to Canadian-bred 3-year-olds. The last major local prep for the Plate is the $150,000 Plate Trial Stakes, run exactly 3 weeks before the big day. Entrants carry the same weight, 126 pounds, that will be assigned for the Queen's Plate over a distance of 1 1/8 miles, 1 furlong shorter than the Plate.

A field of seven hopefuls went to post on a cool, cloudy afternoon at Woodbine with temperatures in the low 60's. Frank Stronach's undefeated homebred Harlem Rocker was sent off as the 3-10 favorite. He was originally targeting the U.S. Triple Crown and came into the Trial off a win in the Withers at Aqueduct in his last start. In to challenge the Todd Pletcher trainee was 4-1 second choice Not Bourbon, winner of the Queenston Stakes by 5 lengths last time out, who was stretching out to 2 turns for the first time. The rest of the field was at double digits, including 10-1 third choice Pewter, winner of a maiden race at Gulfstream in May and shipping in from Saratoga for trainer H. James Bond.

When the gate opened, jockey Patrick Husbands sent Pewter to the front out of the far outside post, and once over to the rail, slowed the pace down to dawdling fractions of 24.18 and 48.67 over the Polytrack surface. 38-1 East End Tap and second choice Not Bourbon stalked him just a length behind, while Harlem Rocker was unhurried early, settling at the back of the field under regular rider Eibar Coa and going wide around the clubhouse turn. With 3 furlongs to go, 20-1 Sebastian's Song, who had rated in fourth early, moved up on the outside to take the lead away from Pewter, who faded badly to eventually finish last. Not Bourbon was asked by Jono Jones at the 1/4 pole and he accelerated past Sebastian's Song with 3/16 to go, opening up a 1 1/2 lead at the 1/8 pole after a mile in a slow 1:37.12. 10-1 Solitaire, who was sixth early, found room along the rail to close with a rush, but Not Bourbon held him off late to win by a neck in 1:49.73, just 0.18 seconds off Leonnatus Anteas' track record. It was another 3 1/2 lengths back to Sebastian's Song third, while favorite Harlem Rocker, who was wide throughout, attempted to close on the turn but flattened out in the stretch to finish fourth, 5 3/4 lengths behind the winner. 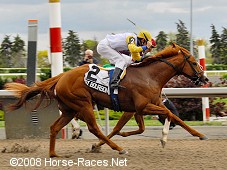 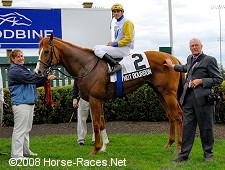 Not Bourbon in the winner's circle. Winning trainer Roger Attfield (right) said, "Hopefully he can get that other 1/8 mile (in the Plate). He's a dead fit horse. And he acted very well today in the paddock and in the warm-up. Hopefully we can go on to the next step and get my eighth Queen's Plate (which would tie him with trainer Harry Giddings Jr.), because I'm dying to get it. He's just a very, very nice horse. With his pedigree, if you go through it, like Mr. (owner Charles) Fipke has, there's no doubt he can go 1 1/4. But the way he trains and runs, you wonder about it. It's not going to be an easy task. But he's got a big heart and a tremendous amount of ability. So hopefully we're there in 3 weeks time and get our picture taken." 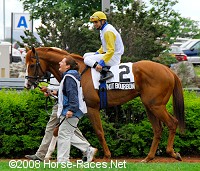 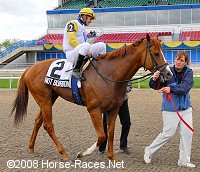 Left: Not Bourbon in the paddock before the race.

Right: Not Bourbon returns after the race. Winning jockey Jono Jones said, "That horse (Pewter) won his last on the lead, so I figured he's the speed horse. I thought if (Not Bourbon) could get in behind him and relax, we could do something good. And it worked out. When I saw (Harlem Rocker) at the 1/4 pole, I said I better go before he comes, but he never came. Roger has done such a fantastic job with this horse. I even had my doubts about the horse getting 1 1/16 miles. He keeps surprising me all the time. And I hope he keeps on doing it." 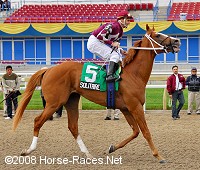 Second place finisher Solitaire returns after the race. The 11-1 fourth choice raced about 4 lengths off the pace early in traffic, then when asked by new jockey Robert Landry, split horses and rallied well along the inside, just missing at the end in just his second lifetime start. The H. James Bond trainee improved his record to 0 wins, 1 second, and 1 third in 2 starts, earning $33,780 for owner William Clifton Jr. 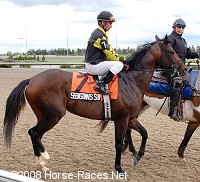 Third place finisher Sebastian's Song in the post parade. The 20-1 outsider rated in fourth while three wide around both turns under new jockey David Clark, took the lead at the 3/8 pole, getting 6 furlongs on 1:12.98, but was headed by the winner at the top of the stretch and gave way late. The Alec Fehr trainee improved his record to 2 wins, 0 seconds, and 1 third in 4 starts, earning $94,360 for owner Centennial Farms Inc. 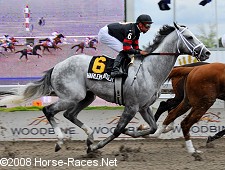 Fourth place finisher and beaten favorite Harlem Rocker in last place as they pass by the first time. Harlem Rocker raced off the pace under regular rider Eibar Coa, was hustled 3-wide on the far turn but lacked a response when asked, finishing fourth 3 1/2 lengths behind Sebastian's Song, suffering his first career defeat after winning his first three starts. The Todd Pletcher trainee's record stands at 3 wins in 4 starts, earning $148,500 for owner-breeder Frank Stronach.