The highlight of the Canadian racing calendar, the Queen's Plate, was contested on Sunday afternoon at Woodbine. As per tradition, a Royal representative is in attendance. This year, Her Excellency the Right Honourable Adrienne Clarkson, the 26th Governor General of Canada, arrived in the horse-drawn landau, accompanied by her husband His Excellency John Ralston Saul, the landau accompanied by the Royal Canadian Mounted Police Equitation Section. As the Governor General, Ms. Clarkson carries out Her Majesty's duties in Canada and is Canada's de facto Head of State. She is the first Governor General to attend the Queen's Plate since 1994.

In this, the 144th running of the classic event for 3-year-old Canadian breds, owner Gus Schickedanz and trainer Mike Keogh sent out their one-two punch of Wando and Mobil, their stable stars who have never competed against each other. Wando was sent off as the 7-5 favorite in the field of twelve, with Mobil the second choice at just over 2-1. Also entered was Rock Again, from the powerful Stronach Stable with star jockey Eibar Coa shipping in to ride the 9-2 third choice, and Shoal Water representing Sam-Son Farm, a stable which has seen much success in the Plate over the years.

After a delay in the start due to longshot Dance Engagement refusing to load into the gate, the field was sent underway and Shoal Water was quickest out of the gate, holding the lead for the first 3/16 of a mile. Mobil wasn't so lucky, bobbling at the start and having to be hustled up early by jockey Todd Kabel. By the time the field got to the finish post first time by, favorite Wando had taken an inside path and seized the lead, getting the initial quarter mile in 24.04 seconds. Around the clubhouse turn, Wando held Shoal Water and stablemate Mobil at bay. Loose on the lead by 2 1/2 lengths entering the backstretch, he got the half in a brisk 46.67, with jockey Patrick Husbands allowing Wando to relax and control the pace on the front end. Shoal Water continued to stalk him to his outside, with Mobil always close at hand. At the end of the backstretch, Shoal Water closed the gap to just a length, the favorite traveling six furlongs in a brisk 1:11.93. By this point Eibar Coa got Rock Again into motion, having suffered a bumpy start at the hands of longshot Illusive Force and settling back as far as seventh early.

Turning for home, Shoal Water succumbed to the hot pace up front and began to fade, eventually finishing fourth. At the top of the stretch, Wando began to pull away under Husbands' urging. Now 1 1/2 lengths clear of the tiring Shoal Water, he got the mile in 1:37.46, as his stablemate Mobil inherited second place. By the 1/8 pole it was over. Wando was clear by 5 widening lengths and Kabel, who had first choice of either favorite and chose Mobil, could only watch as Husbands and Wando continued to draw off, finishing 9 lengths clear. The final time of 2:02.48 over the fast main track was a whopping 4.40 seconds faster than T J's Lucky Moon's winning time in last year's edition, but almost 1 1/2 seconds slower than Alphabet Soup's track record. Rock Again came on well using a four wide move on the turn, seizing third place from Shoal Water inside the final furlong, finishing 1 1/2 lengths back of Mobil. 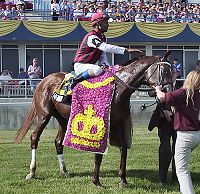 Wamdo gets his flowers before parading on the turf course for the fans. Winning jockey Patrick Husbands said, "At three-quarter pole, everybody backed off me. My horse was galloping along down the backside, I knew it would take a very good horse to pass him at that stage. Down the lane, when he responded with the stick, I knew he was the horse. He took off. At the eighth pole, I just looked over my shoulder and saw nobody. I looked over my right side to make sure nobody was coming, that's when I knew I was home and cooled out." 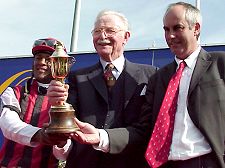 Jockey Patrick Husbands, owner Gus Schickedanz, and trainer Mike Keogh celebrate with the Queen's Plate trophy. Winning trainer Mike Keogh said, "We knew we would be on the either on the front end or right there, and he just galloped along and did it very easily. At the top of the stretch, he looked like he was just galloping along, I thought it would take a serious horse to catch him at that point." 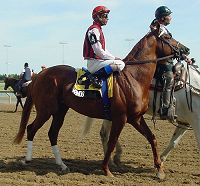 Wando in the post parade for the Queen's Plate. Trainer Mike Keogh was asked if he would continue on with the Canadian Triple Crown at the Prince of Wales Stakes, and he said he would and Patrick Husbands would keep the ride. 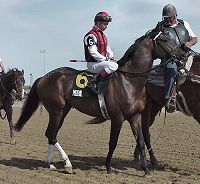 Second place finisher Mobil in the post parade. His jockey Todd Kabel said, "My horse stumbled badly leaving the gate and I don't know if that affected him in any way. He really struggled with the track. I couldn't get him up on the bridle. I'm just very happy that he finished second because I didn't think he was going to get any part of it. He dug in and ran a very determined race." Asked about his apparently "wrong" choice of horse, he said, "I am just happy for them. That's racing luck and that is the way it goes. You know, you make the right moves, you make the wrong moves, that's part of the sport." 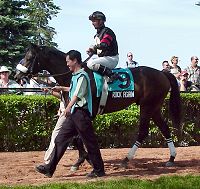 Third place finisher Rock Again leaving the walking ring. His jockey Eibar Coa said, "I really had a good trip and don't really have any excuses today. The horse (Wando) in front was just much the best today. I was going fast, but he never stopped running and he never slowed down. He really won impressively today. I really think my horse ran his race and I was happy with the way he ran." 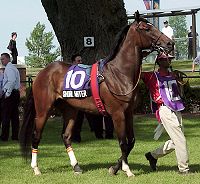 Fourth place finisher Shoal Water in the walking ring. His jockey Robert Landry said, "My horse ran a fantastic race. I stalked the winner (Wando) the whole way. Patrick (Husbands) just asked his horse and he kicked on. He (Wando) was the horse today. You give him a lead and he's going to benefit and he's going click. I didn't want to chase him early. I didn't think that would be the right thing to do."